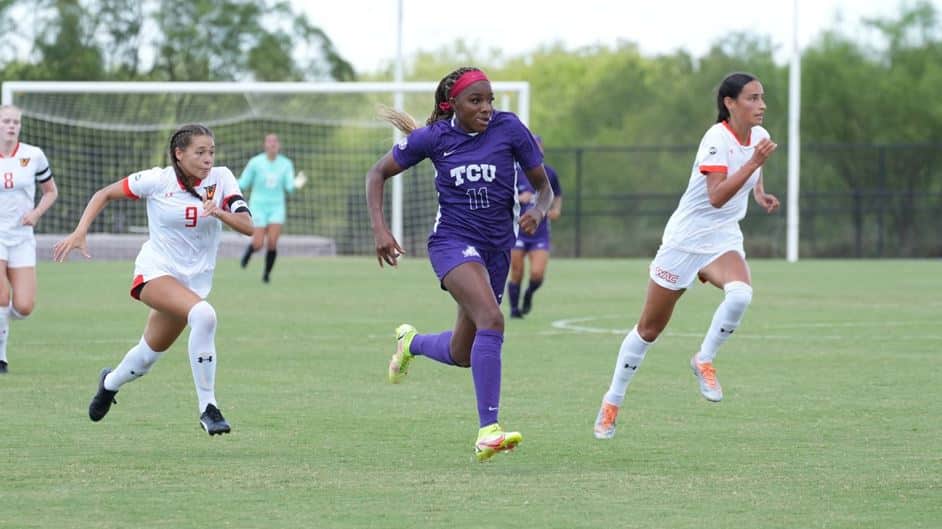 The action was as hot as the weather Sunday in South Texas, but No. 7 TCU had no trouble in its first road match of the season.

Bright, a senior, was already the program’s career leader in goals. She now has 43.

“She has goal-scoring qualities,” coach Eric Bell told gofrogs.com. “She’s an All-American, and I don’t expect these kind of things, but I know she is capable of doing those kind of things. She’s a wonderful talent and she can score goals in a lot of different ways, and it’s hard to deal with from a defending perspective.”

TCU wasted little time Sunday as Bright scored two minutes into the game. Freshman A.J. Hennessey scored her first career goal later in the first half on a corner kick from Tyler Isgrig.

Isgrig, also a freshman, has been a great early addition to the Frogs. Her ability to place the ball on set pieces, both on corner kicks and foul kicks, has created many scoring chances so far.

“We’ve been working on set pieces quite a bit,” Bell said. “It’s important to be diverse from an attacking perspective and, with no overtimes, you have to figure out how to manufacture goals and win games in regulation as opposed to ties. We’ve been working a lot of these different set pieces to be sharp on them. We have people serving good balls and people attacking the ball, and we’re converting a lot of these chances.”

TCU had 31 corner kicks entering Sunday, which ranked third in the nation. The Frogs were able to add another eight opportunities Sunday, scoring on two of them.

Though it’s been a small sample size, it seems that TCU’s game plan is to use its speed to wear opponents down in the first half and take advantage of that in the second. The Frogs scored two goals late in the second half to beat Minnesota, added  five second-half tallies against Santa Clara, and added three against UT-Rio Grand Valley.

The Frogs came out blazing in the second half as Bright quickly added her second goal of the game, and netted her third minutes later on a header. Later on Michelle Slater scored her first goal of the season and fourth of her career on another set piece from Isgrig.

Highly touted freshman goalkeeper Azul Alvarez made her first career start. Alvarez, a member of the Mexican Women’s U20 national team, recorded her first shutout on only three shots.

It wasn’t all smooth sailing, though. Team captain Gracie Brian, celebrating a birthday, left the match early with a lower body injury. An update on her status will be provided later in the week.

The Frogs play again at 5 p.m. Thursday at USC as they close out a two-game road trip.