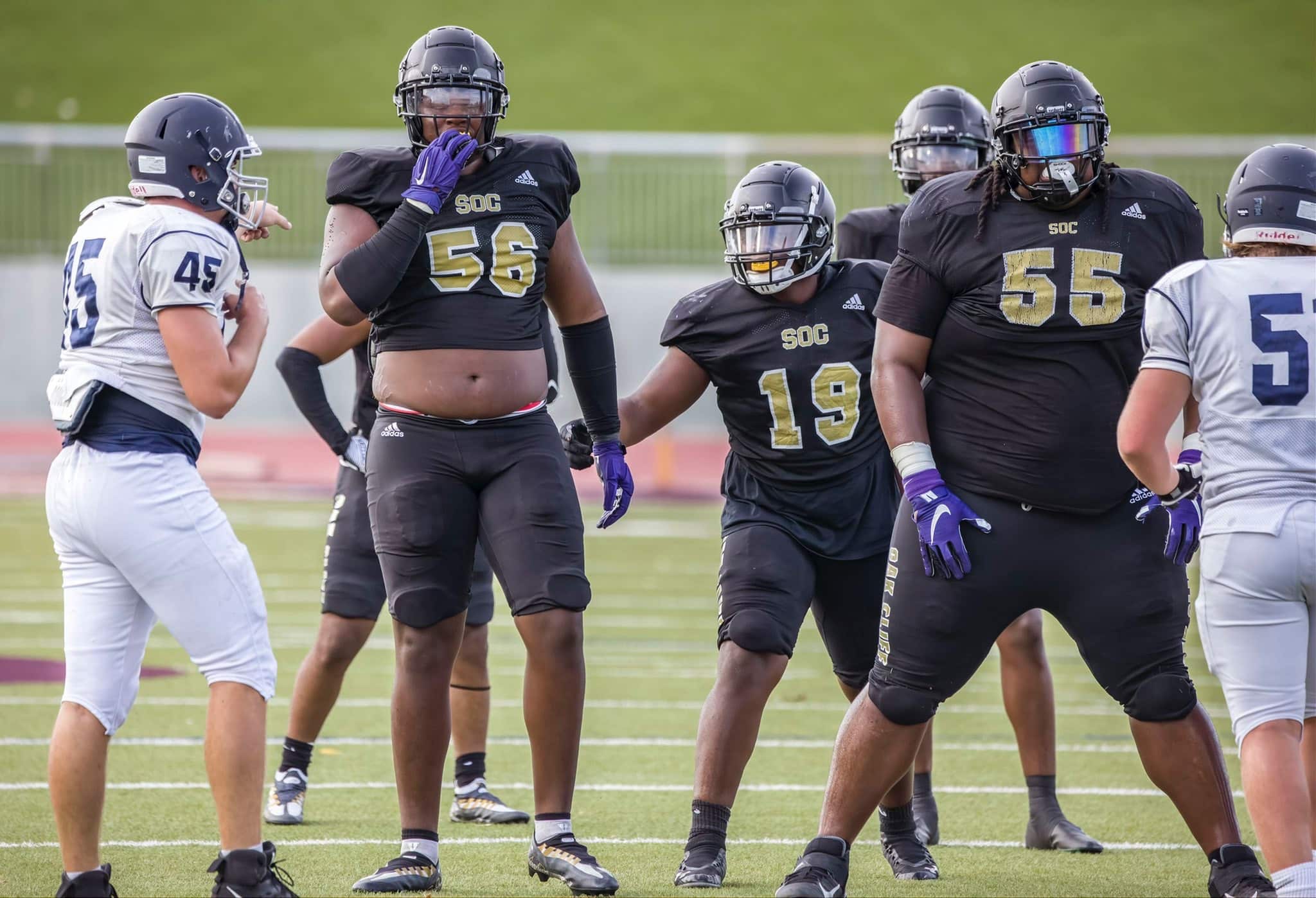 Brionne “Bubba” Ramsey-Brooks, the 2023 massive offensive lineman from South Oak Cliff High School, has been committed to TCU since May 20.

Dave Campbell’s Texas Football recently did a feature on the prospective student-athlete. Before I take you to that, I wanted to outline what type of player Ramsey-Brooks is, as he committed before I started with FrogsToday.com.

Ramsey-Brooks is listed at 6-foot-5, 380 pounds. While a debate can be made within an inch or so of his height, his weight is not a “game-program listing,” rather it is fairly accurate.

At first glance, one would think a player in high school with this frame would struggle with footwork, something critical for any successful offensive lineman.

However, when you turn on Ramsey-Brooks’ highlight film, you see play after play of the big, strong lineman getting up to the second level of the defense with ease.  In addition, he does an amazing job of “locking” on to defenders and has an elite “finish” to his game.

This is a lineman who is able to garner impressive extension with his arms while run blocking. When you combine this with the fact that Ramsey-Brooks doesn’t let defenders loose after his initial contact, it all leads to a film littered with defensive players strewn all over the field.

The reason for this, in my opinion, is one-part skill, size and ability and one part nastiness. Generally, you have to develop the nasty side of an offensive lineman at the collegiate level. However, Ramsey-Brooks seems to inherently have the desire to drive defenders into the ground, and that will certainly make any offensive line coach happy.

The imposing offensive lineman can dunk a basketball.  Yes, on a 10-foot hoop. Until verified by multiple coaches, I thought this might have been an urban legend.  Then, after watching the big man run and move on the football field, it does not seem too outrageous.

This is a player who will continue to work on keeping his hands within the framework, but the good thing is that this is a learned skill. Luckily for Ramsey-Brooks and the Frogs, the skills he was born with are off the charts.

Bending at the ankles, knees and hips is always evaluated as an offensive lineman. Once again, the big man shows exceptional flexibility in these areas and his overall athleticism would be considered high for any high school lineman, regardless of size.

During his junior season, he would tend to stand a little tall in run blocking. Frankly, he did not need to get lower or under people in order to move them. I am by no means an expert in physics, however I did happen to remember Isaac Newton’s Second Law of Motion, Force = Mass x Acceleration (I am pretty sure I wrote this on my hand at some point in high school).

Early on as a senior, Ramsey-Brooks has shown the ability to lower himself and sink his hips, making him even more dangerous. What this also shows is Ramsey-Brooks’ ability to take coaching and continually improve.

Moreover, along with his physical skills, Ramsey-Brooks was also born with leadership skills, and by all accounts, the gift of being persuasive. Two months after his commitment to TCU, fellow high school classmate and linemate, “Big Mike” Stoker, committed to the Frogs.

It can be found here.