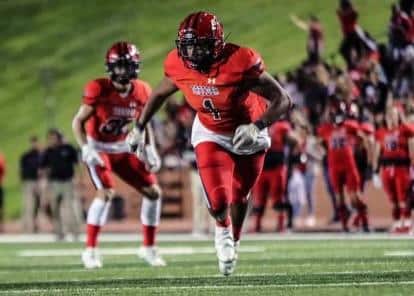 Avion Carter plays with great energy at Amarillo Tascosa High School, and he could feel the energy around TCU football last weekend during his official visit (Photo courtesy of Avion Carter).

Avion Carter possesses a ton of great energy, and he felt that energy was matched, if not eclipsed, from the TCU coaching staff on his official visit this past weekend.

So much so, that as he was walking out from one of his final sit downs with coach Sonny Dykes and staff, Carter took a deep breath  before announcing in that moment:

This sent TCU defensive line coach JaMarkus McFarland into a frenzy, which spilled over into the coaches’ staff meeting the next day. In that meeting, the staff erupted in applause, letting Carter know his commitment pushed them to a current top-15 ranking for the 2023 class with lots of action still on the horizon.

Carter described just knowing that it felt right and took the advice of his high school coach, Ken Plunk, who has been Amarillo Tascosa’s coach for the past 14 years.

“Coach Plunk said when you go on visits, don’t focus on football or if you can, at least not just on football. You need to go where you feel comfortable and you will just know,” Carter said.

Carter certainly knew. He said his visits to Texas Tech, Texas and Oklahoma State all left him wanting more.  He couldn’t exactly put his finger on it, but after being at TCU a couple times, it was the “full experience,” as he referred to it, of an official visit at TCU that left no doubt.

Beyond the TCU campus, Carter fell in love with Fort Worth, calling it an “amazing place.” He said that while the ultimate goal is to continue playing football after college, he sees himself living in Fort Worth well past his college days, whenever the time comes, to settle into the business world.

TCU coaches point not only to Carter’s energy, which they love, but the his maturity.  From my brief interactions with Carter, I feel comfortable echoing the same sentiments.

Carter is already using this maturity and dynamic personality to try and recruit more Frogs. He said that he enjoyed his time with ‘23 defensive back Curley Reed from Lake Charles, La., while trying to get him to commit.  You can also see by his Twitter shoutout to fellow ‘23 defensive lineman, Markis Deal of Garland Naaman Forest, quote-tweeting Deal by saying “come home Dawg,” followed by Frog and purple heart emojis.

In addition, the TCU staff loves how Carter uses his hands and his willingness to line up in different spots in multiple fronts, and are really excited about his 6-foot-3 1/2, 260-pound frame. The plan is for Carter to line up at the 3 technique (interior lineman on the outside shade of the guard) and as a strong 5 tech (outside shade of the offensive tackle) for the Frogs’ new odd/three-man front, as he has done a little in high school.

Carter, who has mostly lined up on the edge for Tascosa, said that he is going to play inside for his senior season as he prepares for what TCU is going to ask of him. Carter feels that his pass rushing abilities are his strong suit, and playing inside will help in his development into being a true run stopper.

Typically, guys who have experience rushing from the edge and moving to the interior defensive line end up having elite quickness for a defensive tackle, and I can see Carter having just that. His ability to not only be multiple, but also having some quickness plays right into Frogs defensive coordinator Joe Gillespie’s attacking defensive style, which will require lots of pre- and post-snap movement from defensive linemen.

For a large-bodied young man who will end up on the interior, Carter demonstrates an ability to “run the hoop,” or what is otherwise known as leaning, bending and taking a tighter path to the quarterback. It’s rare for players his size.  He also displays great hand combat in his pass-rush moves, which will continue to serve him well moving forward.

Carter is a good take for the Frogs from a fit standpoint in all areas, from his infectious energy to his skill set on the field. While he is not exactly sure when he will be back to Fort Worth, he knows one thing for sure.

“I plan on being at a bunch of games,” he said.

Whenever he decides to head back, you can bet the TCU coaching staff will be as fired up as the day he committed.