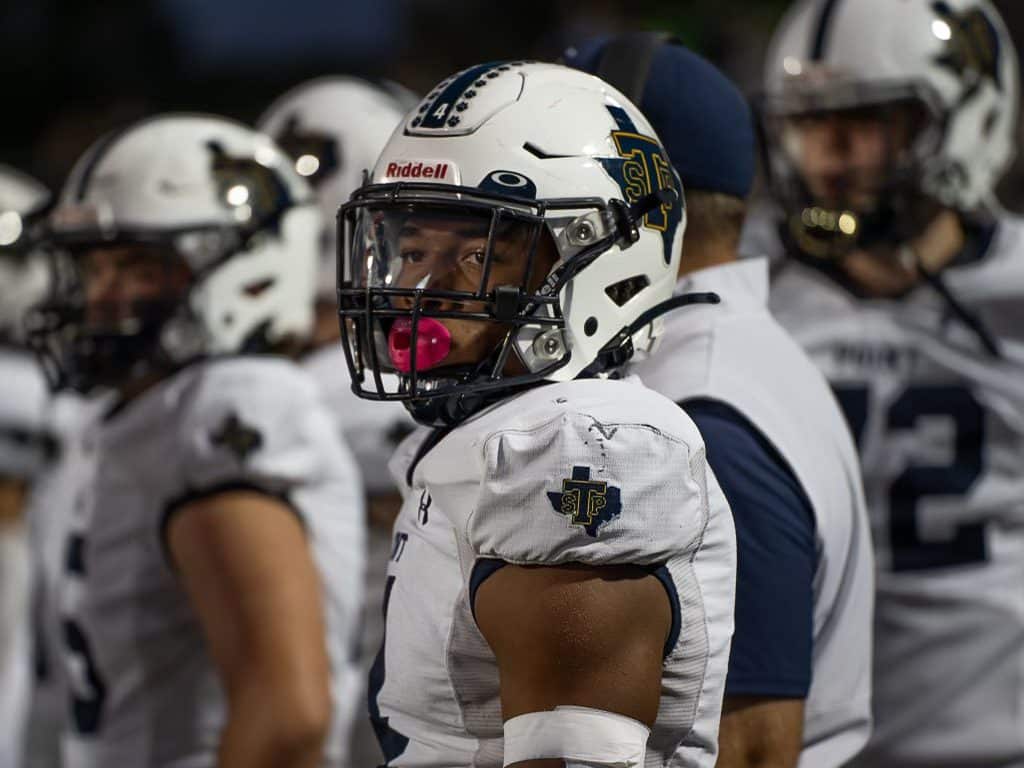 Cameron Cook was born in Fort Worth and has always considered TCU one of his favorite teams (Twitter/Cam Cook).

The TCU football recruiting machine keeps chugging along for the 2023 class.

Four-star running back Cameron Cook is the latest to commit to the Horned Frogs, announcing Tuesday from a large family gathering at a venue hall in Round Rock . This commitment pushes the Frogs back into the top 25 for the 2023 recruiting cycle.

The Stony Point High School star chose TCU over Texas and Cal, which rounded out his top three.

Cook comes from a big family that includes two football-playing brothers. Brinson Sharp is a freshman at McMurry College and starred at Azle High School, just outside of Fort Worth. Younger brother Kaden Cook is also at Stony Point and has the potential to be the top defensive back in Texas for the class of 2025.

I caught up with Cam just after he was picking up his younger brother from football practice, as he often brings him back and forth.

Family is important to Cook, and the relationships he developed and familiarity he has with TCU sealed the deal.

“I built relationships with all of the coaches,” Cook said. “I talked to a coach almost every single day, and not just a position coach but the entire staff and we really connected and it felt like a family.

“I was born in Fort Worth and TCU has always been one of my favorite schools. To grow up loving a school and then have the opportunity to go and play there – that feeling was just something I loved. So I got that call and they offered me, I told my family everything that I worked for … it was just a blessing and a dream come true.”

In addition to getting to know running backs coach Anthony Jones Jr., Cook also developed a rapport with director of recruiting Bryan Carrington, as he was the second person to offer Cook during his time at USC. Cook continued his bond with Carrington when “BC” moved to Fort Worth, a place Cook was obviously already very familiar with.

“My main connection at USC was through ‘BC,’ and it really meant a lot to me that he believed in me from the beginning,” Cook said. “That really meant something.  So, when he went to TCU, I already had that connection with him and it just felt great.”

Knowing what TCU was all about, combined with the prior relationship with Carrington, building a bond with the current staff and getting to know Jones is what made Cook comfortable pulling the trigger.

“Coach Jones is a really good guy,” Cook said. “I talk to him daily, and he really connects with my family. And my family is such a big deal for me, so if you reach out to them and connect, then that means a lot.”

Beyond Cook’s affection for Jones as a person, he also recognized that he put five running backs in the NFL (four via the NFL Draft) between 2019-2021 while at  Memphis.

Much like many younger players, the NFL remains the goal for Cook, but he acknowledged his eagerness to learn the college game and intricacies of his position from  Jones and company.

Either way, Cook brings great size for the position and a unique skill set for a player entering his senior year of high school. He displays great patience and stands out from other top high school running backs.  First and foremost, even though he has elite speed, he does not show what lots of talented and speedy backs do at the prep level, which is simply to try and outrun everyone to the sideline and then turn it up field.

Cook really understands and preys on defenders who over-run the football and don’t track his near hip well. He is able to stick his foot in the ground as soon as the defender is even or just past him as he carries the ball and gets up field. He gets vertical in a hurry.

Beyond this, when plays break down, Cook can reverse fields but is always looking to get up the field. The typical high school running back will cover virtually all 53 ⅓ yards (the width of the field) for a minimal gain.

Typically for high school running backs making the transition to the collegiate game, it is easier to understand the run game and more challenging to master passing responsibilities.  This is particularly true in pass protection and route adjustments.  Conversely, this is something that Cook has proven on film thus far, all while acknowledging he wants to continue to dive into the depths of reading a defense. He shows a great grasp of the pass game, pass protection and screen game, and displays tremendous footwork in the backfield.

Jones’ experience with top-rated running backs will lend itself well to the balancing act of coaching a top talent at his position.  While running the football generally comes more natural for backs, there certainly are coaching points to emphasize, as well as things all running back coaches want to be careful not to “over-coach.”

It is critical for running backs to understand the footwork before getting the ball, in order to not cut off his inside foot when making the key read to get up the field.  When this is botched, you often see ball carriers slip and lose their footing. Proper footwork at the snap allows the running back to properly cut off his outside foot at the point of attack.

While it is rare to have these skills in high school, Frogs fans will see a combination in Cook that makes him smooth, patient and able to get up field quickly while using exceptional vision and a great ability to change of direction — particularly for a good sized running back.

Running backs are inherently able to play early in their college careers. This stems from the aforementioned coaching points, or lack thereof, in the running game.  There is simply a lot of carryover from high school to college football at this position. Combine that with Cook’s talent and already accelerated development, this is a player we could see on the field quite a bit when he arrives for the 2023 season.

In the meantime, TCU will keep all hands on deck to protect this commitment up until signing day, as well as making sure they are all-in on recruiting Kaden Cook.

Be sure to stay connected with FrogsToday.com for continued recruiting news, as we update you on Cam or Kaden. For the Frogs, it’s safe to say they can’t have enough Cooks in the TCU kitchen.

The family atmosphere that has been created and touted by coach Sonny Dykes is really coming to life. A family culture is making headway in the world of recruiting.

All we need to do is ask the latest TCU commit and hope that his younger brother is starting to feel the same way.