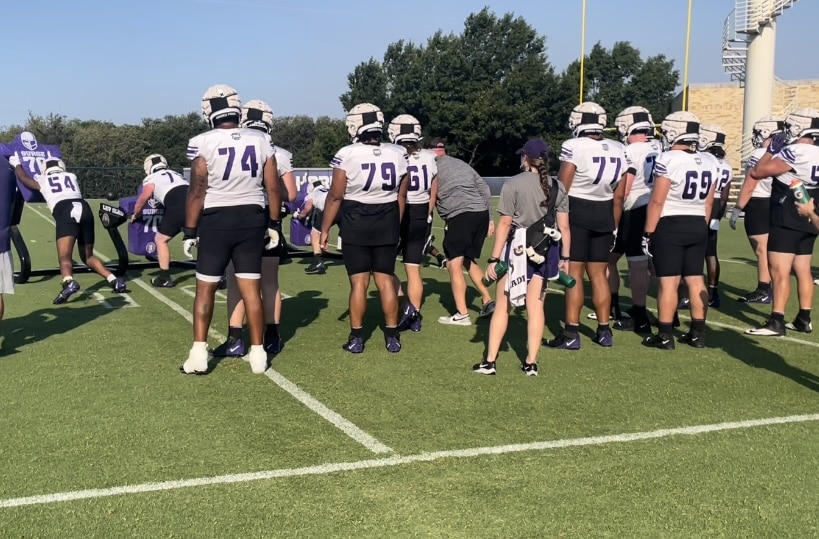 By David BeaudinAugust 3, 2022No Comments

FORT WORTH — There was certainly a sense on Day 2 of TCU fall camp Wednesday that an emphasis was placed on “stealing” as much individual time for the position coaches as possible.

This included extended individual periods early in practice, position groups working, and grabbing individual work whenever the practice allowed for it.

For instance, typically when the offensive skills players compete with the linebackers and defensive backs in 7-on-7 drills, the offensive and defensive lines generally go into one-on-one pass rush against one another. They ultimately got to that Wednesday, but not without taking some valuable individual time for each respective group.

The focus within these individual periods was to work basic fundamentals, and for most groups this involved building the technique foundation from the ground up with lots of footwork.

A common belief among coaches is that teams play the season on the fundamentals and techniques built during training camp.  Of course, you can make some minor tweaks and adjustments during game weeks, and coaches will always find some time to focus on the basics. However, the amount of time poured into opponent preparation and game-planning does not leave a whole lot of room for individual time.

With a heavy day for fundamentals in these “indy” periods (as coaches often refer to it), let’s take a look at the focus for each position group for today.