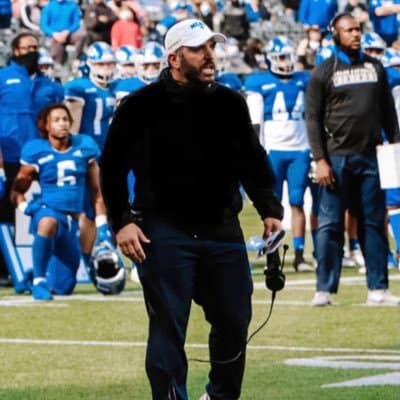 By Jeff WilsonJune 6, 2022No Comments

David Beaudin brings more than 20 years of coaching experience to Frogs Today, where he will be a one-of-a-kind football reporter.

FORT WORTH — Frogs Today is adding a unique wrinkle to its coverage of TCU football that you won’t find at any other outlet.

“David will bring a perspective that no one else covering the Frogs has,” said Brian Estridge, the Voice of the Frogs and the host of the Frogs Today show. “He has lived college football from every angle — assistant college coach and recruiter, high school coach working with recruiters, and football analyst able to break down games for the average fan.

“His X’s and O’s knowledge, coupled with his recruiting insight and intel, is unmatched. He will quickly become every Frog fan’s go-to source when it comes to TCU football.”

Beaudin brings more than two decades’ worth of coaching experience to Frogs Today, where he will take a deep dive into X’s and O’s before and after Frogs games and will also be able to explain how a recruit to coach Sonny Dykes’ program will be able to fit into the offensive or defensive schemes.

His ability to identify on game film what teams are doing will help him produce a wide variety of stories and videos that are unique to the Fort Worth media market. He will contribute regularly to the Frogs Today show as well as write long-form stories that focus on the technical side of the game.

“I’m really excited, not only to surround myself with super-talented people but, on top of that, they’re just a bunch of great human beings,” Beaudin said. “It was so refreshing to be in there and be around people who work hard, who are great people and who are talented.”

Beaudin was the Texas State Coach of the Year in 2020 after leading Nolan Cathoic, located in Fort Worth east of downtown, to a runner-up finish in TAPPS Division I. He coached four U.S. All-Americans, 26 players who received FBS scholarship offers and 64 who were recruited by FCS or Division III colleges.

He has coached both sides of the ball after a playing career as a fullback at Merrimack College in Massachusetts, where he walked on and eventually earned a scholarship and became a team captain. He began his coaching career at his alma mater.

Be sure to follow David Beaudin on Twitter at @CoachBeaudin and look for his work at Frogs Today, where you can get the first month on a new subscription for only $1. Monthly memberships are $9.99 and annual memberships cost $99.

Roxo Media House is a streaming media and production company located in Fort Worth.  From live streaming and video production to podcast and social media broadcasting and promotion, Roxo Media House strives to deliver a media experience clients and fans return to time after time.