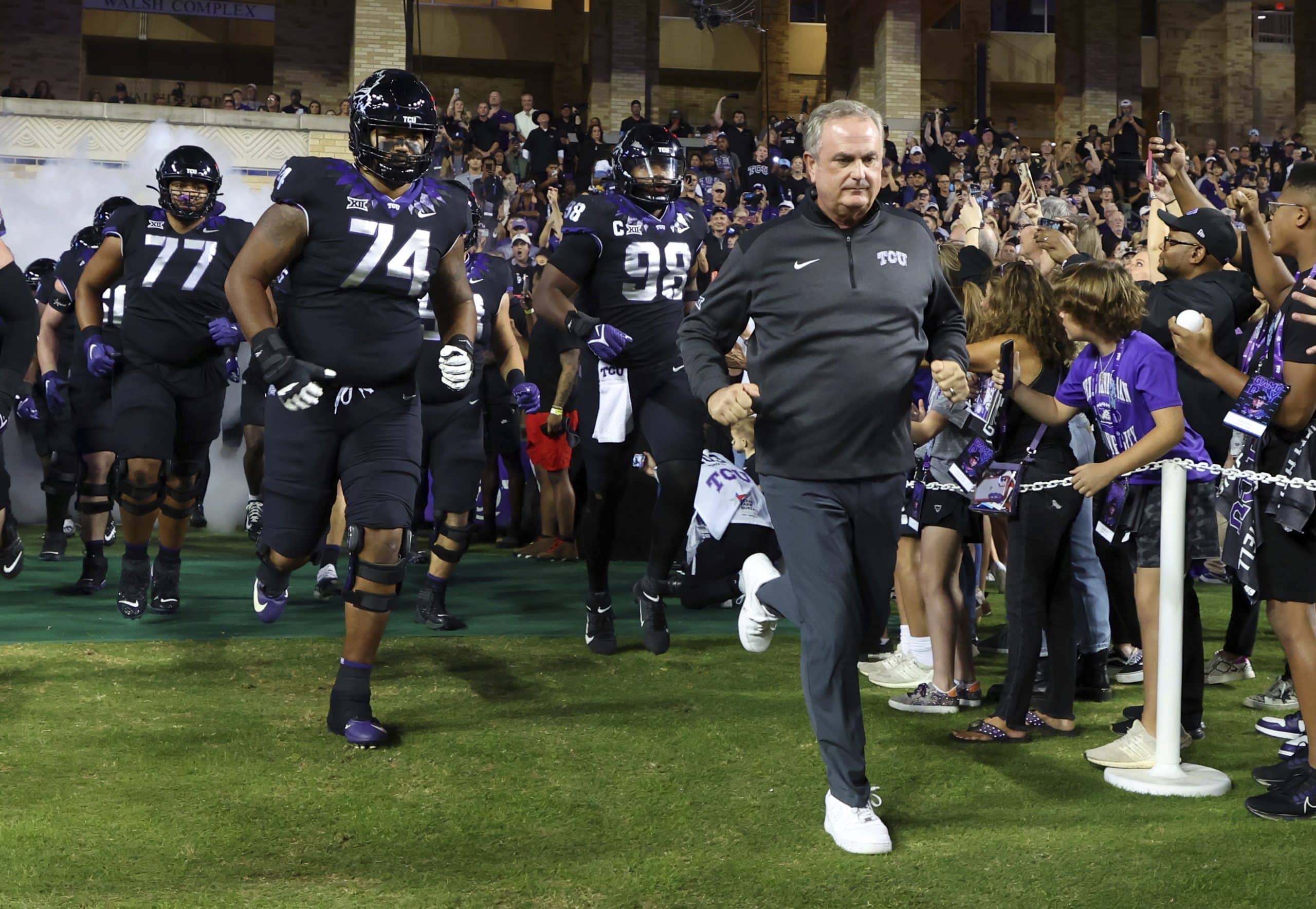 Frogs Today staff predictions: Is a game against reeling, angry Texas Tech a trap for TCU?

By Jeff WilsonNovember 5, 2022No Comments

TCU will take the field against Texas Tech trying to buck the trend of starting slowly (The Associated Press/Richard W. Rodriguez).

The initial College Football Playoff rankings are out, and people around the country are coming to the aid of TCU.

Clemson shouldn’t be ahead of the Horned Frogs, who came in at No. 7. And one-loss Alabama’s case is little dicey, too.

The CFP committee seems to have a brand bias, and right now TCU is off-brand. The head of the committee, Boo Corrigan from off-brand North Carolina State, said that the Frogs haven’t impressed the committee because they’ve fallen behind early.

That alone should fix the Frogs’ slow starts.

And their opponent this morning, Texas Tech, isn’t as good.

The Red Raiders have fire in their bellies from Lubbock being disparaged by TCU recruiting coordinator Bryan Carrington. That truth must hurt.

Texas Tech also had trouble getting to town Friday because of the storms that blew through and had to sit on the plane in Lubbock for a window to safely land.

But this is college football. Anything can happen.

What will happen at Amon G. Carter Stadium? The Frogs Today staff fearless predicts the outcome.

Jeff Wilson: The calendar has turned to November, so don’t blame TCU coach Sonny Dykes if he flinches. Finishing seasons was a problem at SMU, where the Mustangs went only 6-9 in November in Dykes’ four seasons. They were 24-9 in non-November games. Dykes brought up the need to learn how to finish off a season a few weeks ago, so it’s been on his mind. TCU, though, is relatively healthy and has, on paper, already played its most difficult part of the schedule. There’s quality depth. The Frogs are probably more prepared for the stretch run than any previous Dykes team.

They’ve also been made aware that they didn’t deliver their most physical effort last week. There should be a little more fire under their behinds. Speaking of behinds, Texas Tech might be a little butt-hurt from the offseason comments from TCU recruiting coordinator Bryan Carrington. The Red Raiders have bigger problems, like figuring out how to stop Max Duggan, Kendre Miller and Quentin Johnston. No one else has done it this season, and the team that just surrendered 45 points at home isn’t going to do it this week. TCU 41, Texas Tech 27.

Melissa Triebwasser: Sonny Dykes isn’t afraid to address the elephant in the room when it comes to his November record. In fact, it’s he who first brought it up. His team is aware of what outsiders are saying, too, and are carrying the extra motivation of being placed behind a one-loss Alabama team, whose best win was a close loss to Tennessee, in the first College Football Playoff rankings of the season. The Horned Frogs aren’t exactly focused on the postseason yet, and have a lot of football left to play before they can complain about positioning.

Speaking of motivation, neither Texas Tech players, coaches nor fans have forgotten the comments about “building a brand in the desert.” and you can expect plenty of cactus emojis on your timeline Saturday. The Red Raiders would love nothing more than to notch the Frogs’ first loss, and will head to Fort Worth with something to prove. Expect coach Joey McGuire’s boys to deliver their last best shot as they look to break a three-game skid to the rival Frogs, but, ultimately, TCU has too much offensive firepower and the three-headed monster at quarterback for the Red Raiders is more confusing for them than their opponent. I expect Texas Tech to cover a very large spread with a late score, but the victory to be secured by the home team. TCU 38, Texas Tech 31.

Jamie Plunkett: The storylines are plentiful in this one, but like always, it will come down to the game played on the field. TCU is the better football team. The records, eye test, metrics, etc. all back that up. But Texas Tech would love nothing more than to ruin the Frogs’ perfect start, and TCU needs to come ready to play.

Texas Tech lacks an identity on offense, and Red Raiders’ offensive line struggled mightily even against a three-man rush last week against Baylor. If there was ever a time for the Frogs’ defense to have a complete game, this would be it. All three Texas Tech quarterbacks threw interceptions last week, and Bud Clark is looking to extend his pick streak to four games. Meanwhile, Max Duggan and this TCU offense are going to continue rolling against a Tech defense that consistently finds itself out of alignment and exposed. TCU 41, Texas Tech 17.

David Beaudin: The Red Raiders sit at 4-4 and with that it seems the cactus emoji has lost its prick. There was a lot of bitterness heading into the season, as Texas Tech fans tried to create even more of a rift between the two schools over recruiting coordinator Bryan Carrington’s “Lubbock is a desert” tweet in regards to the economy and lack of Name, Image and Likeness opportunities for Red Raiders players.

To further snip at their cactus blossoms, TCU athletic director Jeremiah Donoti announced the “Keep it Purple” ticket plan that seemed to enrage Texas Tech fans more than any other base. The red and black “keyboard warriors” took to social media armed with tortillas and ready for a fight.  Their cacti has not been able to hold any water when trying to compare the trajectory of the two programs.  Despite both teams struggling the past few years, TCU has won the past three meetings fairly convincingly (the first of those three years was a two-point victory on the road) and seven of the past 11 contests.

The school out West boasts a mascot that has “Yosemite Sam” vibes, someone on a horse resembling the “hamburglar,” tortillas abound and cacti galore. Texas Tech plays home games at “Jones AT&T Field.” No, not that one.

The identity crisis the Red Raiders pose off the field matches the one on it. This is an offense that wants to smash you in the mouth, yet they do not have the personnel to do so. Therefore, they will play three quarterbacks who will attempt to sling it all over Amon G. Carter Stadium. Defensively, they will line up in virtually every known formation — yet master none of them. Consequently, they often “void” zones in coverage and don’t always “gap out” the front against the run.

At some point, the slow starts of TCU will bite them.  However, this isn’t the week. The Red Raiders simply cannot match the offensive weapons that the Horned Frogs will throw at them.  The high tempo that Texas Tech runs will be beneficial for TCU, as the more possessions in this matchup favors the Frogs. TCU 42, Texas Tech 21.