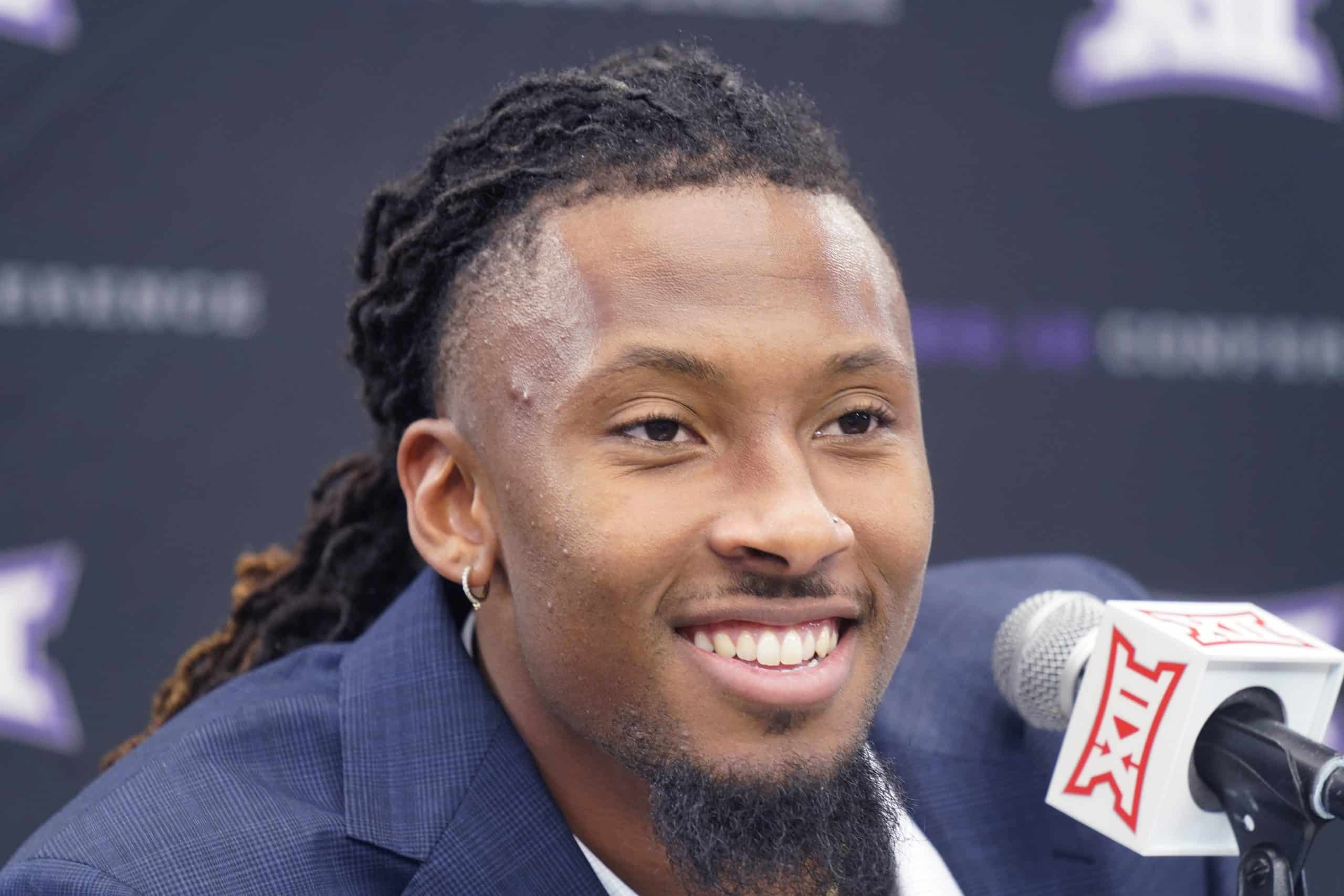 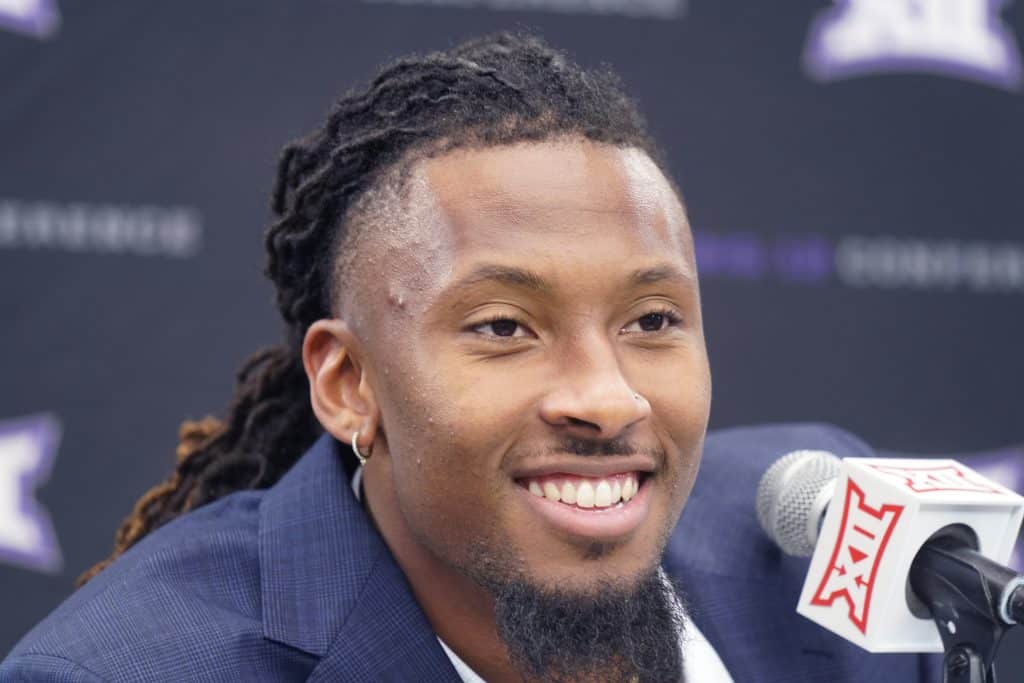 FORT WORTH — The countdown to college football is on.

OK, it’s been on since last season for the most ardent fans, and TCU fans fall into that group as they wait to see what coach Sonny Dykes has in store for the Horned Frogs in his first.

But Big 12 football media days always feel like the start of the countdown clock. Coaches and players even said so.

Frogs Today was all over the meetings, with a three-pronged attack of the Frogs Today show, written content and a heavy social media presence. There’s nothing like it, nor has there been, when it comes to covering TCU sports.

If you’re not subscribed, now is the time.

Even as thorough as we were, we couldn’t get to it all. We have lives, after all, and someone also had to drive down the street to cover the Texas Rangers both days.

So, here are some leftovers and scattershooting in the aftermath of two days at AT&T Stadium:

• The event kicked off with an introduction to new Big 12 commissioner Brett Yormark. Everyone seized on his “we’re open for business” comment, which gives the appearance that he is proactive in getting the best deal for the Big 12 in conference realignment. But there was a lack of substance, perhaps by design to avoid showing what the conference might already have.

He better be holding a good hand that he can improve on the turn, river and flop. Rival conferences are fighting to catch up to the SEC and Big Ten, and it would seem that they would easily poach attractive members from other conferences. Some Big 12 teams, no matter how tightly knit Yormark thinks they are, might want to be poached.

If it’s all about TV dollars, adding a Power 5 team from the Metroplex would seem to make a lot of sense.

• Brent Venables is the new coach at Oklahoma, replacing the jet-setting Lincoln Riley, and Venables sure likes to talk.

He was up Thursday at media days, with his session lasting 20-25 minutes.

He was asked four questions. A few reporters joked that they had set the over/under at 3.5.

Venables can fill up a notebook, which is usually a good thing. Maybe it’s just an in-season thing or a first-time coach thing. Maybe a veteran coach will sit him down and explain that he needs to save his breath to scream at players and officials.

Sonny Dykes ran second in terms of the ability to talk.

He also was very generous with his answers to the kid reporters the Big 12 brought in for media days. In fact, he gave them better answers than he did to the paid professionals.

That’s usually the case when kids are around. Players in all sports understand that kids look up to them, and they will take time (when they have it) to engage with kids. Often, though, fans won’t see it. A lot of it happens behind the scenes, when there are fewer kids and more quality time to interact.

Johnson’s answers were yet another a fine example.

• There’s no question that TCU is flying under the radar, and a lot it has to do with the uncertainty at quarterback.

That was the big topic for Dykes, who confirmed yet again that the job will be won in fall camp.

The front-runners are Max Duggan and Chandler Morris. Sam Jackson is very talented QB who might be getting short-changed here.

Dykes joked that the head coach is usually the last to know who has won the job.

For those who like to read between the lines, it could be Duggan’s job to lose. When a coach says things like “manage the game” and “consistent,” that frequently means the QB who will turn the ball over less will get the nod.

Duggan isn’t perfect, but he knows how to “manage the game” and is more “consistent.”

Of course, as Dennis Miller used to say, I could be wrong.

TCU coach Bill Montigel will have the low amateur at the 150th British Open teeing up again this season for the Frogs.

Filippo Celli, who won the European Amateur Championship last month in Spain, shot 5 under par for the four rounds to top all amateurs and win the coveted Silver Medal. He was honored in the post-tournament ceremony before champion Cam Smith was introduced.

After his round, Celli revealed that he received another big thrill before the tournament by playing the back nine at St. Andrews with his idol, Rory McIlroy. They met Monday putting on the large green for both the fifth and 13th holes, when McIlroy graciously asked if they would mind his company.

“I was so happy when Rory turned to face me and [my caddie] Alberto, and he asked, ‘Hey, guys, you mind if I join you for the back nine?’ I looked at Alberto, I say, ‘He’s serious or not?’ I say, ‘Rory, of course you can.”

Another TCU golfer, Tom Hoge, was also in the field for the first time, but missed the cut.

(Subscribe to our YouTube channel as well as the Rangers Today Baseball Podcast channel. It’s free to do so.)

Catch up on the two Frogs Today shows presented by Railhead Smokehouse here and here.

Brian Estridge is back in the studio this week with some big-name guests. We’re gearing up for daily shows from fall football camp, which starts Aug. 2.

For the baseball crowd, keep an eye on the 2022 MLB Draft on Monday and Tuesday. Multiple Frogs could be selected, beginning Monday with pitchers Austin Krob and Riley Cornelio. They do have some leverage in that they have eligibility remaining.

The Rangers pulled a draft stunner by selecting former Vanderbilt ace Kumar Rocker with the No. 3 overall pick.

Just a casual Karen Carpenter reference: Whatever thoughts you have on Oklahoma State coach Mike Gundy are probably right. He’s a lot of things, not all of them good, but he had the line of the Big 12 football media days and dropped it just so-matter-of-factly.

Asked about Oklahoma State becoming a college football blue blood, as he said was possible after the Cowboys beat Notre Dame in the Fiesta Bowl, Gundy started to make his point by referencing college football’s next shuffle. That’s where the Carpenters, the brother-sister duo from the 1970s and early ’80s, came in.

“Well, we all know, conference realignment, it’s kind of almost the old Karen Carpenter ‘We’ve Only Just Begun’ concept,” Gundy said. “I think it’s just getting started, in my opinion.”

Gundy just kept going with a long answer as if everyone would have said the same thing. He was called out on it by the moderator Ron Thulin.

The song “We’ve Only Just Begun” was the Carpenters’ biggest hit. It was a reference surely lost on the college newspaper reporters, but all the old farts still hanging around got a pretty good chuckle out of it.

Classic country: This feature has taken a couple weeks off, but it’s hard for me to pass up Waylon Jennings and Hank Williams Jr. together. I’m guessing they drank a few bottles of … beer, whiskey, moonshine, whatever after this show was done. Thinking about Hank Sr. might do that, especially to his boy.

Bad golf shots: I actually had a friend do this once. She hit more of a shanky worm burner, but same effect. Enjoy.