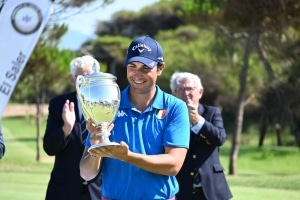 Frogs Today weekly newsletter: No TCU athlete is having a better summer than Filippo Celli

Home » Frogs Today weekly newsletter: No TCU athlete is having a better summer than Filippo Celli

TCU junior Filippo Celli carded a 3-under 69 in the final round to win the European Amateur Championship (European Golf Association).

FORT WORTH — Tom Hoge won’t be the only golfer in the 150th British Open to represent TCU.

Horned Frogs junior Filippo Celli qualified for the golf major next month by winning the European Amateur Championship. The Italian led wire-to-wire in the four-day tournament, shooting a final-round 3-under 69 Saturday to hold off a late charge by Rasmus Neergaard-Petersen of Denmark to win by one stroke.

“I don’t have too many words. I’m just feeling so happy. Really really happy,” Celli said in a news conference in Parador El Saler, Spain. “I’ve been waiting to win a trophy like this all of my life, I don’t have the words to describe my feelings right now.”

Past champions of the European Amateur includes a couple games named Rory McIlroy and Sergio Garcia.

Celli, the 2019 Italian Amateur champion, needed to par the final two holes to secure the victory and did it as Fort Worth golfing icon Ben Hogan would have done — finding each green in regulation and two-putting each time.

Celli’s sophomore season was delayed by COVID-19 restrictions in Italy, where he spent the fall season. He played in five spring tournaments, with a tie for 20th his best finish at the Amer Ari Invitational in February.

He is one of five international golfers on the men’s roster as veteran coach Bill Montigel searches near and far for players, similar to men’s tennis coach David Roditi and men’s track coach Darryl Anderson. They have had successful runs leading their programs and helping to grow TCU internationally.

Hoge, now a Fort Worth resident who came to TCU from North Dakota, won the AT&T Pebble Beach Pro-Am in February to help him secure his first appearance at the Open Championship, which is scheduled for July 14-17 at the famed St. Andrews Old Course.

The summer break has created opportunities for several other TCU athletes to represent their countries or compete at a high level in their sports.

First up is Du Mapaya, who earlier this month finished his stellar career as the NCAA champion in the men’s triple jump in Eugene, Ore. He’ll be back in Eugene to represent Zimbabwe at the World Athletics Championships. His winning jump of 56-feet-7 1/2 inches set the school record and is a personal best.

Women’s soccer star Messiah Bright, the school record holder for goals (39) and points (92), is in Sweden playing for the U.S. U-23 women’s youth national team. The team played India on Saturday in a friendly and will play Sweden on Tuesday.

A newcomer to TCU, Elena Viejo, finished 12th Saturday at the 2022 World Triathlon Sprint & Relay Championships in Montreal. Viejo, from Spain, will be part of the inaugural women’s triathlon team in the fall of 2023.

TCU men’s forward Emanuel Miller, who helped the Frogs reach the second round of the NCAA Tournament, will play for Canada in the inaugural GLOBAL JAM, an event showcasing players from the United States, Canada, Italy and Brazil. Assistant coach Jamie McNeilly will be on the Canada coaching staff.

Frogs Today and Roxo Media House continue to crank out the content each.

If you’re looking for a good laugh, check out the latest episode of the Frogs Today show with Brian Estridge. Former TCU football star Norm Bulaich sits down with Brian and tells a great story about one of his first on-field interactions with legendary quarterback Johnny Unitas.

Among the podcasts also being produced by Roxo Media House is the Rangers Today Baseball Podcast, co-hosted by yours truly. If you like the Rangers and want a good podcast to listen to, that’s the one. Also, subscribe to the Rangers Today website for only $5.99 a month or $60 a year.

All jacked up on Mountain Dew: Eric “Badlands” Booker is a competitive eater and YouTuber who apparently also raps on the side. He’s rather large, so perhaps no one should be surprised that Booker recently set two Guinness world records for chugging.

He downed one liter of tomato sauce in 1 minute, 18 seconds, which makes me want to puke. Booker needed only 6.8 seconds to down a liter of Mountain Dew, which his heart probably doesn’t need.

While Booker appears to be a master chugger, he is ranked as only the No. 23 competitive eater by Major League Eating. I’m sure he’s disappointed with that, as we all are.

Classic country: David Allan Coe might be an acquired taste, but he has a very interesting backstory before he was able to become a star.

He was a jailbird after a series of crimes as a young man in Ohio, and he was even convicted of murdering a fellow inmate despite his claims of self defense. It landed him on death row, but Ohio repealed the death penalty before his number came up. Coe took up the guitar in prison, and his willingness to play music for other inmates eventually convinced the parole board to commute his sentence.

The clip below is not one of his famous songs, like “You Never Even Call Me By My Name” or “Waylon, Willie and Me.” It’s “Tennessee Whiskey,” which George Jones covered a few years later and Chris Stapleton covered and made famous a few years back.

Once again, the styles of ’70s country music are pretty mind-blowing. This was about 14 years after Coe was released from prison, too.

Bad golf shots: I actually saw Hale Irwin hit a very similar shot at a driving range. Of course, his swing looked nothing like this cat’s.