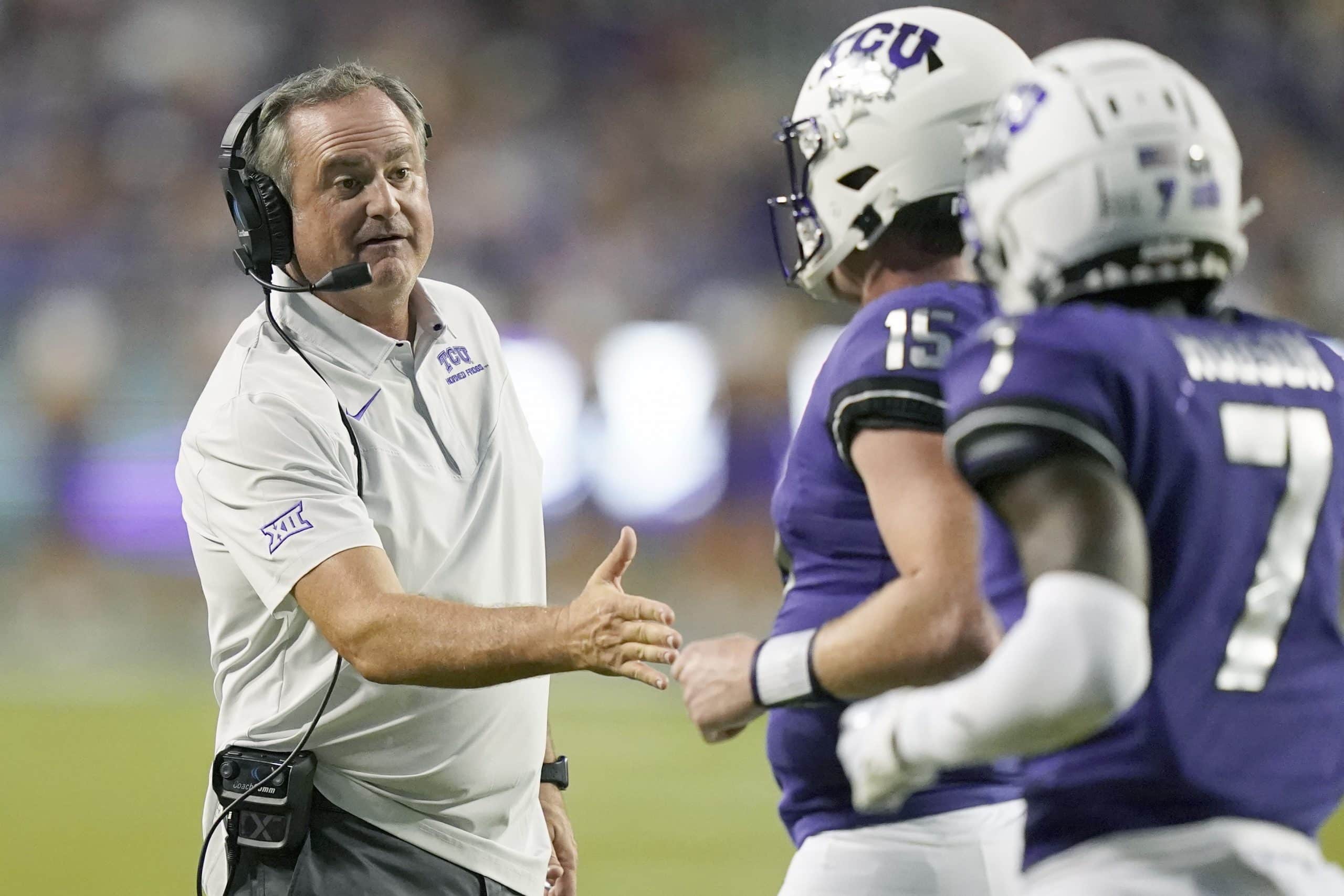 By Jeff WilsonSeptember 19, 2022No Comments 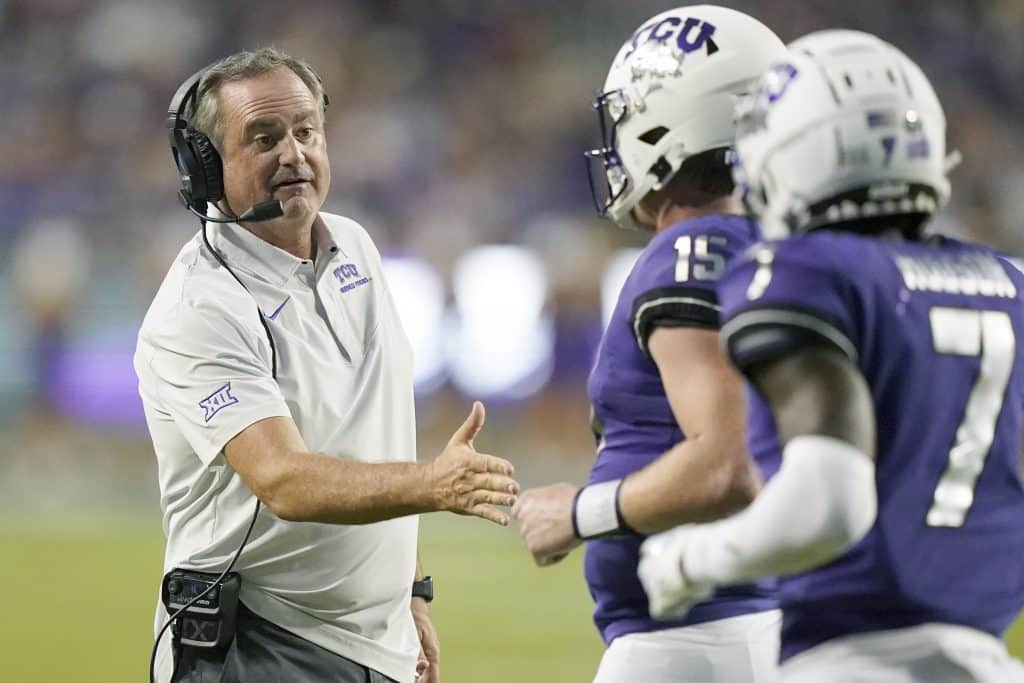 A silver lining to the bye week Sonny Dykes didn’t want is that there were no reporters seeking comment from reporters (The Associated Press/LM Otero).

FORT WORTH — TCU coach Sonny Dykes has said a few times now that Week 3 was too early for a bye week, especially with the Horned Frogs starting to click on offense after two slow quarters to open the season.

But there were some advantages to the bye ahead of the rivalry game Saturday (11 a.m., ESPNU) at SMU.

SMU played. On the road. About 1,200 miles away. At night. And lost. The Mustangs didn’t get healthy, as TCU’s hurting players did, and SMU couldn’t spend any extra time looking at the Frogs. Granted, there’s an inherent familiarity with the TCU offense, seeing that it was what SMU ran under Dykes and coordinator Garrett Riley the past four seasons, but still.

There’s also this: With no game and less media around the Morris Practice Fields, there were fewer opportunities for Frogs players to squawk about SMU and how crappy they think Dallas is.

It’s been quiet ahead of the Battle for the Iron Skillet, which SMU has won the past two seasons. There’s still opportunity for a TCU player to run his mouth, as SMU receiver Rashee Rice did last season, but the sense here is that Dykes has clamped down on the talk.

That’s taking a page out of the Gary Patterson playbook, but that was a pretty good playbook for two decades.

SMU will get some media attention this week. Players will be asked about facing Dykes for the first time since he left SMU for TCU shortly after last season.

Rice is still on the Mustangs roster, and he’s still good, too. After what he offered last season (no one comes to Texas for Fort Worth, or some such), the reporters whose job performance is guided by click bait will be prodding him.

Clicks are good for Frogs Today, too, but the sense here is TCU players will be on their best behavior.

My Saturday night viewing included flipping back and forth between three different ballgames. I eventually moved on from the Rangers at Tampa Bay, in favor of UT-San Antonio at Texas and SMU at Maryland. There was a little Mississippi State at LSU mixed in there, too.

The SMU game ended up being the best of the four, and SMU should not have lost that game but did 34-27.

Maryland tried its very best to hand the game to the Mustangs, including in the third quarter with a series of dumb personal fouls. Marlyand’s defensive backs were flagged many times for pass interference, and SMU ran 96 plays.

But the Terrapins forced three turnovers, including a Tanner Mordecai fumble near the goal line.

The Frogs’ defense would take a similar outcome, though without the personal fouls. The Mustangs have some familiarity with the 3-3-5 defense, which they saw in American Athletic Conference games against TCU coordinator Joe Gillespie while he was at Tulsa.

During Dykes’ four seasons at SMU, the Mustangs lost three times to Tulsa. They weren’t necessarily slowed down, averaging 30.5 points, but they won only once.

The last game Dykes coached at SMU was a home game last season against Tulsa amid heavy rumors that he was about to bolt to TCU.

TCU would take that.

Frogs Today didn’t have a bye week last week. The open Saturday gave us time to catch up on a bunch of stuff that needed to get done, while also allowing us the chance to spread our wings a little bit (some news is coming later this week). In the meantime, here’s our latest content in case you missed it.

From the other sideline: Big 12 talk with Sam Kahn

The big event of the week arrives Saturday in Dallas, but football is one of nine sports in action this week. Not everything is happening locally, but there is plenty to follow. In addition, don’t forget about the Frogs Today weekly lineup of shows.

Appalachian State rolling: What a day Saturday in Boone, N.C., home to one of the best early-season stories in college football.

Appalachian State, fresh off its $1.5 million payday and upset at Texas A&M, hosted ESPN’s College Gameday, and a few in the crowd produced some serious zingers with the signs that make Gameday fun to watch.

The two best are below.

App State beat Texas A&M in College Station, stole the GameDay location from A&M and then showed up with signs to rub it in on national TV.

TAMU taking many L’s to the Mountaineers this week. pic.twitter.com/6fKY4cagG1

Appalachian State was a favorite to beat Troy State that afternoon and did, but needed a miracle to do so.

The Mountaineers stunned Troy with a 53-yard Hail Mary as time expired. The deep heave from quarterback Chase Brice was deflected to receiver Christian Horn, who ran around the gaggle of receivers and defensive backs and into the end zone.

App State graduate Brian Estridge, the Voice of the Frogs, might have fainted.

This morning, College GameDay came to Boone, NC for the first time ever.

Oldie but a goody: For some reason I have control of three Twitter accounts, which is dangerous. But I have set the preferences only for @jeffwilsontxr, so I get to see some interesting tweets on the Frogs Today and Texas Rangers Baseball Podcast accounts (you should follow all three).

The following is one of them. If I remember correctly, this isn’t from a recent tennis tournament. I don’t recall which account’s timeline it was on, but I’m glad it was there. I think I laughed harder the third or fourth time.

This clip will go down in tennis history pic.twitter.com/Bmza9HlQFt

Bad golf shots: Even the pros get a case of the shanks.