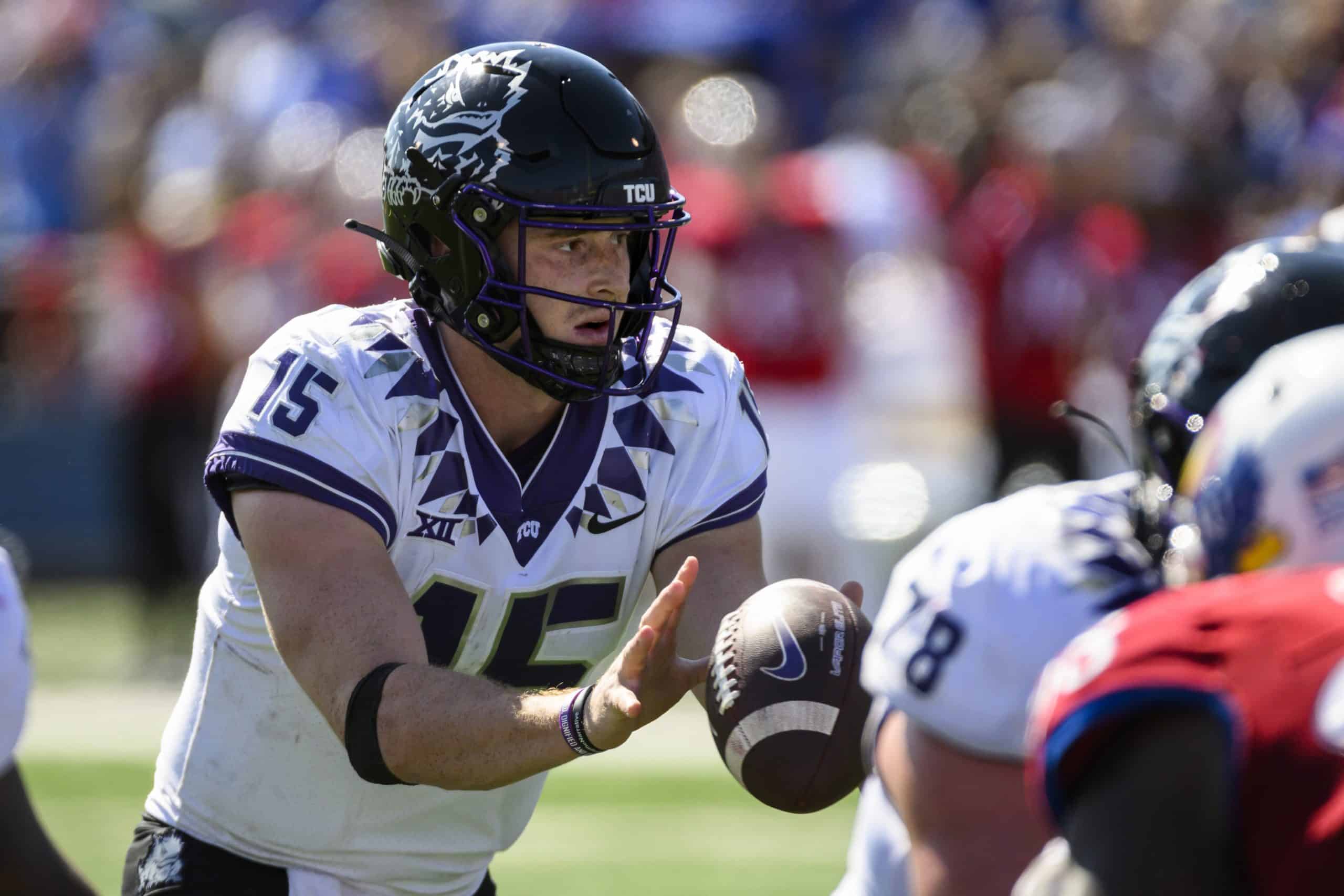 Frogs Today weekly newsletter: Spotlight is back on TCU, but a long road is still ahead

By Jeff WilsonOctober 11, 2022No Comments

Home » Frogs Today weekly newsletter: Spotlight is back on TCU, but a long road is still ahead

Max Duggan has been one of the best players in the country in helping TCU get back on the football map (The Associated Press/Reed Hoffman).

FORT WORTH — This is getting real.

TCU is undefeated, still, at 5-0. The Horned Frogs have climbed to No. 13 in the Associated Press rankings. They don’t have to play at 11 a.m. the next two weeks.

Their quarterback, Max Duggan, is one of the top players in the country through the first six weeks, this after not winning the starting job in fall camp.

And for the second straight week TCU finds itself in one of the few games pitting nationally ranked teams.

Yet, there is a long way to go.

The game Saturday at Amon G. Carter Stadium (2:30 p.m. Saturday) will take TCU only to the halfway point of its season. After facing No. 8 Oklahoma State, the Frogs will play host to No. 17 Kansas State on Oct. 22 in another important Big 12 game. Then comes a trip to West Virginia, then at home against Texas Tech, then on the road at Texas and Baylor before the finale at home against Iowa State.

They’re all going to be important to some degree, based on how the previous week goes.

Whatever happens, TCU is in a better place than it was a year ago. The spotlight is on the program again, and that might be the best development of all.

Yes, it’s still early, but it’s looking as if TCU will play in a bowl game for the first time since 2018.

The Big 12 has eight bowl tie-ins, including two played locally and two more in Texas. If I’m a player and my holiday schedule is going to be altered, I’d at least want a trip outside of Texas. As a writer who craves hotel points and airline miles, I want that, too.

Here are the bowls:

For anyone who still has doubts about how thorough Frogs Today is really going to be simply needs to look back at the past week. We covered a lot of bases, even some baseball. We had a team at Kansas, and no one else is covering the nationally ranked women’s soccer team. Here’s our latest content, in case you missed it.

Hair of the Frog: A new dimension

… because of Max Duggan

How TCU’s offense is so good

Everyone knows one thing that’s happening Saturday, but it’s not the only thing. Also, Frogs Today TV continues to crank out content that TCU fans can’t get anywhere else. Check it out, too.

Swimming and diving: at BYU, Thursday-Friday

These things caught my attention on the internet the past few days. Enjoy.

And you say you can’t work out: The embed speaks for itself. Good for Chris Nikic. Now, get off the couch.

This is Chris Nikic.

He was born with Down syndrome and wasn't able to walk until he was four years old.

He just became the first athlete with Down syndrome to complete the Ironman World Championship.

Love the enthusiasm: Look at this little girl. She takes the corner with in control, zeroes in on the target, narrows her margin for error, and gives it her all.

She doesn’t have very good coaches, though.

My birthday is coming up: For anyone who wants to get me a present for my birthday Nov. 13, this is high on my list. It should be on everyone’s list.

The perfect gift for any child looking to play out exciting bootlegging scenarios. pic.twitter.com/OqBEDg5X4B

Bad golf shots: He’ll be back.