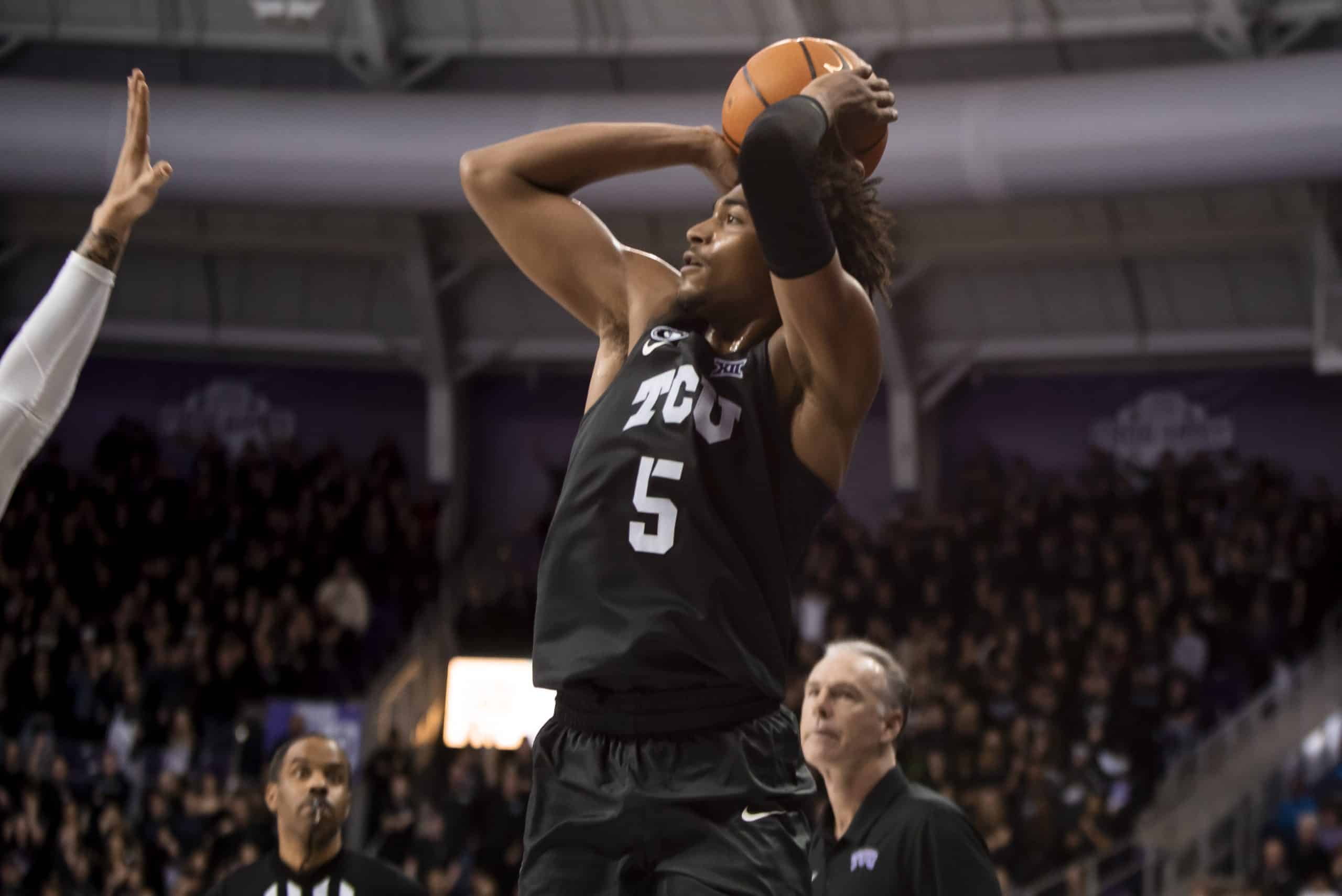 Frogs Today weekly newsletter: To 3 or not to 3? The answer is becoming clearer for TCU men’s basketball.

Home » Frogs Today weekly newsletter: To 3 or not to 3? The answer is becoming clearer for TCU men’s basketball.

Chuck O’Bannon Jr. is TCU’s best 3-point shooter, but he went only 1 for 8 on Saturday (The Associated Press/Emil Lippe).

FORT WORTH — Two numbers stood out Saturday night that spelled doom to TCU men’s coach Jamie Dixon, and he mentioned them multiple times after the Horned Frogs’ 75-63 loss to Kansas State.

The first was five, as in the five layups the Frogs’ defense surrendered in the game’s opening minutes. It was apparent early that TCU would have its hands full with the Wildcats’ four-guard lineup, especially with Mike Miles Jr. out because of wrist soreness.

The other number was 28. That’s how many 3-pointers the Frogs fired up, making only six of them.

“Half of our shots are 3s. That’s not us,” Dixon said. “We had that in the first half, we talked about it, and in the second half it continued. …

“… It’s the total number of times that I think really disrupted our flow in our offense.”

Dixon said that he has implored the Frogs to go inside more, and Farabello and Emanuel Miller both said afterward that the goal each offensive set is to get at least one paint touch.

Though he’s only 6-foot-7, Miller was one of the best post players in the Southeast Conference last season while at Texas A&M. The Frogs might be better served if he played more on the block than on the wing.

The Frogs also get plenty of buckets off penetration, and that’s where Miles was missed most.

The best men’s triple jumper in the country is Chengetayi (Du) Mapaya, and the TCU senior won another indoor meet over the weekend at the New Mexico Collegiate Classic. He did so with the best jump so far this year in the world.

Pedro Pichardo of Portugal won the Olympic gold medal last summer with a jump of 58-11 3/4 feet (17.98 meters). He also picked a pack of pickled peppers.

Mapaya won the NCAA title in 2019 and was the runner-up last season. He was given an exemption into the Tokyo Games, representing his native Zimbabwe, but couldn’t participate because of a hamstring injury.

The Frogs also had the third- and fourth-place finishers in the triple jump in New Mexico. Jaren Holmes leaped 50-3 1/4 feet and Patrick Sylla leaded 48-3 1/4 feet.

Did anyone make it out to Hawaii to see the men’s golf team? The Frogs finished in 14th place at the Amer Ari Invitational after carding a 9-under 855 at the Hapuna Golf Course in Waimea. Filippo Celli, playing for the first time this season, finished 20th individually at 8-under 208. TCU is off this week, but just about every other team has something going.

Week 3 of this reminder has arrived, and we are another week closer to going to paid/premium content and the launch of our Frogs Today streaming TV show starring the Voice of the Frogs, Brian Estridge.

It remains our goal to get more readers on our email list, which is one of the many ways we want to distribute our content. So, if prompted for your email address, please sign up for free.

We are also now a source on Google News if that’s how you find your TCU news.

One more follow is our YouTube  channel, which is where the TV show will reside. Our plans also include more video features and press conferences. Those commercials you’ve been seeing on Twitter and Facebook can also be found there.

Brian Kelly burned: It’s usually not a huge deal when a football recruit flips at the last minute from one program to another, but Danny Lewis Jr. did LSU coach Brian Kelly dirty.

Lewis is the recruit who went viral thanks to a tweet in which he and Kelly were dancing. It’s a beaut that was featured in last week’s newsletter. Well, Lewis went viral again last week on National Signing Day as he spurned Kelly and LSU and shuffled over rival Alabama and coach Nick Saban.

Saban claims that he can dance, too.

Chew on this: This lady’s name is Leah Shutkever. She’s a competitive eater who has a unique gift of being able to swallow large bites of food. Like a whole kiwi or a pickle. I think Joey Chesnutt’s reign as the world’s best competitive eater is safe, but Shutkever’s skill is kind of freaky. Look at what she can do to a plate of hot dogs at the end of the video.

This competitive eater is the queen of no-chew eating 😮👸

Bad golf shot: This could have been a lot worse. At least he’s not wet.