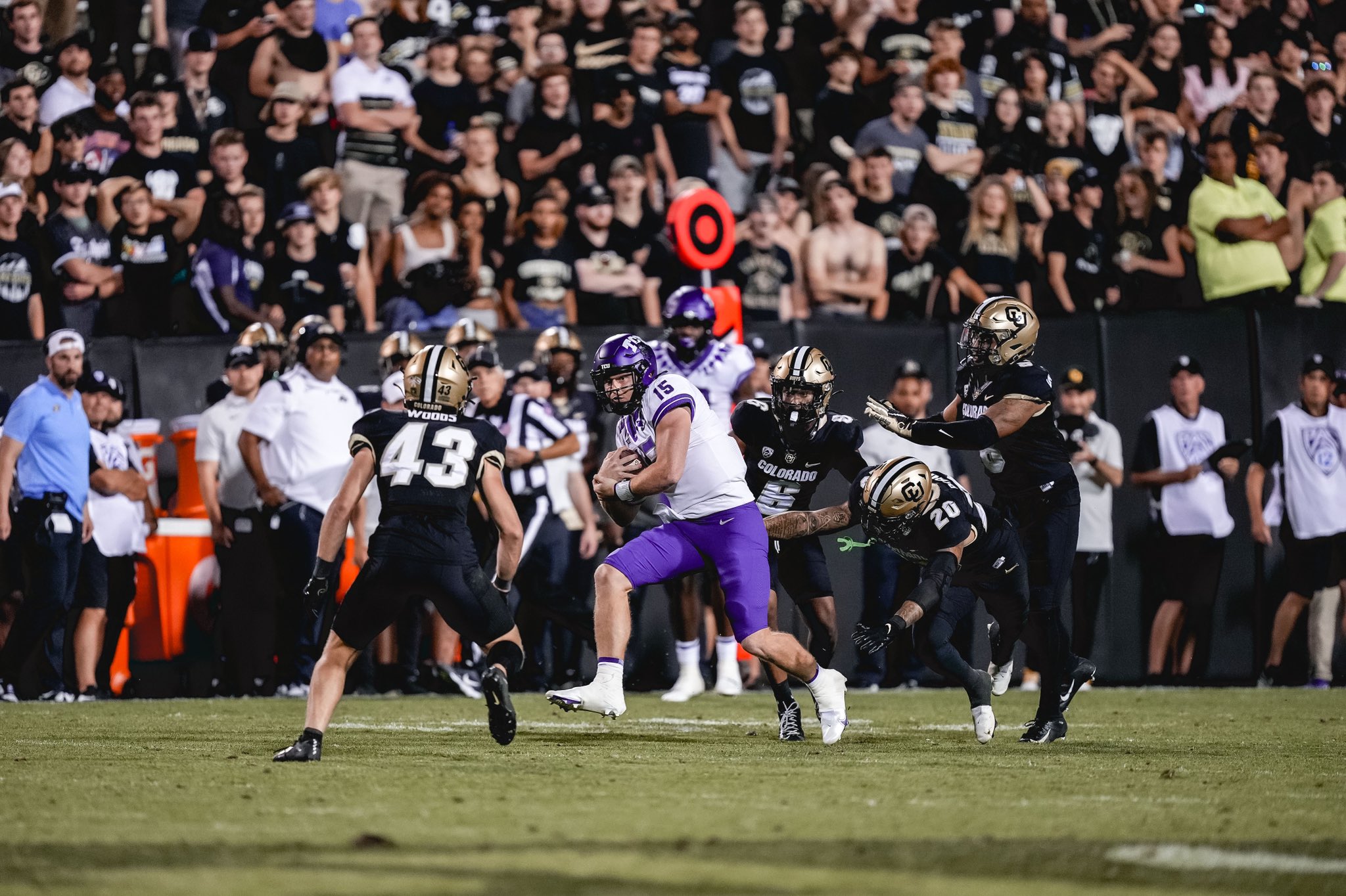 Max Duggan runs for a first down during TCU’s 38-13 win over Colorado (TCU Football).

FORT WORTH — The season started on the right note for TCU, which rolled in the second-half last week to a 38-13 victory at Colorado.

The Frogs Today staff knew it all along, but who knew it best?

David Beaudin picked the Horned Frogs’ point total on the nose, Melissa Triebwasser predicted a special-teams touchdown and Jeff Wilson missed the final spread by a point. Jamie Plunkett? He had the right team winning.

Next up is Week 2 and the home opener against Tarleton State. TCU has been shown as a 37-point favorite over the Texans, and the Frogs Today writers are predicting a TCU cover.

Have we put money on it? Absolutely not.

But we think the Frogs will be 2-0 entering the off week.

Don’t sleep too much on the Texans. They have a team filled with transfers and a veteran coaching staff, so they might make Frogs fans a little uncomfortable at times. But what Tarleton State severely lacks in depth, and with TCU dialed in on the “focus on us” mantra, the Frogs are going to make things tough on the Texans. The offense knows it needs to run the ball, which is right up quarterback Max Duggan’s alley. The Frogs also want to start fast after running only 18 first-half plays last week at Colorado. The defense will do its thing, but don’t be shocked if the Texans haul in a big play or two. But that’s it.

Tarleton State is a fun story because of Kentucky quarterback transfer Beau Allen and big receivers Gabe Douglas and Jaden Smith. But the reality is that this is a game the Frogs will win big. The goal for today: no injuries, get a lot of guys reps and tweak the offense to better suit Max Duggan while Chandler Morris is out. It would be nice to see the Frogs work on the passing game, which was lacking against Colorado, but the window for doing that without looking like they’re running up the score will be small.

After a slow start in Week 1, the TCU offense was humming in the second half regardless of who was taking snaps. That positive momentum continues in the home opener, as Max Duggan and Sam Jackson lead multiple touchdown drives in the first half against Tarleton State. The defense, frustrated by the late touchdown allowed to the Buffaloes, locks down talented quarterback Beau Allen and a solid Texans offense, allowing the Frogs to cruise to an easy victory. The home opener is also our first glimpse of true freshman Josh Hoover, who gets some late snaps. Quentin Johnston will be a priority early, snagging a pair of touchdowns and eclipsing the 100-yard mark. Defensively, after multiple interceptions were called back a week ago, Josh Newton and Dee Winters both haul in picks.

While we are still trying figure out how good this TCU team really is, I don’t think we get any closer to answers after tonight’s game. Tarleton State will present themselves as a formidable opponent to open the game. However, the difference between the starters and Texans players that need to roll through the game in order to stay fresh is stark in comparison. Tarelton State has front-line players that look the part, however the 22 fewer allotted scholarships than the FBS Frogs will rear its head late in the first half. The Texans will pick up a couple scores late because of big-armed quarterback Beau Allen throwing to some really long receivers on the edge.