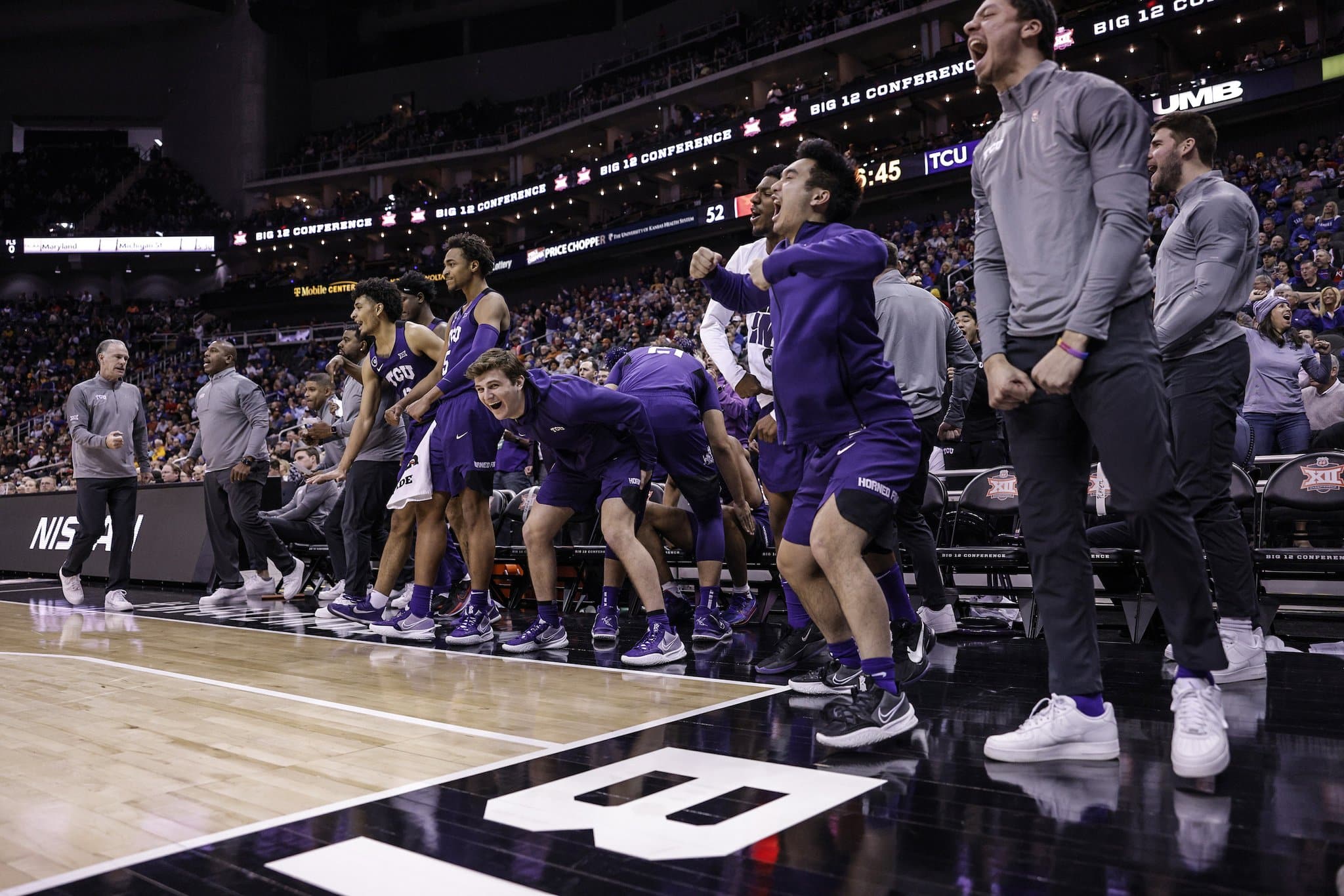 TCU basketball players celebrate during the Frogs’ victory over Texas in the Big 12 tournament (TCU Athletics).

It’s official: TCU basketball is dancing, as the Horned Frogs earned the ninth seed in the South Region against Seton Hall.

The Pirates finished fifth in the Big East this season, notching a 21-10 record. Seton Hall made it the second round of its conference tournament before falling to UConn, and that was good enough to get the Pirates an eight seed.

The Pirates’ resume is solid: six Quad 1 wins, a 9-10 record against Quads 1-2, and a NET ranking of 37. They were ranked as high as No. 15 this season (in the preseason), and won eight of their last 10 conference games after starting 3-6 in Big East play.

Seton Hall is an old team, practically ancient by NCAA standards. Five of their seven leading minutes-getters are graduate transfers, with a senior and sophomore filling out the bunch. Just two players average double-figures in scoring. Senior Jared Rhoden leads the team with 15.9 points per game and grad transfer Bryce Aiken added 14.5 before being ruled out for the remainder of the season due to a concussion. Five other players average at least 7.0 points to round out a very balanced attack.

Rhoden is the Pirates’ best player, and he may remind you of a guy who last took TCU to the Big Dance. Lightly recruited out of high school, the fourth-year player has developed into a star by notching 1,200+ career points and 600+ career rebounds while shooting close to 40% from the field and 34% on 3-pointers. He’s also a strong rebounder (6.8 per game) and has blocked 20 shots. Emanuel Miller and Micah Peavy will likely draw this assignment Friday in San Diego.

Without Aiken, Myles Cale has emerged in the scoring department, hitting double digits in three of his past four games. Sophomore Kadary Richmond can pop for 20 or be held scoreless on any given night, and forward Tray Jackson will be a tough matchup as a 6-foot-10 forward who leads the team in 3-point percentages. He’s also a lights-out free-throw shooter, hitting nearly 87%. Alexis Yetna is a 6-foot-8 forward who pulls down nearly eight rebounds per game and has 80 offensive rebounds.

The Pirates are at their best when the lights are brightest, with wins over then-No. 4 Michigan in Ann Arbor and then- No. 7 Texas in the Big East-Big 12 Battle. They have a ranked win over Xavier and are 3-5 overall against opponents in the AP Top 25.

A 21-point home loss to a barely over .500 St. John’s team is the biggest red flag on their resume.

38: Rebounds both Seton Hall and TCU average per game

0: Times Seton Hall and TCU have played each other in a basketball game