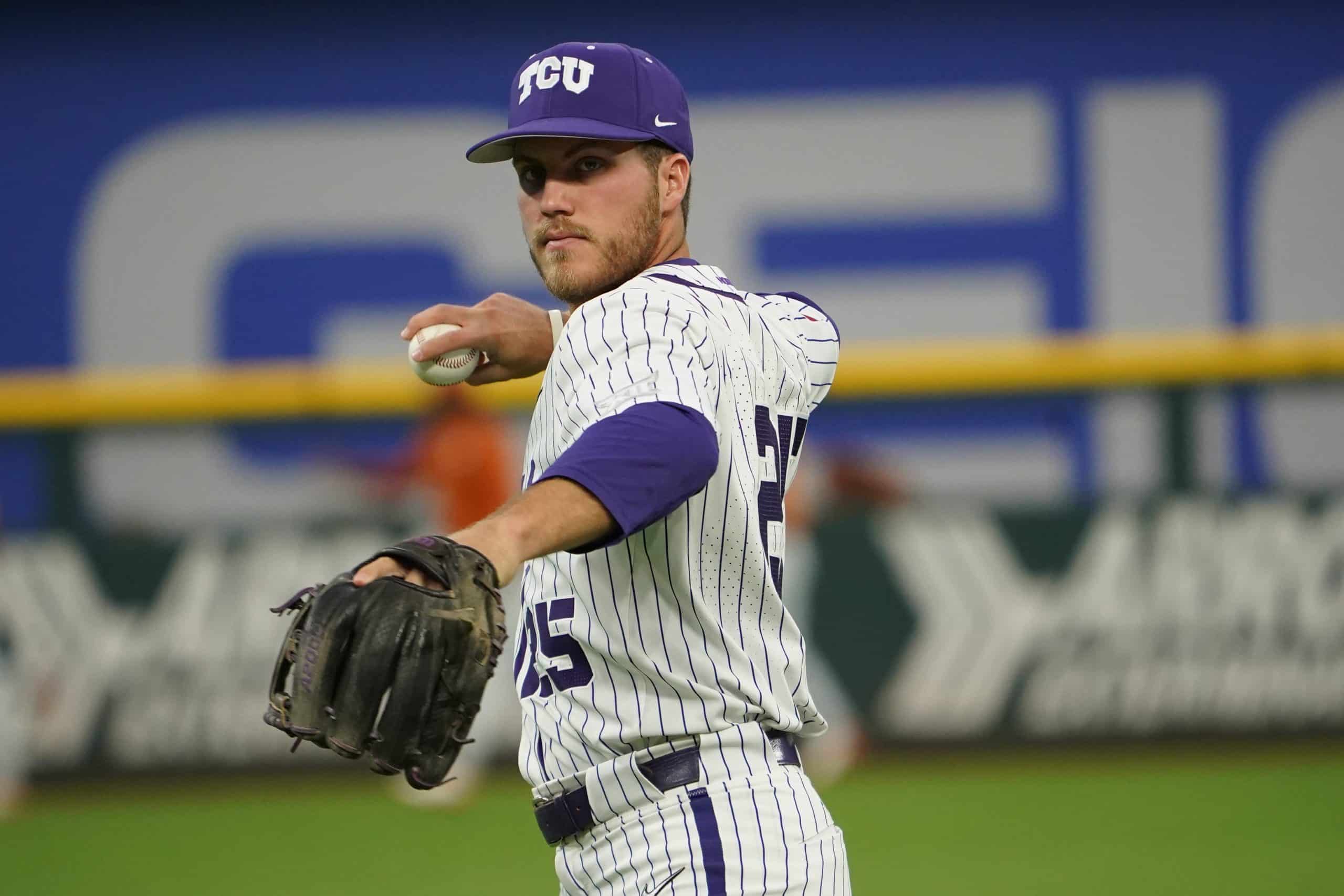 By Jamie PlunkettMay 26, 2022No Comments 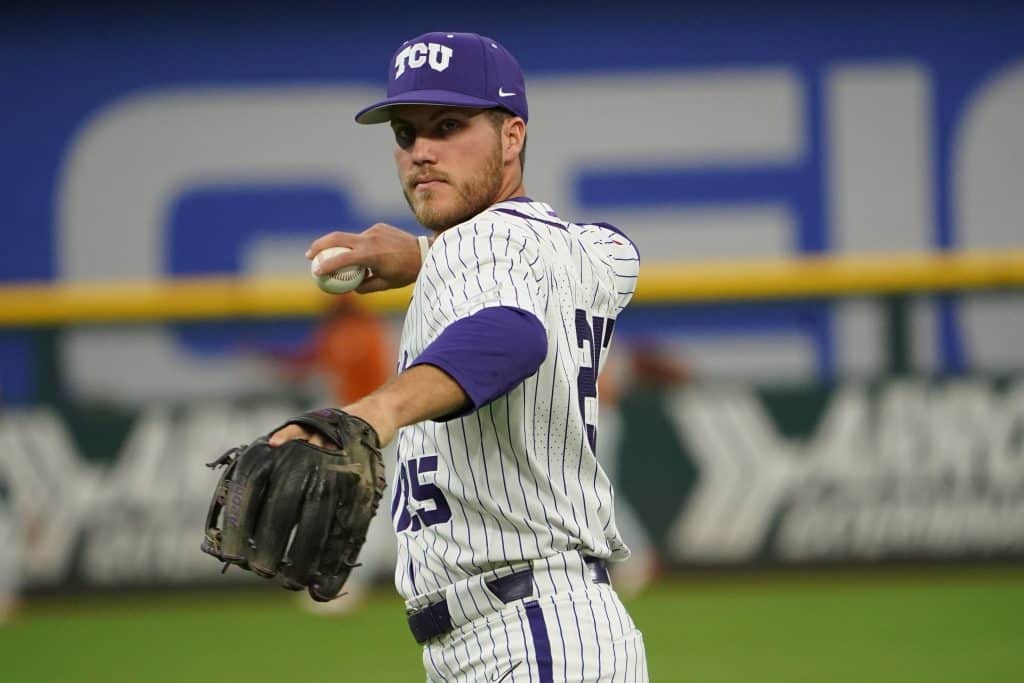 Tommy Sacco and TCU couldn’t get their bats going soon enough in a loss to Texas in the Big 12 Tournament (TCU Baseball).

ARLINGTON — TCU coach Kirk Saarloos was ejected for the third time this season, this time Thursday during TCU’s 5-3 loss to Texas in the Phillips 66 Big 12 Tournament.

The ejection took place in the top of the eighth inning, with TCU trailing 4-2. Texas had runners on the corners Luke Savage was called for a balk, which resulted in a run scoring and the runner on first base advancing to second. With Ivan Melendez at the plate, Saarloos came out of the dugout and motioned to intentionally walk the Longhorns’ most prolific power hitter.

Home-plate umpire Casey Moser interpreted Saarloos’ gesture as attempting to argue with the balk call, and ejected him. Saarloos immediately ran toward Moser to argue, and had to be held back by multiple umpires and associated head coach Bill Mosiello.

Pressure had been building between the TCU coaches and Moser most of the evening, after a shaky strike zone seemed to benefit the Longhorns on multiple occasions.

However, poor umpiring isn’t what prevented the Frogs from winning. TCU mustered just four hits while going 0 for 4 with runners in scoring position, including leaving the bases loaded in the eighth.

Despite the poor performance at the plate, TCU stayed close thanks to Marcelo Perez. The junior from Laredo has been a staple in the rotation since earning his way in to a starting spot midway through the season. Perez pitched seven innings, scattering five hits and striking out six while allowing three runs.

All three runs came in the first, when Perez left a breaking ball up in the zone to Murphy Stehly, who launched it into the left-field stands for a three-run home run.

“I missed my spot on that pitch,” Perez said. “It was supposed to be a slider down and away and I left it down the middle.”

It was arguably the only bad pitch he made all night. From that point forward, Texas only managed two base runners against Perez over his next 6 2/3 innings.

“He’s got good stuff. It’s got some action on it,” Texas coach David Pierce said. “When he has his slider down he’s really tough to hit. I saw him getting ahead in counts and was really consistent with his slider. Great competitor, and he did a great job just keeping us where we were.”

TCU got one run back in the fourth courtesy of a Texas error. Bobby Goodloe hit a high bouncing ball to second base that slipped under Mitchell Daly’s glove, allowing Tommy Sacco to score from third.

The Frogs got another back in the sixth when Brayden Taylor hit a sacrifice fly to centerf ield, scoring Elijah Nunez.

The score remained 3-2 until the top of the eighth, when Savage’s balk2. Moments later Saarloos was ejected, and shortly after that Austin Todd singled up the middle to drive in Texas’ fifth run.

The Frogs threatened to score in the bottom of the inning, loading the bases with two outs, but Goodloe struck out swinging to end the inning.

Gray Rodgers hit his fourth home run of the season with two outs in the ninth, but that was all the scoring TCU could muster.

The Frogs now shift into the loser’s bracket, where they’ll face Oklahoma State in an elimination game at 3:15 p.m. Friday. Saarloos announced that Riley Cornelio will get the start for the Frogs, who aren’t holding anything back in hopes of having a game Saturday.

“We’re excited for Riley. He’s had two good starts since coming back from his injury,” Saarloos said. “So we’re looking forward to him going out and doing the same. No better guy for us to go out and do it.”