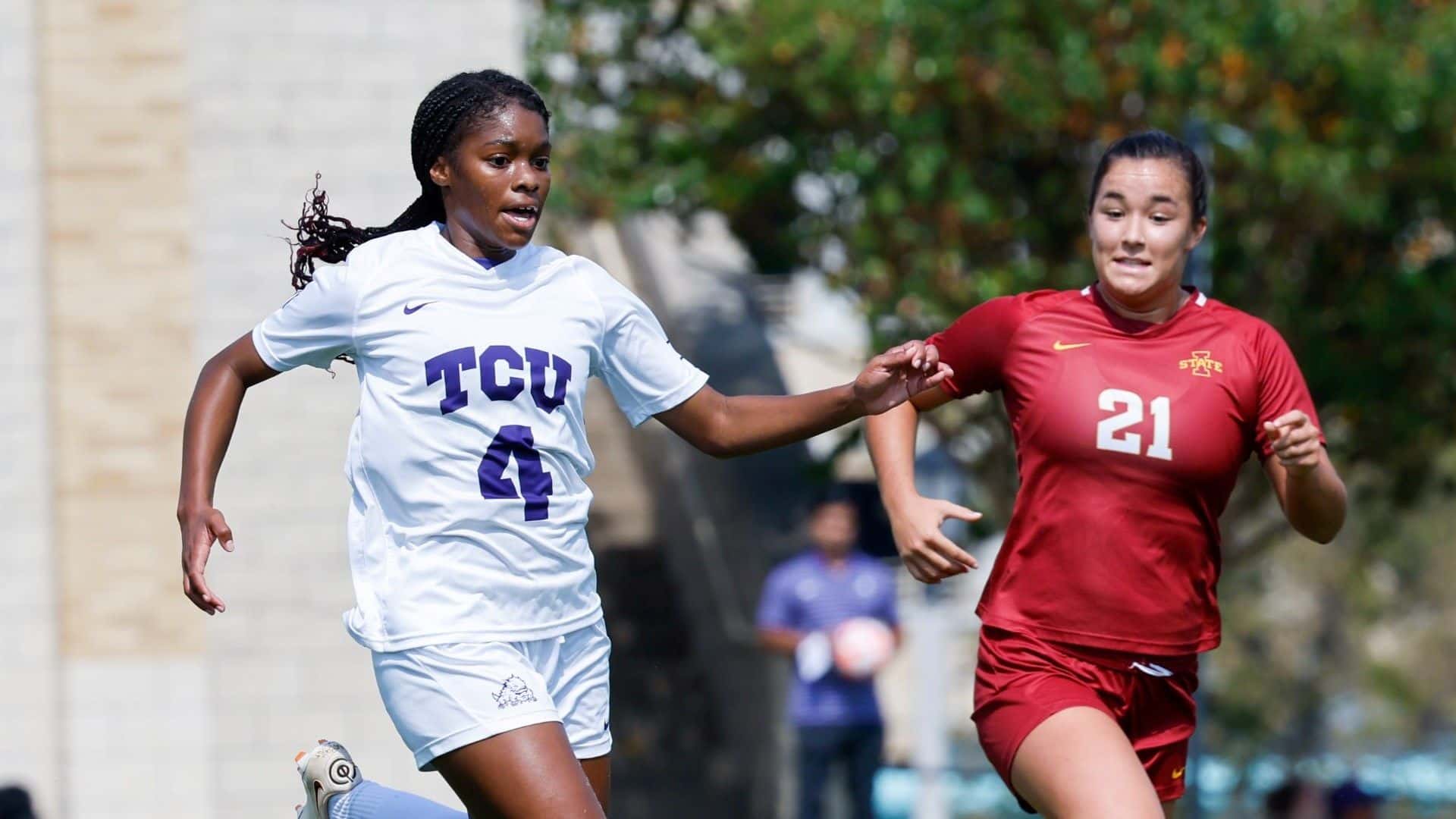 By Ray CartwrightOctober 9, 2022No Comments

TCU had no problems Sunday getting past Iowa State, win8-2-ning 3-0 (TCU Soccer).

FORT WORTH — N0. 10 TCU had a quick turnaround after Thursday’s draw against West Virginia, and that’s just what the Horned Frogs  needed to put that disappointing tie behind them.

TCU cruised to a 3-0 win Sunday afternoon against Iowa State on Senior Day, two of whom scored goals.

It was a dominant performance by the Frogs as they tallied a season-high 32 shots and had a clean sheet defensively in allowing the Cyclones to register only four shots.

“It was a really good performance from beginning to end from our group,” coach Eric Bell said. “We dictated the tempo of the game and controlled it well. We scored some really good goals and kept a clean sheet. Playing a conference game on a Sunday after playing Thursday, especially in the heat, is difficult, and I think it was a good performance.”

The Frogs came out firing, scoring in the 12th minute when Bright was able to corral the rebound off a Brian header and put it in the back of the net for her eighth goal of the season and 47th of her superb career.

Just five minutes later, Brian scored a doozy of a goal that was aided by a stellar pass from Bright. Brian fired off a missile from 18 yards out, finding the top right corner of the goal.

Her fourth goal of the season has No. 10 TCU leading Iowa State 2-0!#GoFrogs | @graciemaria0010 pic.twitter.com/KH3pDliIQj

“I saw Messiah flick it behind and I saw some space, so I kind of took a touch and noticed it was on my left, so I’m just going to shoot it,” Brian said. “I shot it as hard as I could have, looked up, saw it went in and was like, ‘OK, yea!”

Brian narrowly missed notching a second goal in the 61st minute, when she had a nice header on net that was knocked away.

The biggest bright spot for the Frogs this season has been the play from its freshman class. They have grown up fast and stepped into key roles, and contributed again Sunday. Grace Coppinger, who was recently inserted into the starting lineup, scored her first goal of her career in the 71st minute. It was a freshman-to-freshman connection as Coppinger headed home a Tyler Isgrig corner kick.

While the play of the freshmen has stood out, they have a lot to live up to with this senior class. That group helped elevate the program, and Sunday’s game was about honoring the seven seniors.

“They have helped us put TCU soccer on the map in women’s college soccer,” Bell said. “I am indebted to them for what they’ve been able to achieve over the past four years. It’s a wonderful, special group, and they will probably go down in history as one of the best.”

TCU will get a boost to its lineup as senior Skylar Heinrich returns from injury. It comes at a critical time as the Frogs are set to travel to Oklahoma State for a 7 p.m. game Thursday. Both teams are in contention for Big 12 title, and if the Frogs can get three points, it’ll go a long way in securing the three-peat as Big 12 champions.