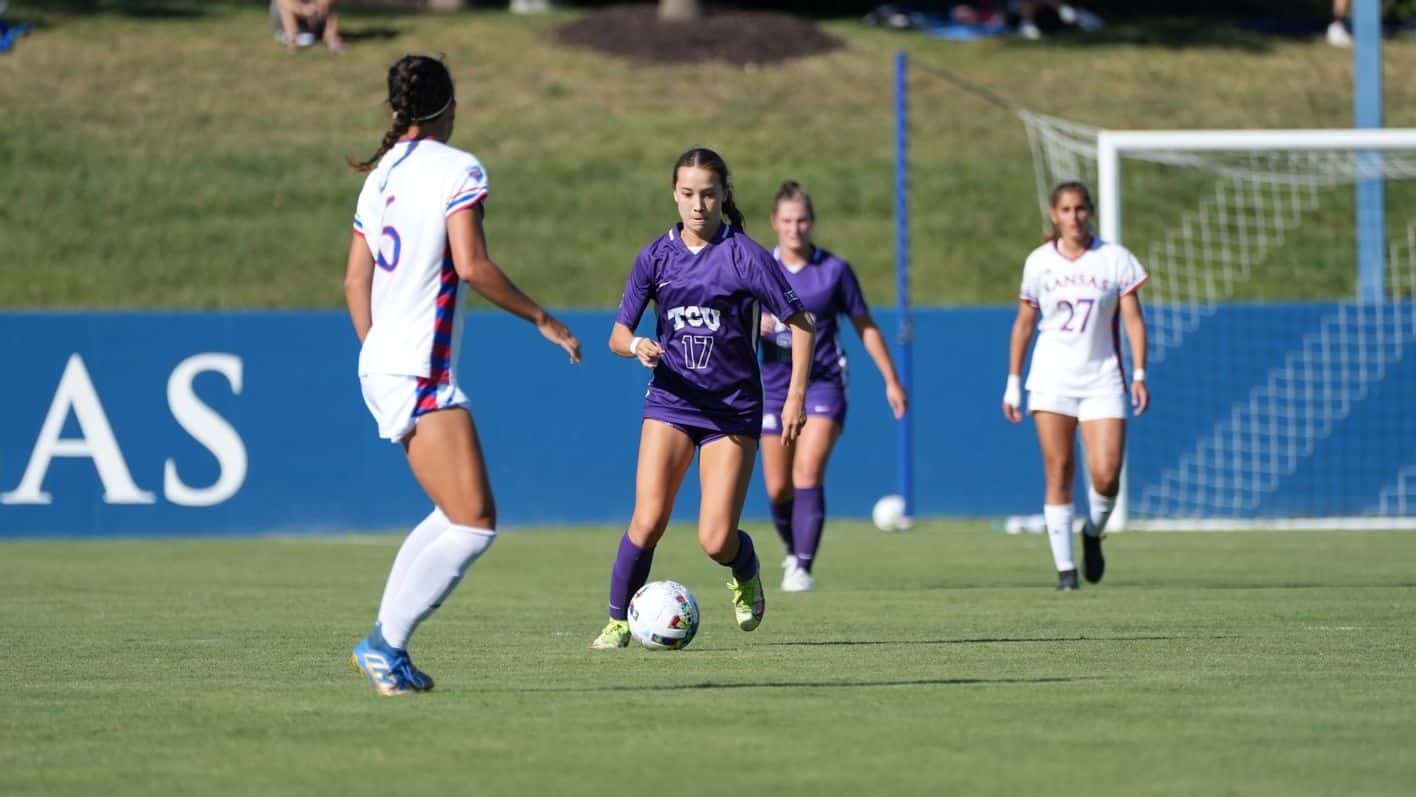 No. 12 TCU earns first conference win with shutout of Kansas

By Ray CartwrightSeptember 26, 2022No Comments

No. 12 TCU picked up its first win in conference play Sunday at Kansas, blanking the Jayhawks 1-0 as senior captain Gracie Brian scored the 10th game-winning goal of her career.

The Horned Frogs ran their unbeaten streak to five games (3-0-2) and improved to 6-2-3 (1-0-1 Big 12) on the season on Brian’s third goal of the season, in the 47th minute. Goalkeeper Lauren Kellett preserved the lead with two big saves in the waning minutes.

After a tough battle Thursday with Texas that ended in a 1-1 draw, TCU had to quickly turn around and travel to Kansas to face a pesky Jayhawks squad. It was understand why TCU might have some tired legs going into the match, but the Frogs fought through that with resiliency and perseverance.

TCU made three changes to its starting lineup to combat the fatigue, inserting Kennedy Clountz, Megan Reilly and Grace Coppinger. These changes allowed the  Frogs to establish pace early and control possession. Though they had trouble in the first half solving the Jayhawks’ defense, they did have several good looks on net, including one in the 25th minute as Chaylyn Hubbard delivered a beautiful cross to a leaping Brian. She narrowly missed heading it in as it went just wide of the net.

The Horned Frogs outshot the Jayhawks seven to one in the first half.

Things quickly opened up for the Frogs in the second half when Camryn Lancaster kicked a cross in that took a fortuitous bounce off the post and found the foot of a charging Brian.

From there it was all about the Frogs’ defense.

Kellett continued her hot play, earning her fifth shutout of the season and 14th of her career. She had only four saves on the day, but every one of them felt important. That included two critcal  saves in the second half.

The first came in the 75th minute, when she dived to deflect a long-range shot. In the 83rd minute, a leaping Kellett used her fingertips to deflect a header over the net.

“She’s super-duper athletic,” Bell said. “She can do a lot of things because of her physical gifts. Hopefully she starts to get into a little bit of a rhythm now. The sky is the limit for her.”

TCU will look to extend its unbeaten streak Friday with another road game in Kansas, this time at Kansas State. The Frogs will do so after a clean game and key performances from two of their best players.

“I thought we played a really good tactical game,” Bell said. “We came out and did the things we were looking to do from an attacking and defensive perspective. We got into a rhythm really fast. It’s hard to win in the conference, especially on the road and I’m happy we could come away with a win.”