TCU faces the feel-good story of the college season. How will Kansas feel after four quarters?

By Jeff WilsonOctober 8, 2022No Comments

Home » TCU faces the feel-good story of the college season. How will Kansas feel after four quarters? 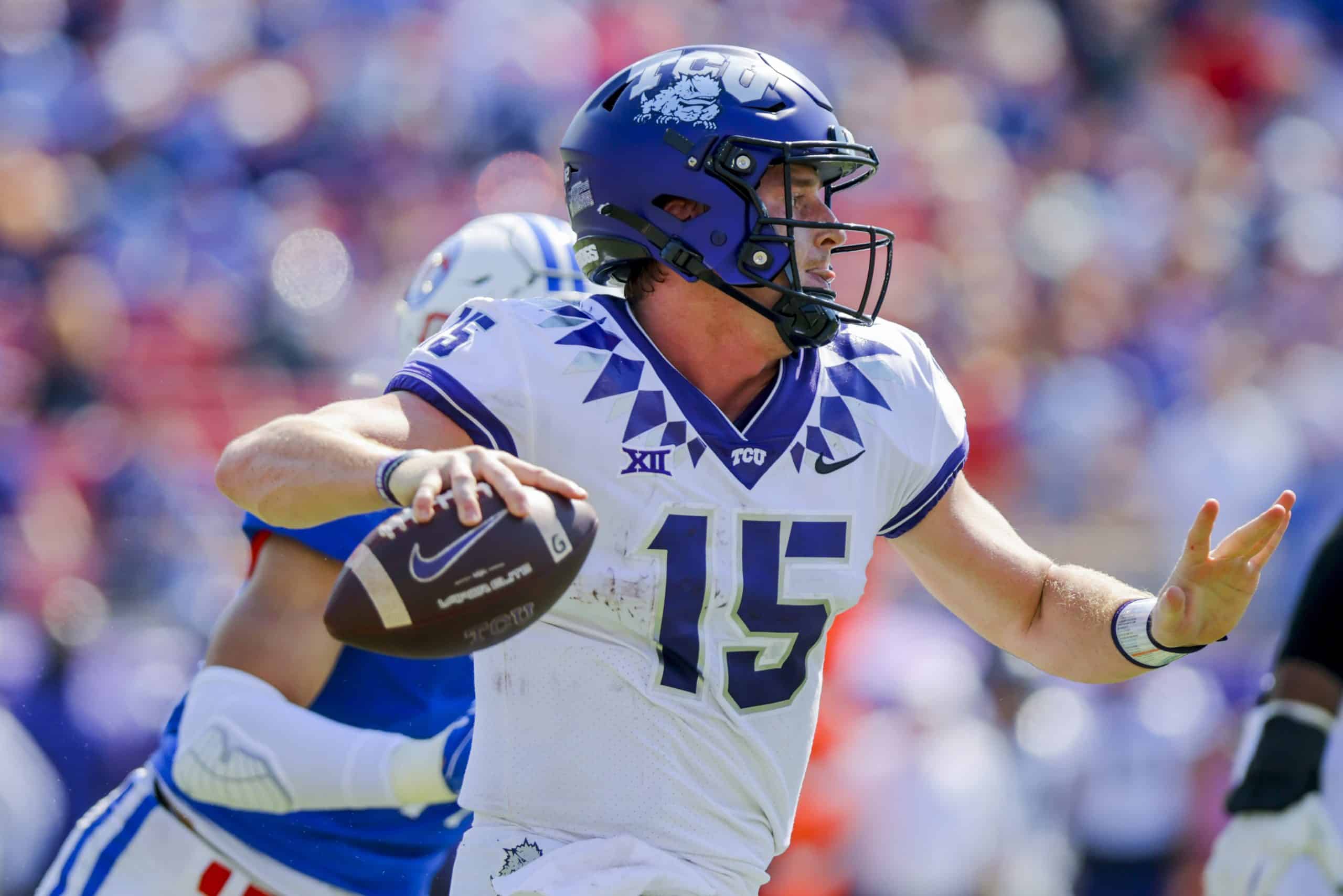 LAWRENCE, Kan. — You know what? Good for Kansas.

The No. 19 Jayhawks are the feel-good story of college football at 5-0 and playing so well that ESPN’s College GameDay couldn’t ignore today’s game against No. 17 TCU.

This college town is buzzing in October, and it has nothing to do with Midnight Madness for men’s basketball. Another sellout is expected at David Booth Kansas Memorial Stadium, and it’s like Kansas fans almost don’t know what to do with themselves.

They better hope this game hasn’t gotten too big for the team.

The Horned Frogs need to make sure they aren’t still beating their chests after their beat down of Oklahoma last week.

Jeff Wilson: No matter how bad Oklahoma might end up being, it isn’t often when a Sooners team gets beat up. TCU was the more physical team in the 55-24 win, overcoming what rated the primary concern for the Frogs entering the game. If they can match that effort up front, Kansas will be in trouble. The Jayhakws have talent, but they don’t have the depth TCU has.

For those who like looking at analytics, TCU would appear to have an advantage against a porous Kansas. True, the Jayhawks only allowed 11 points to Iowa State, but the Cyclones had plenty of success between the 20s. The Frogs have one of the best offenses in the country and several players who can shake loose for a big play.

All that points to a TCU win, but … the haven’t always played well in Lawrence, and don’t discount the effect the crowd could have for Kansas. The Jayhawks should have some extra juice, but they will start leaking if they can’t match the Frogs’ physical play. That might be a tall task. TCU 38, Kansas 27.

Melissa Triebwasser: I’m very conflicted here. Last week, I was the only member of the Frogs Today team to pick against TCU, and we all saw how that worked out. So do I let superstition reign or go with my gut instinct?

The environment in Lawrence will certainly favor the home team. Kansas is not only 5-0 and hosting the signature show of College Football, ESPN’s College GameDay, but the Jayhawks on Friday announced that major stadium and facilities renovation are planned for 2023. To put it simply, Kansas football: so hot right now. But being the darling of the sport isn’t enough to combat a potent TCU offense. The Jayhawks will have to play better — especially on defensive — than they have so far this season. The Horned Frogs have rare team speed and know how to use it, and there is certainly an athletic advantage among the boys in purple, nearly across the board.

When asked to give a prediction this week, I’ve tended to go Kansas by a field goal. For the sake of consistency, I’ll do so here (superstition won). Kansas 38, TCU 35.

David Beaudin:  Much like most predictions I make, or any real-life decisions of this magnitude, I am conflicted. While I am in no way at odds on the final outcome, a solid case can be made either way for how much scoring occurs for both squads. Despite having some high-scoring affairs thus far, Iowa State notwithstanding, the Jayhawks are actually built for shortening games.

Offensively, they have a sensational scheme and can run the ball out of a multitude of offensive sets and personnel groupings. They also operate out of the huddle and can choose to run the clock down at any point getting to the line or let the play clock get low and sprint the to line of scrimmage. Either way, they have ability to keep the Horned Frogs offense on the sideline.

Defensively, the Jayhawks tend to play things safe, and their objective is to keep everything in front of them and force the offense to continue to snap the football repeatedly. Star safety Kenny Logan is a force, and while super aggressive, I would look for TCU to use that aggression against him with some play-action shots down the field.

All of this and hence the conflict. If TCU connects on some of those big shots, it could be really high-scoring and almost Oklahoma-esque. If not, it will be lower scoring than what both teams are averaging this season. The Horned Frogs will connect on a couple of those big plays in front of a tough crowd. TCU 34, Kansas 17.

Jamie Plunkett: The question we really have to ask ourselves is, how much did we learn about TCU from the Oklahoma game? A lot of folks have said that we didn’t learn much because of how poorly Oklahoma’s defense played. My line of thinking is different. TCU’s offense made Oklahoma play poorly. Kansas, as Beaudin says above, tries to play safe defensively. But if you watched Facing the Frogs this week, you know as well as us that there are going to be big-play opportunities.

Max Duggan continues his meteoric rise, the Frogs’ defense continues to fine tune their ball-hawking ways, and the Frogs roll to 5-0 with ease. TCU 55, Kansas 14.