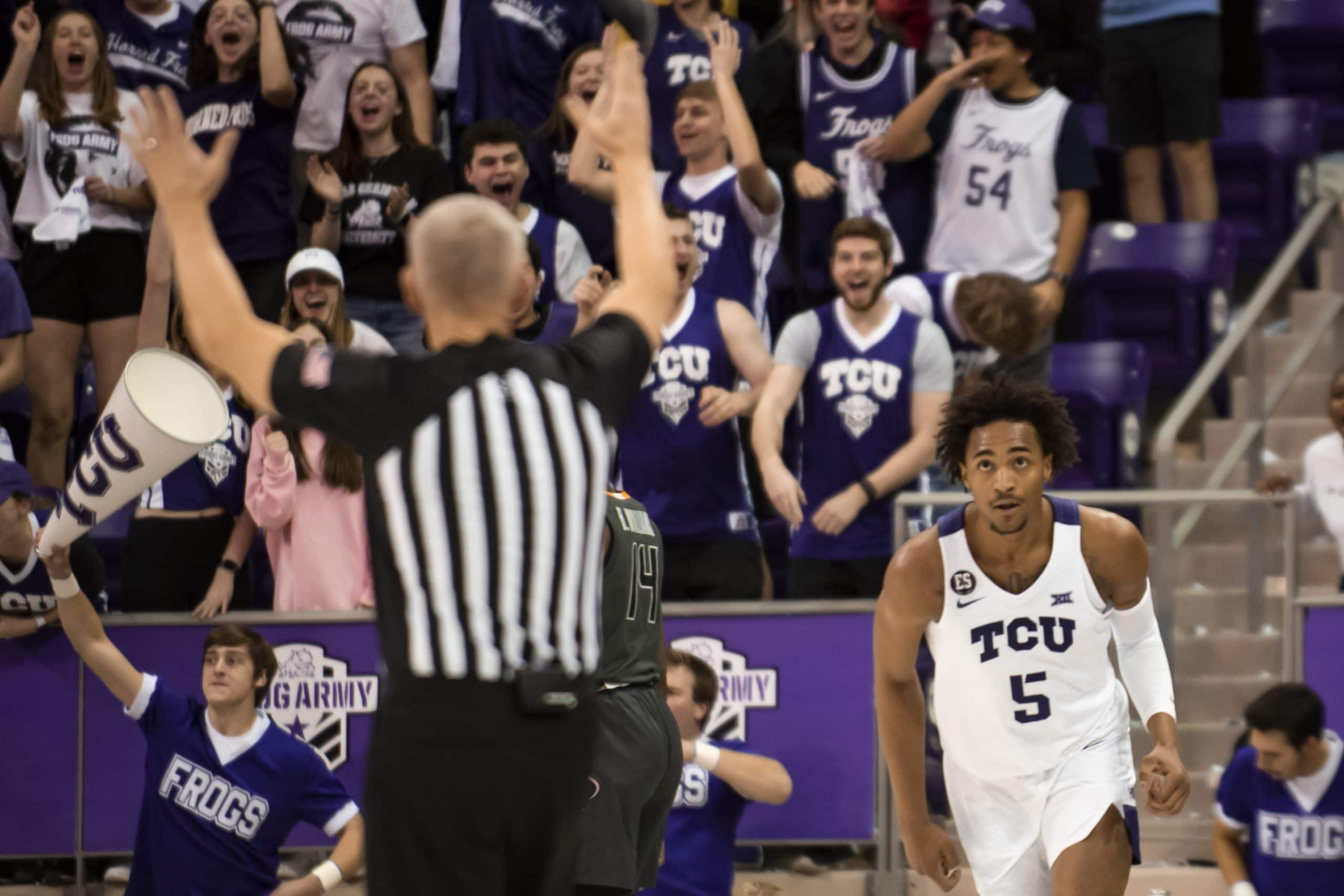 TCU men needed someone to make plays down the stretch. Three did in a win over Oklahoma State.

Home » TCU men needed someone to make plays down the stretch. Three did in a win over Oklahoma State.

Chuck O’Bannon Jr. scored 12 of his game-high 19 points in the second half as TCU beat Oklahoma State 77-73 (The Associated Press/Emil Lippe).

FORT WORTH — TCU had been better, at times much better, Tuesday night against Oklahoma State than they had been only two days earlier against Kansas State.

They had had more time to wrap their minds around Mike Miles Jr. not playing again.

Yet, with 2:04 remaining and a 12-point lead down to one, the Horned Frogs needed someone, anyone, to make a play.

Damion Baugh provided that with a one-handed jumper from the free-throw line.

And, then inside of 30 seconds, they needed a rebound and at least one free throw.

They could expect the rebound that Eddie Lampkin Jr. gave them, but a free throw? Two of them?

Lampkin delivered from the stripe with 19.1 seconds to go, and Baugh found Emanuel Miller on a full-court pass for a slam dunk as the TCU men escaped Schollmaier Arena with a 77-73 victory they had to have.

The win moves TCU to 16-5, 5-4 in Big 12 play ahead of a trip to No. 9 Texas Tech on Saturday and gives them a better chance at securing nine conference victories that should be good enough for the NCAA Tournament.

“We’re reinventing ourselves once again, but we did it and we did what we wanted to do,” coach Jamie Dixon said. “I thought we had some great performances.”

Chuck O’Bannon Jr. scored a team-high 19 points to lead four players in double figures — Miller (16), Baugh (15) and Lampkin (10). Baugh had eight assists, and Lampkin grabbed a game-high 12 rebounds as TCU finished with a 37-24 advantage on the glass.

None was bigger than the one he grabbed with 19.1 seconds to go and TCU up 73-71 following a missed free throw by Avery Anderson III.

Lampkin was fouled and took his 55.6% free-throw percentage to the line with the game on the line. Even Baugh admitted that he thought Lampkin would make only 1 of 2.

“I wasn’t even worried about it,” Lampkin said.

Anderson responded with a quick layup to again make it a two-point game at 75-73. The Cowboys called a quick timeout to set up a full-court press, but Baugh beat it with a bomb to Miller.

“It’s a play we run every day in practice,” Baugh said. “The ref was taking too long [to give me the ball], so I made a side adjustment to E-Man. Once I did it, E-Man knew to go long.”

He made only 1 of 8 3-point tries Saturday against Kansas State, and was playing after being sick Monday.

Miles took part in the postgame news conference, clearly relieved that the Frogs had won without him. He hopes to play Saturday in Lubbock.

“I had to come in and say I’m proud of them,” Miles said. “They were hearing everything that they couldn’t win without me, and I’m just proud of how they played tonight.”