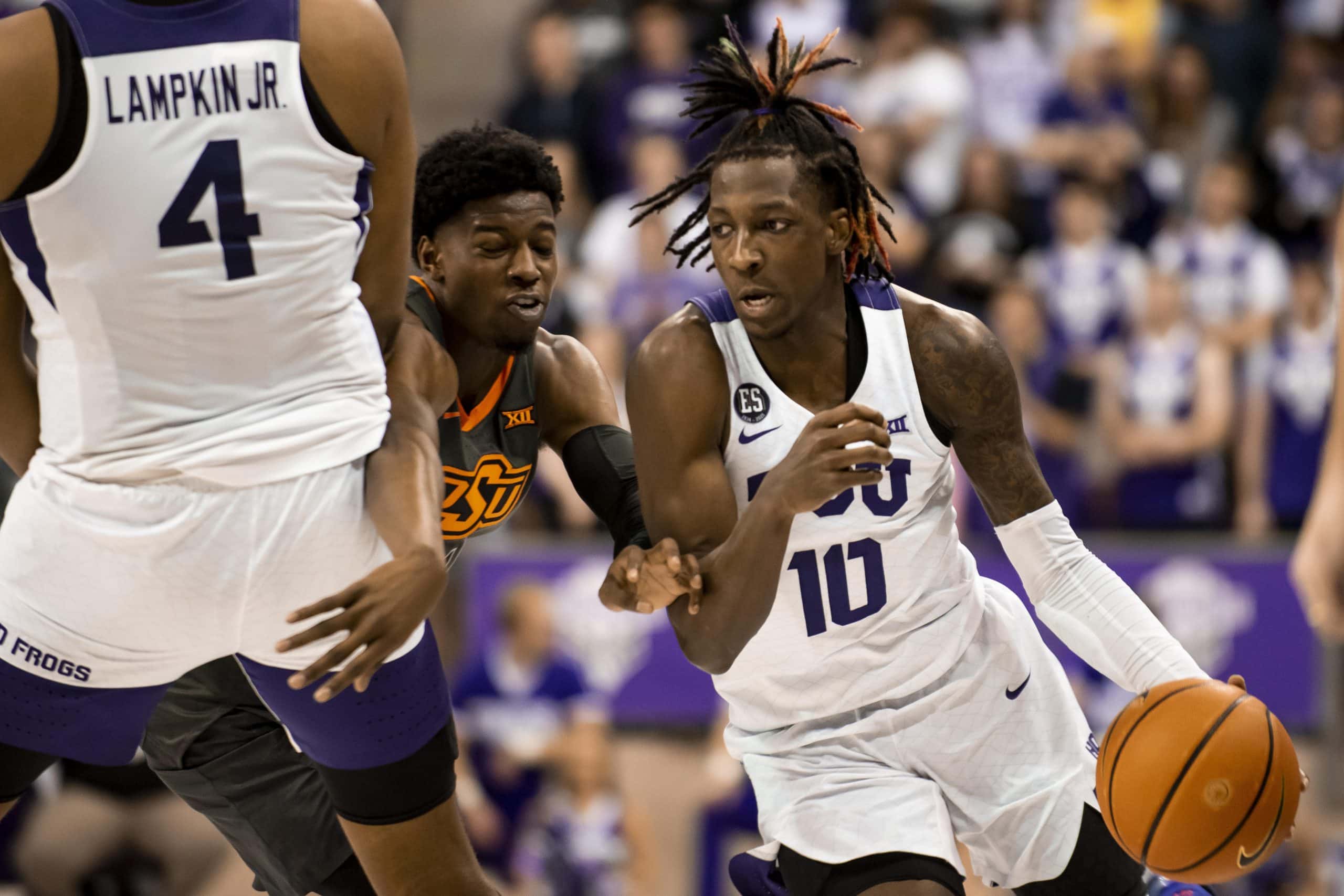 TCU guard Damion Baugh has become an offensive threat for TCU, a trend that started last month in a win at Iowa State (The Associated Press/Emil Lippe).

FORT WORTH — TCU’s coaches have believed as far back as his prep days that Damion Baugh was capable of scoring.

He didn’t look to score, though. He distributed and did the other things his team needed him to do.

That has changed over the past three weeks.

Baugh has been a steady scorer since breaking out for a career-high 23 points with seven steals Jan. 22 at then-No. 15 Iowa State. The Horned Frogs and Cyclones play again Tuesday night.

He scored only five the next time out but has been in double figures the past five games, good for an average of 16 points per game.

“We’ve got a few things we’ve got to keep working on and get a little bit better as far as take care of the basketball,” TCU coach Jamie Dixon said two weeks ago. “But he’s a great defender. He’s a willing passer. He moves well without the basketball.”

Baugh’s season average has climbed to 10.9 points, which leads all eight Horned Frogs newcomers. Mike Miles Jr. remains TCU’s leading scorer at 15.4 points per game, and he scored 16 on Saturday after missing two games with a wrist injury.

But Baugh has given the Frogs another scoring threat.

About Iowa State: The Cyclones are coming off a 75-69 overtime loss Saturday to Kansas State, their fourth straight defeat. … Iowa State started the season 13-0 in non-conference play and climbed into the top 10 in the Associated Press poll. … Izaiah Brockington, a transfer from Penn State, remains the Cyclones’ leading scorer at 17 points a game (fourth in Big 12). … A miserable shooting game contributed to the Cyclones’ 59-44 loss last month to TCU. They made only 3 of 26 3-point tries (11.5%) and shot just 30.9% overall. … Iowa State is only 1-5 so far in Big 12 road games.

About TCU: The Frogs are coming off an 82-69 loss Saturday to Texas Tech, a game they led by 13 in the first half. Turnovers were a major problem. The Frogs committed 20 of them, which led to 26 points. … The Frogs’ defense has taken a hit the past three games after allowing 75, 73 and 82 points. Their adjusted defensive efficiency rating (93.6) has slid to 31st in the country according to KenPom rankings, but that is the best by a TCU team since 1996-97. … The all-time series with Iowa State is tied, 13-13, but TCU has won seven of the past eight games and five straight in Fort Worth. In the first matchup this season, the then-No. 15 Cyclones became the highest-ranked opponent TCU has beaten on the road in program history.