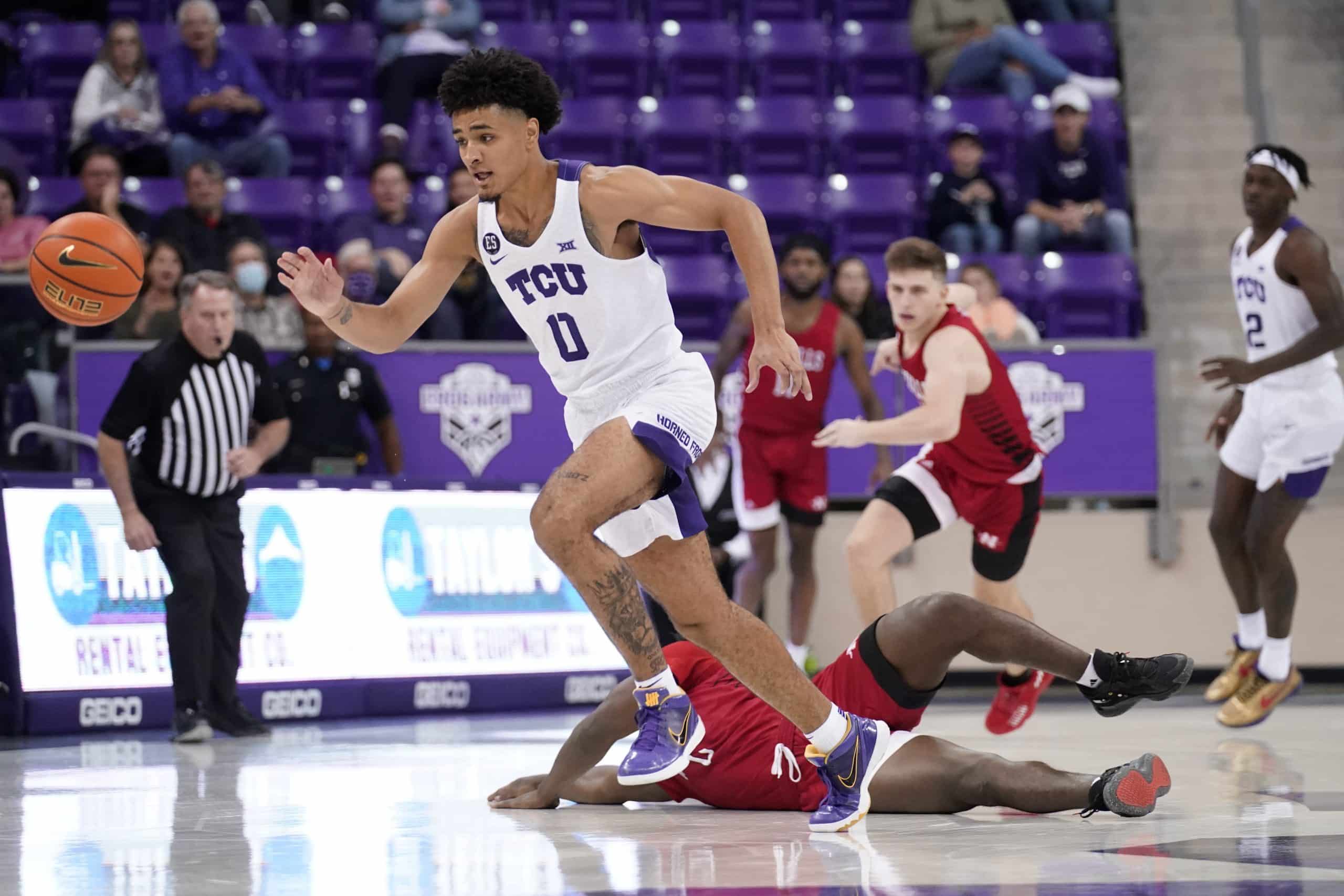 Micah Peavy had his best game of the season against Oklahoma. He and TCU take on Oklahoma State next (The Associated Press/Tony Gutierrez).

Here’s a numbers game to follow Wednesday night when the TCU men’s basketball takes on Oklahoma State in Stillwater.

The Horned Frogs have won two straight games, have won both of their road games so far this season, and have won the past two games against their Wednesday opponent, Oklahoma State.

It won’t be easy, despite the Frogs winning last season at Gallagher-Iba Arena. Oklahoma State is coming off a victory against then-No. 1 Baylor on Saturday. The Cowboys defeated then-No. 14 Texas for their other Big 12 win this season.

Oklahoma State returns four starters from last season, though only three start. Four of their five projected starters are guards, including Kansas transfer Bryce Thompson. TCU could have a size advantage inside, though the Cowboys start 7-footer Moussa Cisse. He’s a transfer from Memphis, as is TCU guard Damion Baugh.

Here are two more key numbers: Oklahoma State is 9-0 when it holds opponents to under 38% shooting and forces more than 18 turnovers.

About TCU: The Frogs beat Oklahoma 59-58 in overtime Saturday even though leading score Mike Miles Jr. was held under double figures (six points) for the first time this season. However, Miles delivered the key assist on Chuck O’Bannon Jr.’s game-winning 3-pointer. … O’Bannon and Peavy scored a team-high 11 points against Oklahoma. The total was a season-high for Peavy, who also led the Frogs with six rebounds and four assists. … The Frogs continue to lead the country with 15 offensive rebounds per game. … TCU received four votes apiece in the Associated Press Top 25 and the coaches’ poll. … John Denton and Collin Boddicker will have the radio call. Brian Estridge is off.

About Oklahoma State: Two of the Cowboys’ projected five starters are from the DFW area, guard Avery Anderson III (Justin Northwest HS) and guard Isaac Likekele (Mansfield Timberview HS). Anderson averages 10.3 points per game while Likelele 7.3 points and 5.9 rebounds. … Bryce Williams leads Oklahoma State with 10.9 points per game, but Bryce Thompson scored a game-high 19 points Saturday in the upset at Baylor. … The Cowboys reached the NCAA Tournament last season as a No. 4 seed behind first-team All-American Cade Cunningham, the first overall pick in the NBA Draft.  … Oklahoma State leads the all-time series 27-11 and 13-3 in games played in Stillwater.