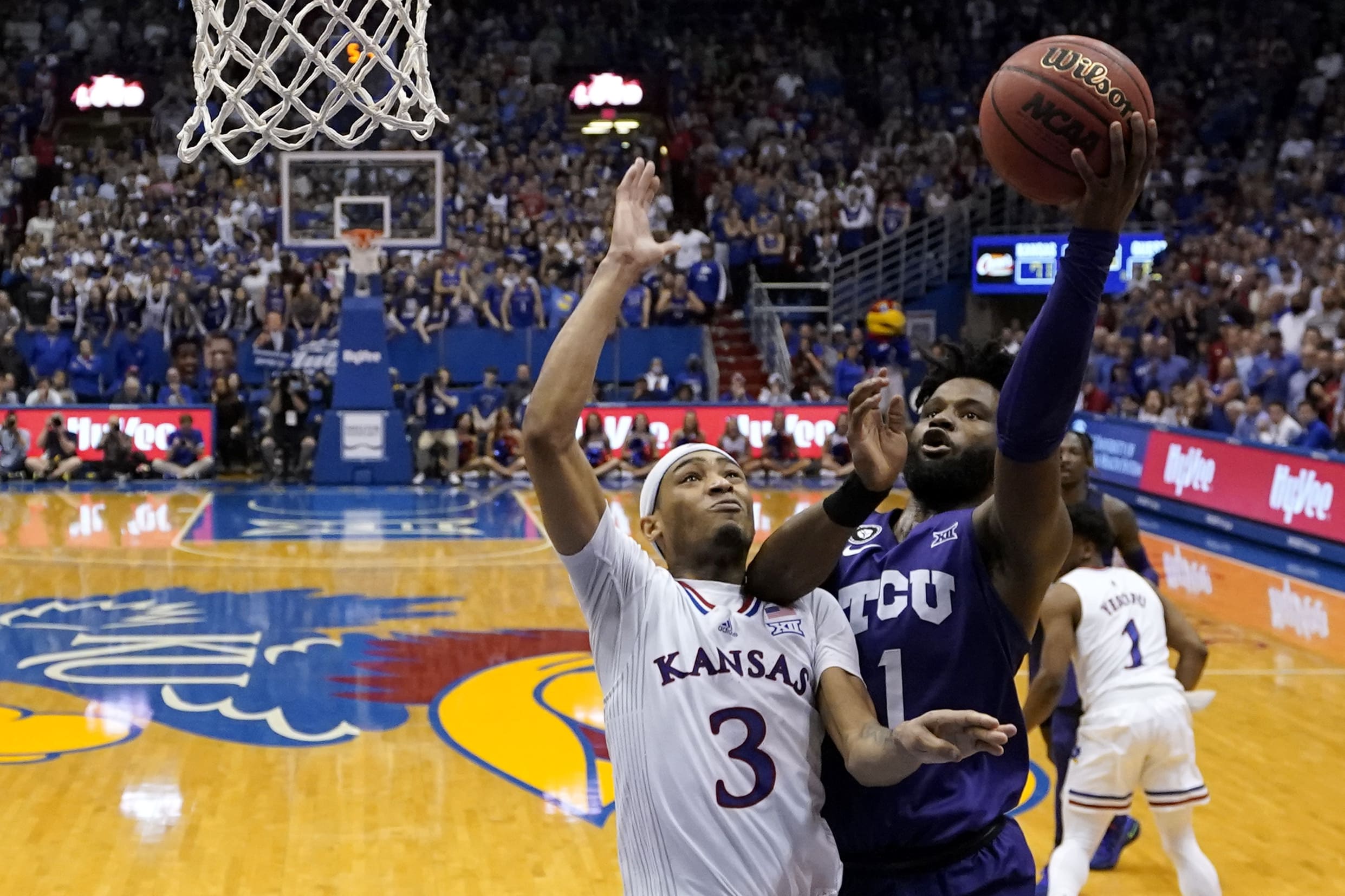 TCU men’s basketball tonight: Kansas again? This one is for a spot in the Big 12 title game

Home » TCU men’s basketball tonight: Kansas again? This one is for a spot in the Big 12 title game

This play at the end of the TCU-Kansas game last week was ruled a no-call and helped dictate the final outcome (The Associated Press/Charlie Riedel).

The reward for the TCU men after storming back to upset No. 22 Texas on Friday is a game against No. 6 Kansas on a not-so-neutral court in Kansas City, Mo.

Make no mistake: It is a reward.

The winner of the first Big 12 tournament semifinal game will advance to the finals Saturday with the chance to secure the conference’s automatic bid to the NCAA Tournament. Both teams are already forecast to be in the Big Dance, and the Jayhawks could emerge as a No. 1 seed with another championship.

Kansas will have to beat TCU first, and these two teams are wildly familiar with each other.

They will be playing the third time in 10 days. The fourth-seed Frogs won the first game March 1 in Fort Worth, and the top-seeded Jayhawks won the rematch two nights later in Lawrence.

That game went down to the final seconds. TCU was down three with 9.5 seconds remaining when Mike Miles Jr. went the length of the floor for layup attempt rather than a tying 3-pointer. The layup was blocked, though he and TCU coach Jamie Dixon thought there was a foul.

The biggest question for TCU entering is game is is how effective Miles will be playing on a twisted ankle from the Texas win.

“I landed on somebody’s foot,” he said. “But I went up and went in the back, got it taped extra even more, and I just wanted to get back there and help my team.”

The Frogs will need him if they hope to advance.

About TCU: The Horned Frogs are coming off 65-60 victory over Texas in the quarterfinals in which they erased a 20-point deficit. Damion Baugh scored a game-high 17 points and made the key pass to Eddie Lampkin Jr. for the go-ahead basket with 39.2 seconds remaining. Baugh, Lampkin (10) and Mike Miles Jr. (13) scored in double figures. Emanuel Miller just missed with nine points, but he grabbed 12 rebounds. … TCU is in the Big 12 semifinals for only the second time. The last time was in 2017, when the Frogs beat No. 1 Kansas in the quarterfinals before losing to Iowa State. … Oklahoma, which upset Baylor, will play Texas Tech in the other semifinal game.

About Kansas: The Jayhawks, ranked sixth by the Associated Press, are coming off an easy 87-63 victory over West Virginia, which beat TCU on Saturday. Ochai Agbaji, the Big 12 Player of the Year, led four Kansas players in double figures with 18 points. Christian Braun, a 6-foot-6 guard known more for his 3-point shooting, scored 11 points and grabbed a game-high 14 rebounds. … Kansas has won at least a share of 20 of the 26 Big 12 regular-season championships, including No. 20 this year (tie with Baylor), and 11 Big 12 tournament titles. The Jayhawks, though, haven’t won one since 2018. … Kansas leads the all-time series with TCU 23-3.