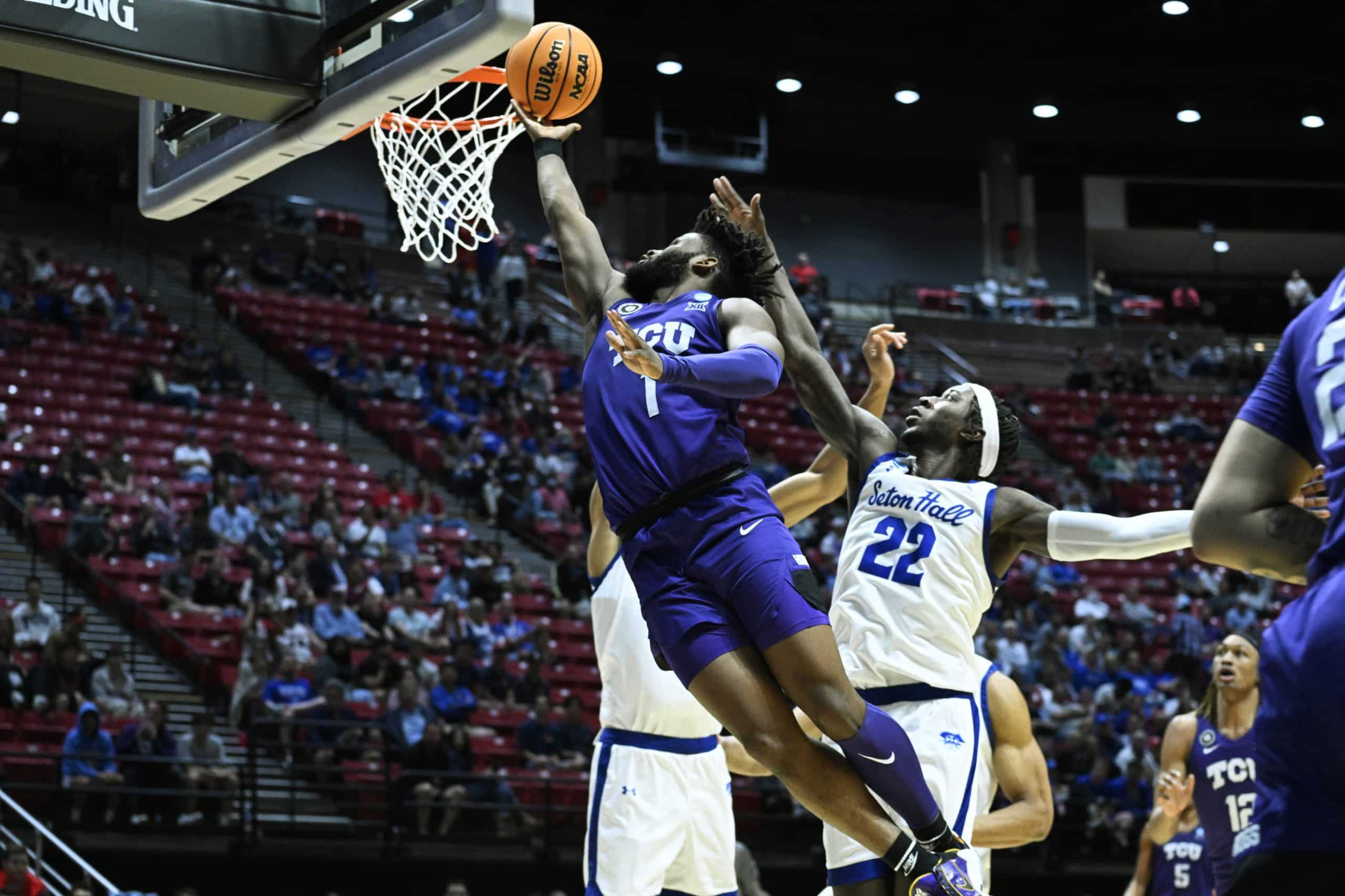 Mike Miles Jr. was able to get to the rim Friday against Seton Hall, but Arizona might do a better job against his drives (The Associated Press/Denis Poroy).

SAN DIEGO — The goal for each NCAA Tournament game is the same for No. 1 seeds as it is for all the others: survive and advance.

For Arizona, the top seed in the South Region, it must survive yet another upset bid against the kind of physical opponent it hasn’t faced often this season.

For TCU, the ninth seed, it must replicate its defensive performance from the opening round and be able to make shots from outside the paint.

The winner Sunday night at Viejas Arena advances to the Sweet 16 on Thursday in San Antonio to play fifth-seeded Houston.

If the Horned Frogs didn’t have Arizona’s attention before Friday, they do now. The Wildcats can be beaten, and they say they won’t be taking TCU lightly.

“They’re great defensively,” Arizona coach Tommy Lloyd said. “And then on top of that they’re extremely physical. They’re a great rebounding team. That’s alwasy been a trademark of Jamie’s teams.”

About TCU: The Horned Frogs are coming off a 69-42 victory Friday over Seton Hall for their first NCAA Tournament win since 1987. Mike Miles Jr. led all scorers with 21 points and Damion Baugh added 14 to lead a balanced scoring attack. … The Frogs held Seton Hall, the eight seed, to only 28.8% shooting, the lowest mark against TCU in seven seasons. The 42 points were the low for a Frogs opponent this season. … Arizona will be the sixth game TCU has had this season against the No. 1 seeds in the tournament. The Frogs played Baylor twice and Kansas three times, going 1-4 with a March 1 victory over the Jayhawks. … Coach Jamie Dixon has never faced Arizona in his career, and TCU has played Arizona only twice and not since Dec. 30, 1952.

About Arizona: The Wildcats are coming off an 87-70 victory Friday over No. 16 seed Wright State. Five players scored in double figures, led by 18 from guard Bennedict Mathurin. He is projected to be a lottery pick in the NBA Draft this summer after averaging 17.4 points and 5.6 rebounds per game. … Arizona will play two big men at a time, though Azoulas Tubelis plays away from the basket as much as he does inside. Christian Koloko blocked 97 shots this season, and could dissuade the Frogs from attacking the rim. The third big man is Oumar Ballo, who comes off the bench. … One question for Arizona is the status of guard Kerr Kriisa, who has been dealing with an injury. He and Mathurin led the team with 78 made 3-pointers.