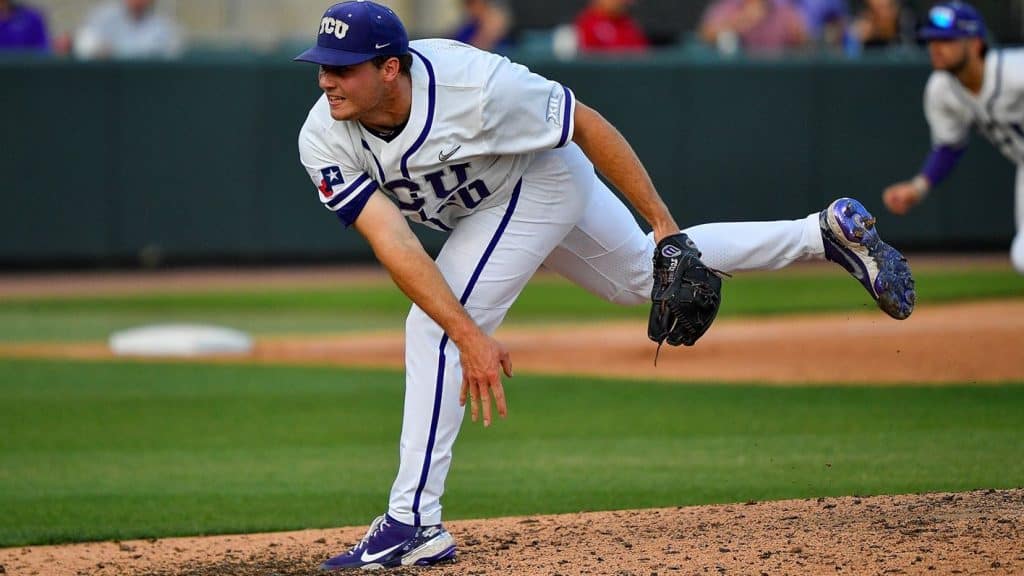 Cam Brown entered Friday with TCU trailing 3-1 in the second inning and didn’t exit until after the Frogs had rallied into a 9-3 lead (TCU athletics).

Just inserting Austin Krob into the Friday night start in the rotation didn’t mean that the TCU left-hander was ready to throw a complete-game shutout.

He’s still not fully built up after an early-season injury, and Horned Frogs coach Kirk Saarloos understands when enough is enough.

So, when Krob allowed three runs Friday during a stressful first inning at Lupton Stadium, that was enough.

Could he have returned? Probably. Is it more important to have him healthy for the Big 12 tournament later this month? Definitely.

But the Frogs needed someone in their bullpen to hold things where they were, and right-hander Cam Brown delivered.

The on-again off-again starter tossed five scoreless innings before allowing two runs (one earned) to open the sixth, and TCU scored seven times in the fifth before holding on for a 9-7 victory to open a weekend series against Oklahoma.

Bobby Goodloe broke a 3-3 tie in the fifth with an RBI double that started a stretch of six straight hitters reaching with two outs. Kurtis Byrne, Gray Rodgers and Porter Brown followed with RBI hits.

Goodloe delivered a sacrifice fly in the sixth to make it 9-3.

Things got interesting late, as they have a tendency to do. The Sooners had the potential tying run at the plate with no outs in the ninth, but Garrett Wright cleaned things up for his third save of the season.