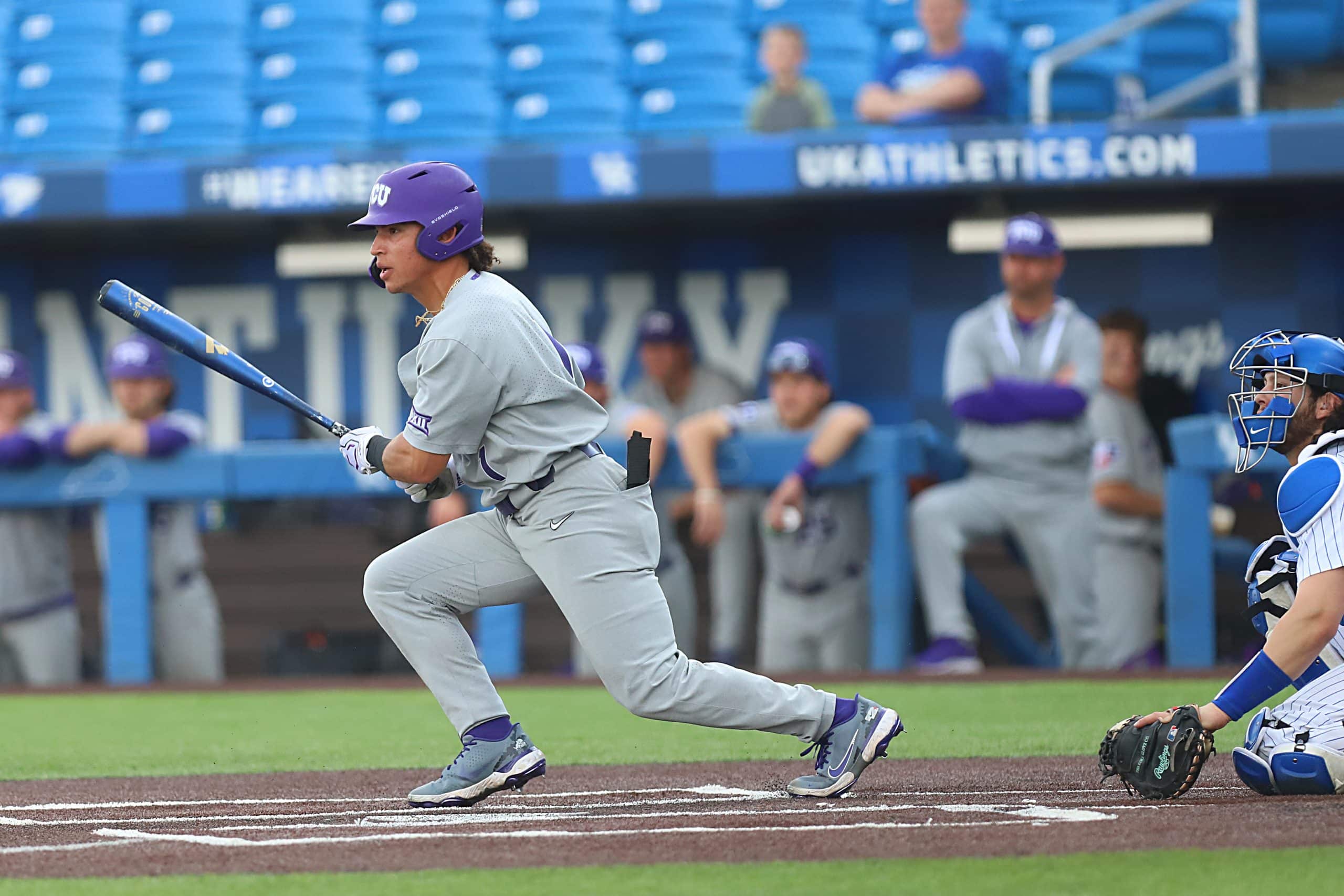 Elijah Nunez had a stellar weekend for the Frogs (TCU Baseball).

TCU split Saturday’s doubleheader with Kentucky, losing the series but avoiding the sweep.

The Frogs sit at 8-3 on the season and head to Louisville, Ky., on Tuesday to play Louisville before returning to Fort Worth.

A three-run home run off the bat of Chase Estep made the difference in this one as Kentucky clinched the series.

Riley Cornelio (1-1) took the loss, pitching into the fifth inning for TCU. He walked one and struck out four, but also gave up five runs on six hits.

A double by Aaron Fogel in the first inning put Kentucky on the board 1-0.

The Frogs had a chance to get a run across in the third, with Kurtis Byrne standing on second base and two outs.

Nunez hit a hard ground ball into left field, but Boyers was thrown out at home plate. A review of the play upheld the call.

Back to back two-out doubles in the fourth gave the Wildcats a 2-0 lead.

Nunez halved the lead in the fifth inning, singling up the middle to bring home Byrne.

Byrne made the start at catcher despite leaving Friday’s game after taking a pitch to the face.

TCU scored in five of the first seven innings of the game to build a 7-0 lead, which the Wildcats had erased by the eighth inning.

He took a shutout into the seventh, affording the Frogs the consistency on the mound that had been missing most of the weekend.

Kentucky finally got to Walker in the seventh.

After putting two runners on with one out, Walker gave way to Augie Mihlbauer. Mihlbauer walked the first batter he faced and then gave up a grand slam to Jacob Plastiak. That ended Mihlbauer’s night, but the scoring didn’t stop for the Wildcats.

Caleb Bolden entered the game, giving up a single followed by a two-run home run. Just like that, TCU’s lead had almost evaporated.

Kentucky knotted things up in the eighth on a rare Brayden Taylor error.

Taylor charged a bouncing ground ball, but it hopped over his glove into left field. Estep scored from second on the error.

TCU responded in the top of the ninth with five runs. Porter Brown got the scoring started with a double to left field, bringing Byrne around to score.

After Nunez was intentionally walked, Luke Boyers singled in a run.

River Ridings (1-0) gave up his first run of the year in the ninth, a solo home run to Fogel. Ridings gave up a single before inducing a 4-6-3 double play, followed by a soft line out to Nunez to end the game.