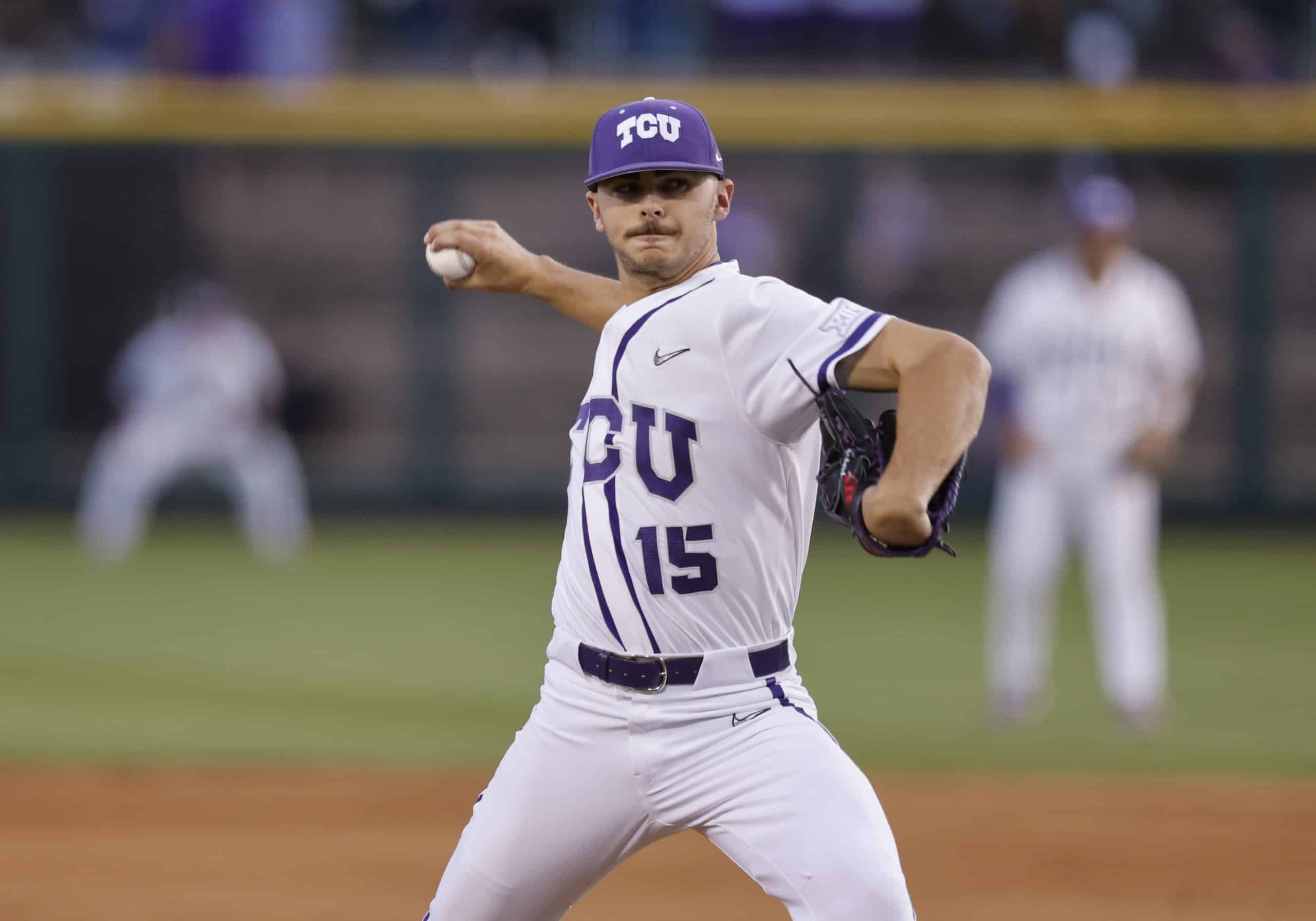 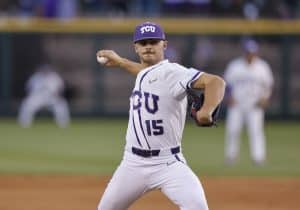 FORT WORTH — TCU moved to 16-5 on the season and 3-1 in Big 12 play Friday night with a 7-5 victory over Kansas State. Riley Cornelio notched his team-high third win of the season, touching 98 mph with his fastball and working out of several tough situations.

“Any time you go eight shutout innings, your next start is not about trying to match that.” TCU coach Kirk Saarloos said after the win. “It’s a whole new day, it’s a whole new opportunity, and I thought Riley did a good job.”

TCU got the scoring started in the first inning, loading the bases with no outs. Gray Rodgers hit into a fielder’s choice, scoring Elijah Nunez. Next, a wild pitch scored Brayden Taylor, before an attempted pickoff throw that went wide of the bag scored TCU’s third run of the inning.

Kansas State got two runs back in the top of the third thanks to a double off the wall in deep right-center field, but Cornelio settled down and got out of the inning without any more damage being done.

“I felt like in the third it was overcompensating,” Cornelio said, “Lack of stuff, overthrowing.”

Defensively, the Frogs had his back throughout the evening, helping Cornelio out of several situations that could have let Kansas State back in the game.

“Our defense is tremendous,” Cornelio said. “Any time you go out there and you have a defense like that, you have to fill it up.”

TCU responded to the two runs allowed in the third with two of their own. Kurtis Byrne ripped a single up the middle to score David Bishop and Tommy Sacco, extending the Frogs’ lead to 5-2.

Cornelio then settled down, pitching through the fourth and fifth innings without any trouble before finding another bump in the road in the sixth. With runners on second and third and two outs, Saarloos made a few steps out of the dugout as if he were going to pull Cornelio. Cornelio waved him off, mouthing “I’ve got this guy” to his head coach.

Saarloos allowed Cornelio to stay on the mound, and he was rewarded when the sophomore righty got a strikeout to end the inning.

“I would like for our guys to be able to clean up their own mess,” Saarloos said, “When Riley mouthed that to me I knew that he had the confidence to execute some big pitches and he threw three amazing breaking balls. That’s a big inning in terms of getting out of that because the whole rest of the game could have been a lot different.”

Said Cornelio: “The truth of the matter is that I always want the baseball. Any time he comes out, or I think he’s about to come out, I’m looking over there and I’m saying ‘trust me.’ And that’s probably the greatest thing about this team is we all trust each other. We trust coach Saarloos and coach Saarloos trusts us.”

The Frogs tacked on two more runs in the seventh when Bishop doubled down the left-field line and Taylor came home to score. Bishop scored two batters later on a sacrifice fly by Sacco.

Luke Savage pitched two clean innings in relief to help the Frogs get to the ninth inning, but Kansas State didn’t go quietly. With three right-handed batters coming up, Saarloos went to Caleb Bolden to close out the game. Bolden put two runners on base before getting pulled for Augie Mihlbauer.

Mihlbauer promptly gave up a single that scored a run, cutting TCU’s lead to 7-3. Mihlbauer then gave way to River Ridings. Ridings allowed a single to drive in two more runs before the tall lefty recorded the final strikeout to end the game.

It was Ridings’ seventh save of the season.

TCU hosts the Wildcats at Lupton Stadium at 2 p.m. Saturday with a chance to clinch the series. It would be TCU’s first regular-season series win over Kansas State since the 2018 season.