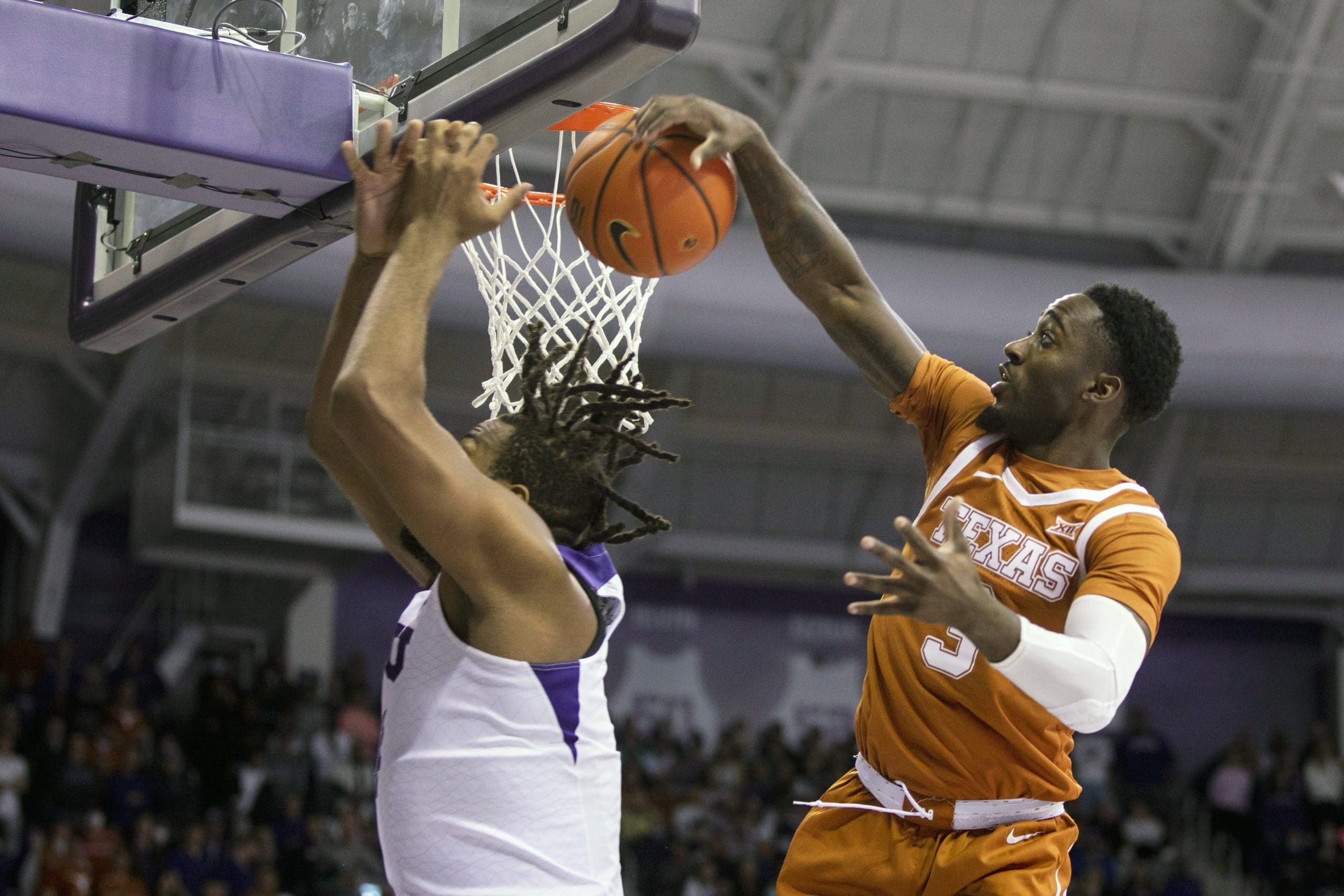 Eddie Lampkin Jr., and the rest of the Horned Frogs found the going tough against Texas’ defense (The Associated Press/Gareth Patterson).

FORT WORTH — The most frequently heard noise Tuesday night from a record Schollmaier Arena was groans. The runner-up was screams of horror.

Groans after a half-dozen airballs, caused by a stiff Texas defense.

Groans after turnovers, the biggest complaint this season by coach Jamie Dixon

The largest cheer of the night —larger even than the one for football coach Sonny Dykes — was reserved for the halftime act of an acrobat named Christian and his little chihuahua, Scooby.

They were pretty good, and more entertaining than the home team in a 73-50 stinker that showed how much better TCU needs to be.

“It’s embarrassing,” guard Mike Miles Jr. said. “We got our you know what kicked. Everything went wrong the whole game. Nothing went right.”

Seemingly every loose ball ended up in the hands of a Longhorns player.

Dixon apologized afterward to an all-time crowd of 8,412.

“We were a step slow, we were pushed around, we were knocked around, and the stats, outrebounded by 10, is a clear indicator,” Dixon said. “We talked about it but didn’t get the point across, obviously.”

TCU committed 13 turnovers, their low in Big 12 play, but eight of them came in the first half as things escalated quickly after the score was tied at 10 only 6:13 into the game.

The Longhorns (15-5, 5-3) needed just more than a minute to score 11 straight points. TCU never got closer than seven the rest of the way as Texas closed the half on a 33-13 run.

“There’s no question we played well,” Texas coach Chris Beard said. “Jamie does a great job. I think this an NCAA Tournament team, in my opinion. So for us to come on the road and really control the game, I thought, probably says a lot about our players.”

TCU did its part to fuel the Longhorns, committing four of its first-half turnovers during the 9-0 run. The Frogs went 0 for 9 on 3-pointers, and only 7 for 14 from the stripe after Texas provided a sliver of an opening by putting them in the bonus and double bonus.

Emanuel Miller, who scored 13 points, said the Frogs need to learn from the loss. The biggest lesson, he said, is how hard they must compete each game.

Miles, who scored a team-high 14 points after three straight games in single digits, suggested that TCU was feeling too good about itself after a 15-point road win Saturday over then-No. 15 Iowa State.

Dixon said he couldn’t explain where it all went wrong after what he said were a couple good days of practice, and he isn’t sure quite sure where the turnaround starts.

“I haven’t had many losses like this,” Dixon said. “This is bad.”