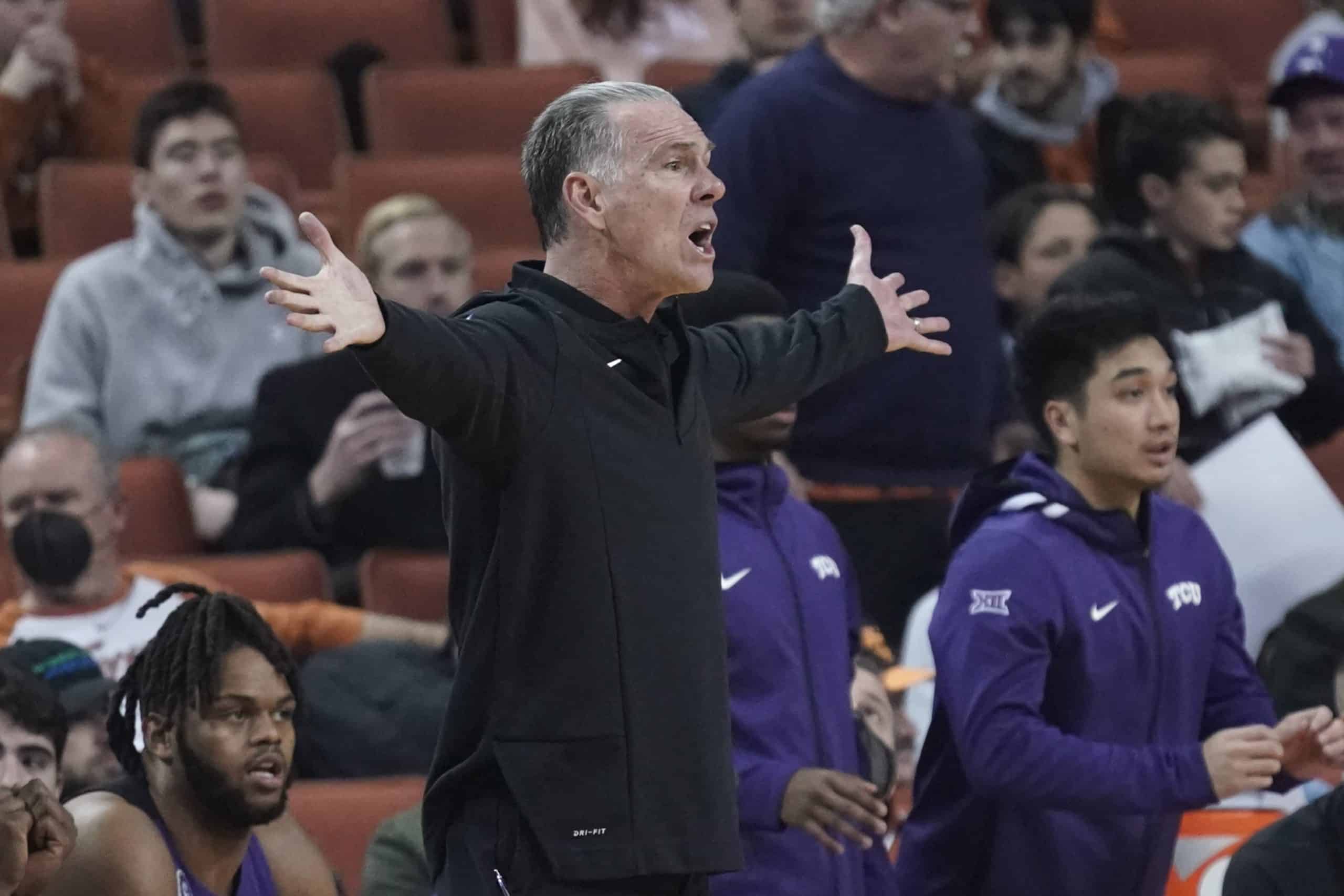 Too many turnovers, not enough rebounds and far fewer free throws cost TCU at Texas

Home » Too many turnovers, not enough rebounds and far fewer free throws cost TCU at Texas

Jamie Dixon was left perplexed by the drastic advantage Texas had at the free-throw line, as well as the Frogs’ 17 turnovers (The Associated Press/Chuck Burton).

A neutral basketball observer would have a hard time looking at the free-throw disparity Wednesday night at the Frank Erwin Center and not think that the three-man officiating crew didn’t dictate the outcome.

Both the lopsided advantage and who picked up the fouls were a critical part of a game TCU needed to win to boost its NCAA Tournament chances.

The officials, though, didn’t turn the ball over 17 times as the Horned Frogs did and weren’t outrebounded by two as the Frogs were.

Those are the two things coach Jamie Dixon says can’t happen if the Horned Frogs are going to win games.

The Frogs (17-9, 6-8 Big 12) led by as many as 10 points in the second half but were bogged down over a four-minute stretch that was filled with turnovers, a shortfall of second chances and too many Longhorns layups.

Dixon didn’t gripe about the number of attempts the Longhorns had. They shot 29 free throws and made 24. TCU tried 11, making eight.

Instead, Dixon lamented that the Frogs weren’t able to get to the line more, and blamed himself for not putting the offense in the right spots.

Part of the problem was who was being whistled. TCU’s top two rebounders and best players inside, Emanuel Miller and Eddie Lampkin Jr., spent much of the game in foul trouble and forced TCU to play with a smaller lineup.

Combine that with the turnovers, and TCU came up short on offensive chances. Also, Texas (20-8, 9-6) converted the turnovers into 30 points.

“When you turn it over 17 times, that takes away 17 opportunities,” Dixon said. “But I’ve got to do a better job and and that’s what I’m looking at. So, I’m putting it on me.”

As for the free throws, the Frogs did foul down the stretch to try to stay in the game. However, Texas had a massive free-throw advantage throughout.

TCU didn’t shoot a free throw in the first half.

“They did what we wanted to do — free throws made, more than our attempts,” Dixon said. “It destroyed us there.”

TCU has four conference games remaining, and might not be the favorite in any of them. First up is No. 9 Texas Tech at 5 p.m. Saturday in Fort Worth, followed by a home-and-home with No. 5 Kansas and the finale at West Virginia.

The Frogs are a tournament bubble team. A win at Texas, which appeared to be within reach with 13 minutes to go, slipped away and makes each remaining game a must-win as improbable as that might seem.

“There was only one recipe and one way of doing it, and we didn’t do it the way that needed to be done,” Dixon said.