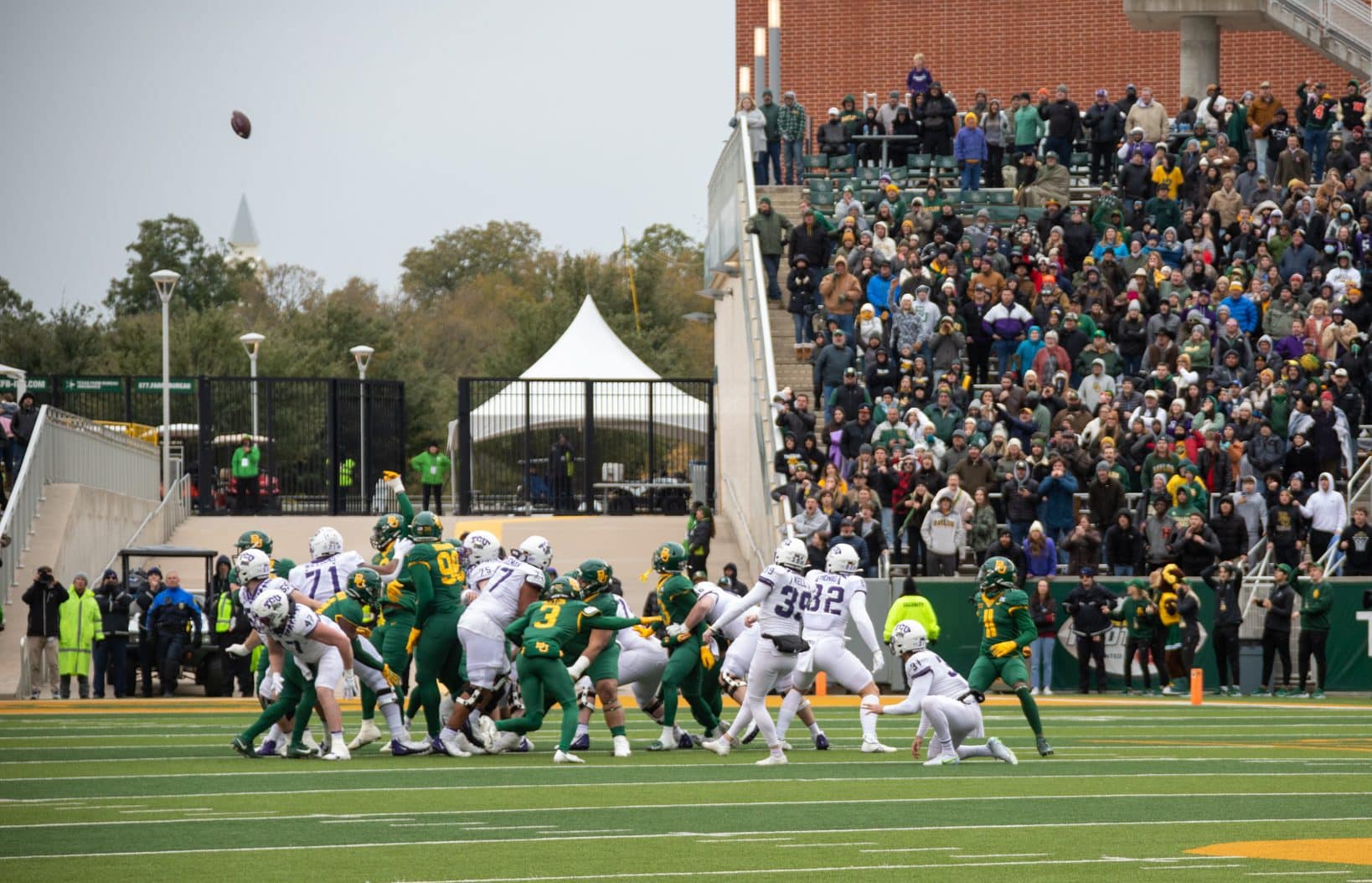 By Jamie PlunkettNovember 19, 2022No Comments

WACO — TCU players sprinted off the bench to meet Griffin Kell near the 30-yard line. His kick has just split the uprights as time expired to give the Frogs a 29-28 come-from-behind win over Baylor.

In the waning seconds of the game, the Frogs ran what they call “bazooka,” where the special-teams unit sprints on to the field as time winds down and attempts a field goal.

“We practice it every Thursday, exactly like that,” coach Sonny Dykes said. “You’ve got to give Griffin a ton of credit. Missed an extra point earlier in the game. And I know he felt terrible for that, got a chance to redeem himself. Hit it right down the middle. That’s a great kick.”

The Frogs are now 11-0, with both their Big 12 championship and College Football Playoff hopes fully in tact.

The Frogs were without wide receiver Derius Davis on the day, and they lost both probable all-conference picks Quentin Johnston and Kendre Miller to injury in the second half. Neither was in on TCU’s final drive, which began with 1:34 remaining in the game.

Max Duggan, who finished with 327 passing yards, two touchdowns (one rushing) and an interception, orchestrated a nine play, 46-yard drive to put the Frogs in position to run their bazooka drill. He found Taye Barber for a 19-yard gain, then connected with Jared Wiley for a 9-yard gain.

Duggan then took matters into his own hands, running for 12 yards to get the Frogs into field-goal range.

Before that, though, the game-winning drive almost didn’t happen. After forcing Baylor into a theee-and-out, the Frogs lined up to return the punt on fourth-and-3.

But the Frogs had 12 men on the field. Millard Bradford realized it just in time, sprinting off the field before the ball was snapped and avoiding a game-ending penalty.

“We almost got caught on the punt return with 12 on the field,” Dykes said. “We were lucky to get a guy off the field. We had a little miscommunication on that, and we were fortunate they didn’t snap the ball. It would have been a terrible way to lose the game.”

Baylor’s game plan was clear from the jump: run the ball. The Bears amassed 153 rushing yards in the first half, including 125 on their first three possessions, giving TCU every look under the sun.

Baylor used a healthy variety of run schemes on their first drive to march down the field, amassing 56 rushing yards on the first drive. That was more than Texas had in the entire game a week ago. The drive ended in a touchdown run from Qualan Jones, putting Baylor up 7-0.

TCU responded with a seven play, 72-yard drive capped by Duggan’s fifth rushing touchdown of the year to tie the game at 7-7.

Baylor and TCU traded touchdowns in the second quarter as well, taking a 14-14 tie into halftime.

Kendre Miller extending his touchdown streak to 12 games, just three behind LaDainian Tomlinson’s program record of 15 consecutive games. Miller’s rushing touchdown was his 14th of the season, moving him into fifth on TCU’s single-season rushing touchdown list. Kenneth Davis is fourth on the list, rushing for 15 touchdowns in 1984.

Tomlinson set the single-season record in 1999 with 22 rushing touchdowns.

Gunnar Henderson gave TCU its first lead of the game with a 26-yard touchdown catch in the third quarter. Duggan pump faked to the flat, drawing the safety and corner up in coverage and allowing Henderson to slip behind them down the sideline, and hit the receiver in stride for an easy touchdown. Kell, though, missed the extra point, and TCU led 20-14 with 5:34 left in the third quarter.

The Frogs’ lead didn’t last long, though, as the Bears marched down the field in 10 plays to score. Blake Shapen found Kelsey Johnson for his second score of the game to give Baylor the 21-20 lead.

TCU’s defense continued to struggle on third downs on Baylor’s next drive, giving up a 74-yard pass play on third-and-11. Baylor capitalized a few plays later when Richard Reese ran it in from a yard out to extend the lead to 28-20.

TCU almost tied the game with just over two minutes to go following an Emari Demercado rushing touchdown to bring the Frogs within 28-26. TCU went for 2, but Demercado dropped a pass near the goal line and the conversion failed.

Like they have every game this season, the Frogs maintained their composure and executed in the high-stakes moments, getting a three-and-out on the ensuing Baylor possession, then driving down the field and giving Kell a chance to win it.

With the win Dykes has now accomplished something Gary Patterson never did: beat Texas, Oklahoma, Oklahoma State and Baylor in the same year. Dykes has also beaten every other Texas school on his schedule this season, going 5-0 against in-state competition. The Frogs last accomplished that in 2020, going 3-0 against the Longhorns, Bears and Red Raiders.