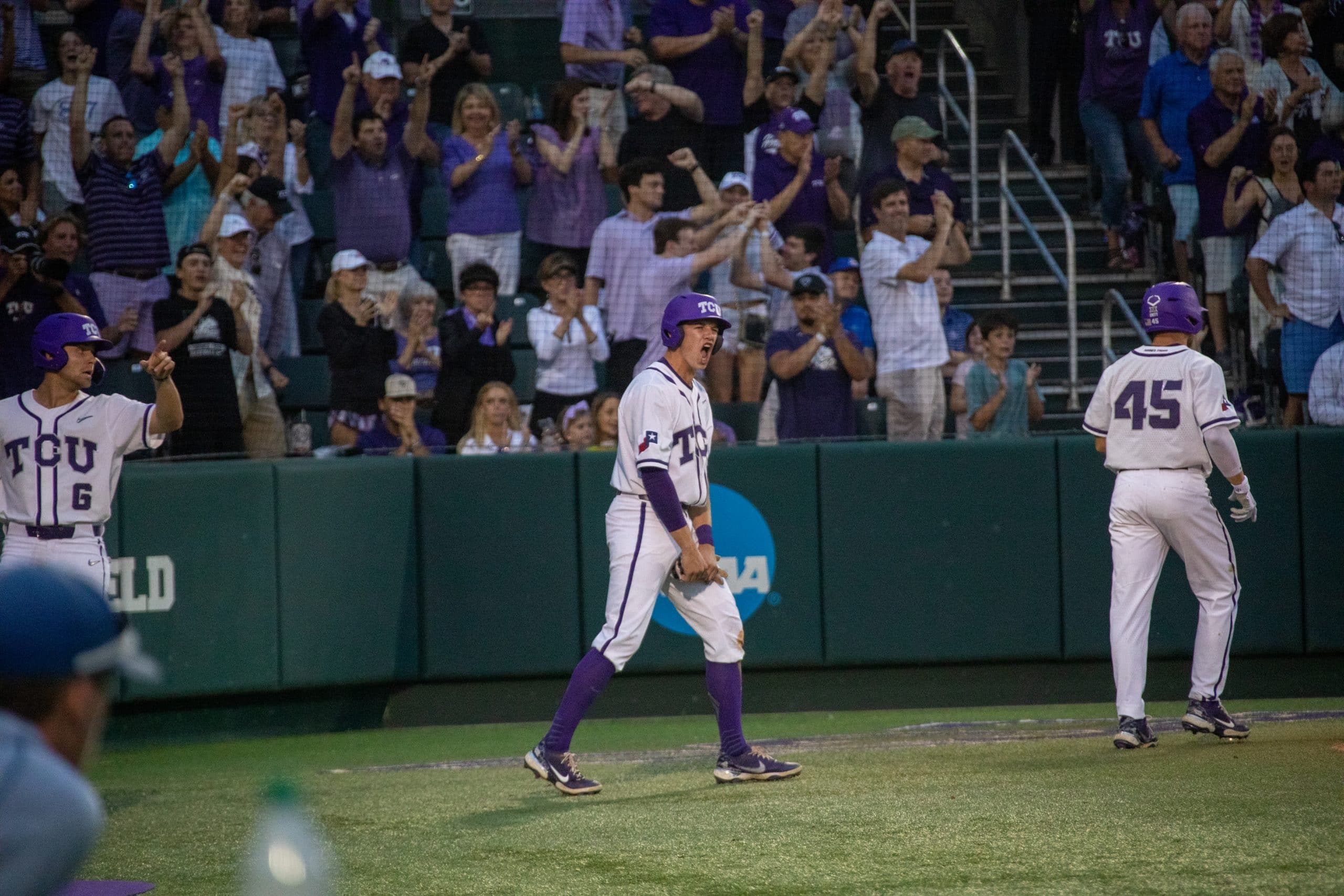 By Melissa TriebwasserMarch 2, 2022No Comments

TCU baseball has a star on its hands, as right-hander Cam Brown delivered another impressive performance under the lights Tuesday night at Lupton Stadium  against UT Arlington.

The sophomore, a candidate to earn a weekend role heading into the season, has proven himself to be a more than capable midweek guy, earning two victories in two chances in the early going of 2022.

Brown struggled in the first inning against UTA, allowing four straight one-out hits that led to two runs. But a double play got him out of the first with minimal damage, and his offense picked him up in the bottom of the frame.

The Frogs scored three runs on two hits with the big swing coming from Brayden Taylor, who launched his first home run of the year to straightaway center with a man on to tie things at 2. Tommy Sacco produced a run with a sacrifice fly to put the Frogs in front, and that’s all Brown would need to get his confidence back.

TCU added three more in the bottom of the second, and Brown was cooking. He went six strong innings, allowing five hits and striking out eight.

He retired 15 straight at one point.

Brown turned over a 7-2 lead to freshman Caedmon Parker, and the Mavericks took advantage of the highly touted freshman reliever making his collegiate debut. After getting Wilson Galvan to ground out to start the seventh, Parker allowed two hits, hit a batter and issued a four-pitch walk to drive in the Mavericks’ third run.

Conner Oliver got the Frogs out of the bases loaded jam with a fielder’s choice and gave way to Storm Hierholzer in the eighth.

The Mavericks, one of TCU’s most consistent rivals, didn’t go quietly. They put a runner in scoring position in the eighth and scored twice in the ninth after loading  the bases. But a parade of relievers managed to wriggle out of jams time and time again, with River Ridings slamming the door with back-to-back strikeouts to end the game.

Taylor, who has struggled (by his standards at least) over the past few games, drove in four runs as part of his three-hit night. Sacco, who is batting .487 on the season with a .710 slugging percentage, drove in two more runs on two hits to give him eight RBIs on the year. TCU had eight hits, and benefited from three UTA errors and five walks.

The Frogs will hit the road this weekend for their first true away series, as they head to Lexington to take on Kentucky. The Wildcats are also 7-1, but have yet to take on a Power Five program.