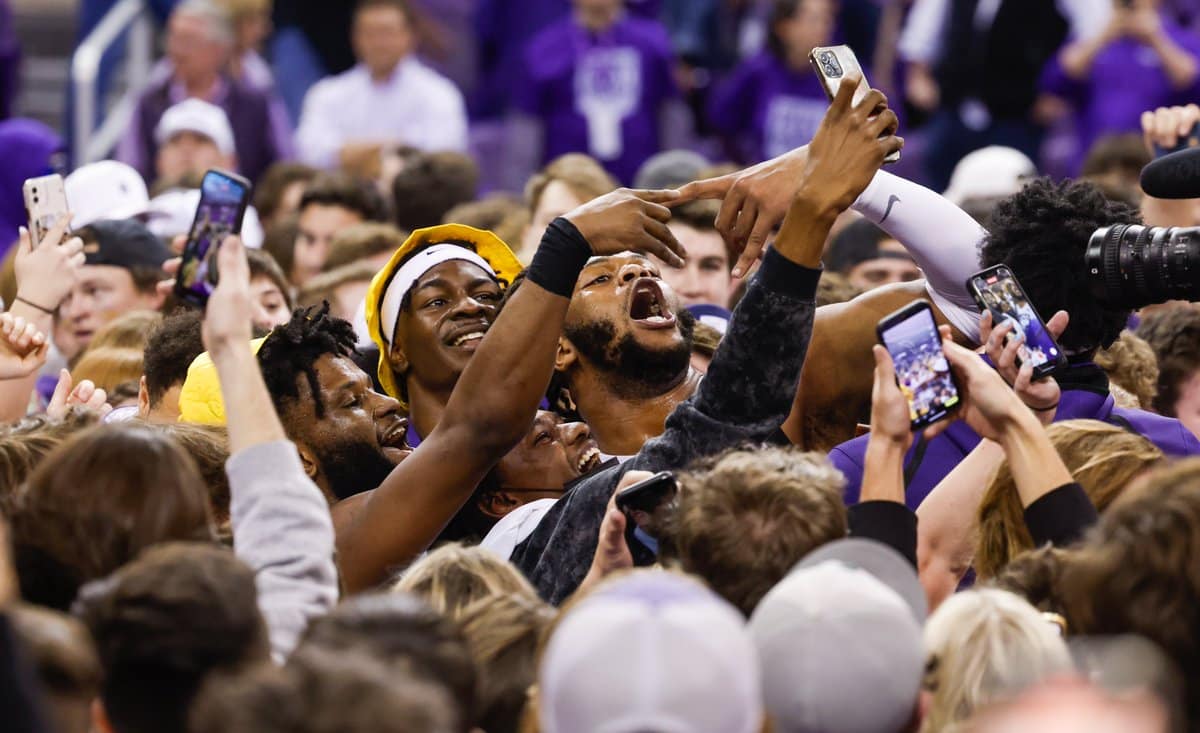 FORT WORTH — The clock ran down as Joseph Yesufu took one final shot for the Kansas Jayhawks. It missed, but it wouldn’t have mattered.

TCU students quickly leapt over the barrier and stormed onto the court, celebrating TCU’s 74-64 victory. The Frogs have won back-to-back games against ranked opponents for the first time in program history, and the win all but sealed TCU’s second berth in the NCAA Tournament in 24 years.

“It means everything,” forward Emanuel Miller  said. “From the students, from the coaches. … To get this done in front of our home crowd, the last home game of the season, it means everything.”

Mike Miles Jr. led all scorers with 19 points, and Miller contributed 11 points, seven rebounds and two blocks. Miles, the sophomore guard who has battled wrist injuries for the last month and a half, scored 10 in the second half, including a step-back jumper with 2:02 remaining to put TCU by nine.

TCU pulled out to an early 7-3 lead thanks to efficient offensive possessions, but a 7-0 run from Kansas gave the Jayhawks the lead at the under-16 timeout. Five points from Jalen Wilson during the stretch powered Kansas, and he finished the half with nine points.

The Jayhawks extended their lead to 15-9 as TCU went through a dry spell, shooting just 1-4 from the floor and turning the ball over once. Francisco Farabello snapped the Frogs out of it with a wing 3, as TCU found a way to stifle any potential Kansas run for the majority of the night.

All in all, TCU’s first half was as clean as it has been all season. The Frogs committed only six fouls, and turned the ball over just four times. They out-rebounded Kansas 20-14. And still, the Jayhawks led 35-34 at the half after shooting 46.4% from the floor and hitting on 62.5% of their 3-pointers.

But TCU’s defense kicked in coming out of halftime, just as it did Saturday in an upset of Texas Tech.

A Miller layup gave TCU a 38-37 lead with 18:25 to go, and the Frogs never trailed again. While Miles, Miller and friends were extending TCU’s lead to as many as 12, the Frogs collectively stifled the Jayhawks’ conference-leading offense.

“I thought our ball pressure was good,” TCU coach Jamie Dixon said, “I think we contained the penetration as the game went on. I think that’s where we did the best job defensively. They’re so big and strong, you don’t look at them as being great penetrators, but they’re great at getting in the lane and kicking out.

“I think we got better at is as we played, and understood our switches and adjustments.”

Eddie Lampkin Jr. and Xavier Cork neutralized David McCormack for the majority of the night. The powerful center managed just 11 points and eight rebounds, and had to work for everything he got. Lampkin and Cork combined for 10 points and 14 rebounds as they powered the Frogs to a 47-35 advantage on the glass.

Meanwhile, the Frogs turned it over only seven times, their second lowest turnover total on the season and lowest in Big 12 play.