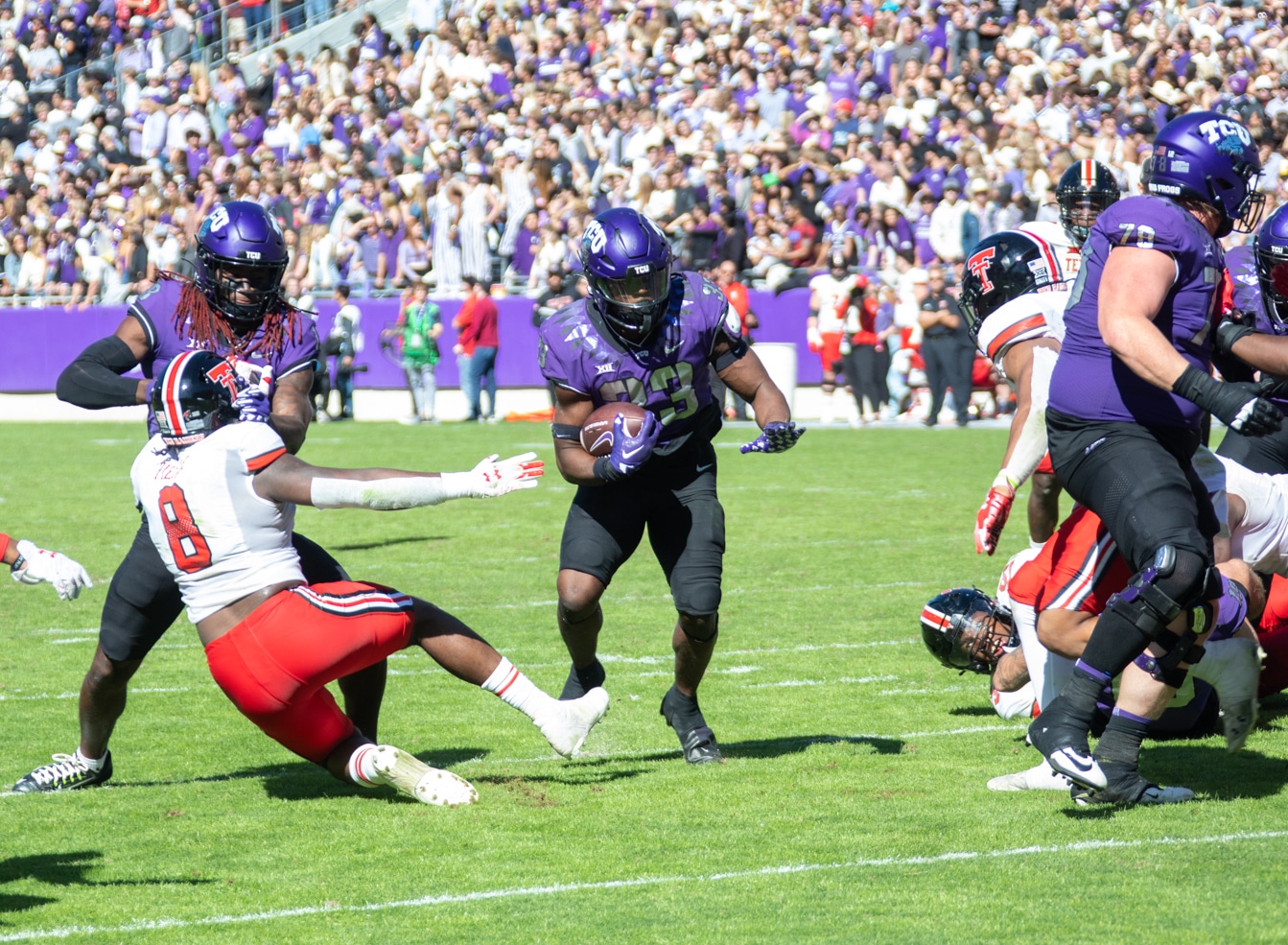 Frogs Today staff predictions: 10-0 is on the line as TCU visits Texas

By Jeff WilsonNovember 12, 2022No Comments

Home » Frogs Today staff predictions: 10-0 is on the line as TCU visits Texas

One last time, for those who have been in a coma this week or a Turkish prison, here are the storylines for tonight’s TCU game at Texas:

The Horned Frogs are 9-0 and ranked fourth in the College Football Playoff rankings.

Their best player, wide receiver Quentin Johnston, is questionable with an ankle injury.

TCU starts slow and can’t afford to get behind early on the road.

Former Frogs coach Gary Patterson, the architect of TCU football,  is a Texas special assistant who supposedly has been devising a defense to stop the high-powered TCU offense.

The Longhorns are favored by seven.

College GameDay was there.

The Frogs Today staff writers have their thoughts on what is going to happen at Darrell K. Royal Texas Memorial Stadium.

Jeff Wilson: In no way am I trying to take a shot at Gary Patterson, but I’m not sure he’s going to have the kind of impact on this game that some Texas fans seem to think.

Those who know these things see Patterson’s influence on the Texas defense, but the Longhorns aren’t going to overhaul their scheme for this game. Besides, based on Patterson’s last two stabs at the Garrett Riley-Sonny Dykes offense, in which SMU scored 83 points against the Frogs, Texas shouldn’t overhaul what it’s been doing.

I do buy into the idea that TCU can’t fall behind too badly early. It would be a big help if Quentin Johnston can play, even if it’s only 10-15 well-timed snaps. If he plays and the Frogs can keep pace with Texas in the first half, they’ll win the game. TCU 34, Texas 31

David Beaudin: TCU needs to approach this one like a boxing match.

The Longhorns will throw a few flurries early, as their first couple scripted series on offense have, at times, sent their opponents staggering to the canvas. This has proven to be a good strategy for redshirt freshman Quinn Ewers, who passed on his senior year of high school to attend Ohio State before transferring to Texas.

The fast start of the Longhorns is not something that matches up well for the Horned Frogs, with their slow starts in several games this season. The key to this matchup is if TCU can withstand the early haymakers and stay off the ropes to keep things close in the first half. In addition, they must continue to deliver consistent body blows to this Texas defense. If they can do so, I don’t think Longhorns coach Steve Sarkisian ever throws in the towel — especially with former Frogs head coach Gary Patterson in his corner yelling “encouragement.”  However, keeping it close and wearing the Longhorns down can put the Frogs in position to deliver the knockout punch in the fourth quarter.

TCU’s safeties must finish tackles, as they’ll be an integral part of the run-fit this week. Doing so with Longhorns star running back Bijan Robinson — who is in a higher weight class than most running backs who move like he does — will be quite the challenge. Moreover, Longhorns backup running back Roschon Johnson is another power-puncher TCU will have to contend with.

For the Frogs offense, quarterback Max Duggan will have to go to some quarterback run early and often, as adding a “plus-one” in the run game has proven trouble against this hybrid 3-4/4-3 defense. Additionally, the Frogs receivers need to block these quarters safeties, who play flat-footed and trigger on run plays in a hurry. Doing so should allow for some big-play shots behind these safeties after play-action sends them running up to the line of scrimmage.

This will be a tight contest and as the Frogs have done all season, they need to find a way to win — regardless if it is by  10 count, technical knockout or by decision. They simply want to raise their arms collectively to celebrate being 10-0.  I think they get it done in a close one.  TCU 31, Texas 28

Melissa Triebwasser: There’s not much I like about this game. I don’t like that College GameDay is in Austin for the second time this season, I don’t like that Texas can almost lock up a berth in the Big 12 championship game with a win, and I really don’t like the Frogs’ chances of slowing down Bijan Robinson.

Texas is a team that starts quickly, TCU one that is best in the second half. And while the Horned Frogs have been able to overcome double-digit deficits on multiple occasions on their home field, doing so on the road, in front of what is sure to be a raucous DKR, is a different story. I am not confident that TCU will slow down Texas early, especially without linebacker Dee Winters available, and I worry about the offense with Quentin Johnston still banged up.

Kendre Miller should be able to nearly match Robinson in the ground attack, and the wide receiver groups are comparable as well. Texas has an absolute freak at tight end with Ja’Tavion Sanders, who can cause all kinds of problems for the safeties and linebackers of TCU, and that’s the matchup I believe could determine the outcome. Quinn Ewers has, at times, looked elite but has struggled in less than ideal weather and the forecast calls for a chill in the air and just enough wind whipping around to be problematic. Whichever quarterback takes care of the ball and makes the best decisions will probably be victorious Saturday night.

I think this is a one-score game most of the evening, but ultimately the Cinderella story ends in Austin. The Frogs don’t make it to 10-0 tonight, but they’ll get revenge in Arlington later this season. Texas 35, TCU 31

Jamie Plunkett: TCU has shown incredible composure throughout the season, mounting comeback after comeback to maintain an undefeated record. Texas has been getting off to hot starts before fading in the second half. This could be another tale of two halves, where TCU is trailing at the break before making the halftime adjustments needed to win.

Remember, Texas took Alabama to the wire in Austin earlier this season. If the Frogs can eek out a win, that will be the feather in their resume’s cap. TCU 34, Texas 30