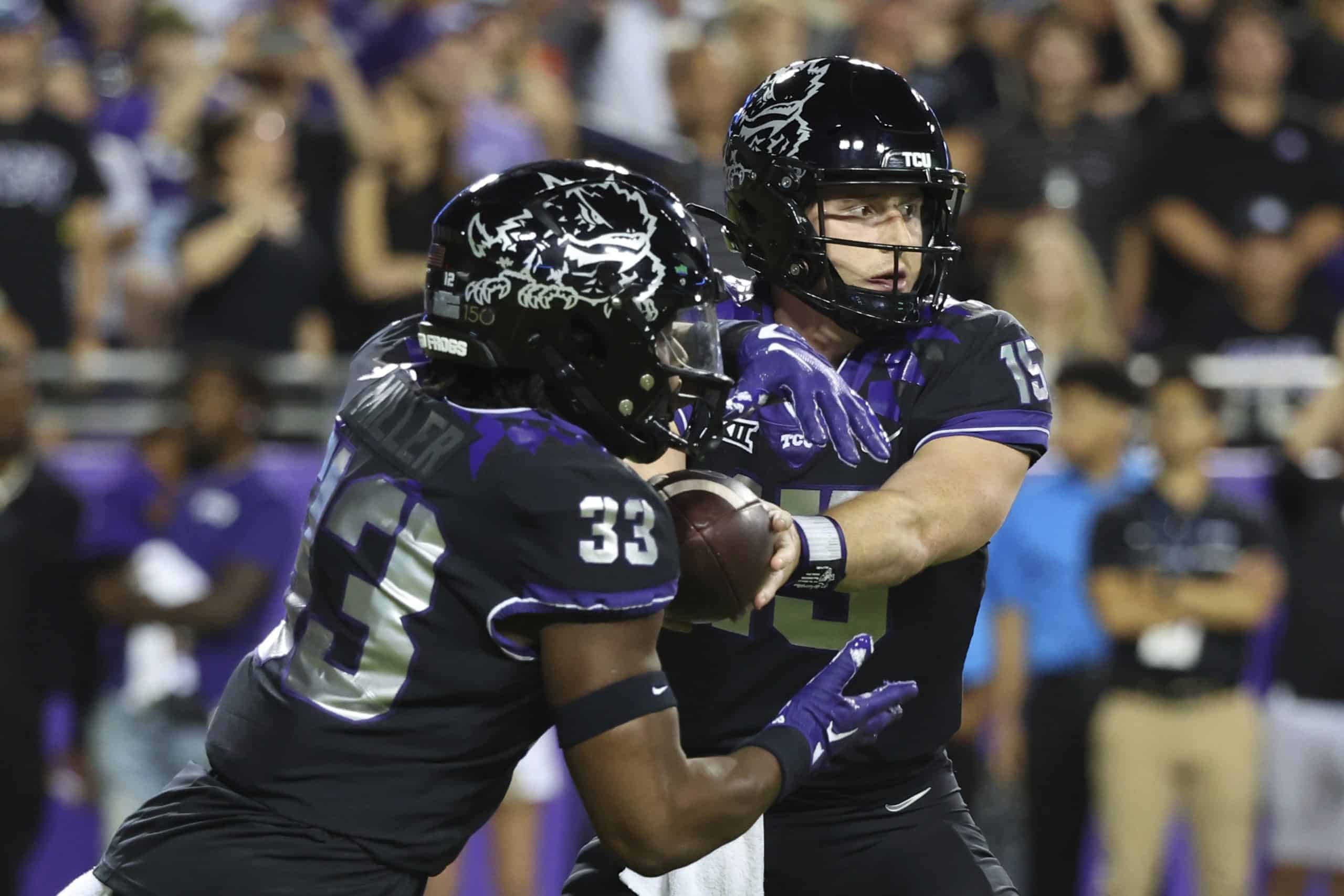 By Jeff WilsonOctober 29, 2022No Comments

Max Duggan and Kendre Miller have been a formidable combination so far this season for the TCU offense (The Associated Press/Richard W. Rodriguez)

Milan Puaskar Stadium can accommodate 60,00 people, which on West Virginia football home dates makes it the largest city in the state.

The fans can be rowdy. For some reason, they like to burn couches. There’s a chance someone on the visiting sideline is going to get hit by something thrown from the crowd.

It can be one of the most intimidating venues in college football. Multiple top-10 teams have fallen there before.

TCU is the No. 7 team in the country with one of the top offenses in the game. Quarterback Max Duggan is a Heisman Trophy candidate, and his case will get stronger the more the Horned Frogs win.

None of that stuff seems to matter to TCU.

Coach Sonny Dykes keeps waiting for players to show signs of smugness, but he hasn’t seen it yet.

The slow starts are bothersome, and Dykes has let the Frogs know that they can’t keep playing with fire.

The defense has been consistent in that it makes the necessary adjustments and buys the offense time to do its thing.

The West Virginia crowd will what it can to spark the Mountaineers and haunt the Frogs.

It’s likely to be a little weird Saturday, but can that really make TCU prone to an upset? The Frogs Today staff writers are here to forecast what will happen:

Jeff Wilson: If the Frogs are taking West Virginia lightly, they need to look no further than just a few weeks ago as Baylor rolled into Morgantown and left with a loss in game the Bears absolutely could have and should have won. The Frogs haven’t taken any opponent lightly to date, and were nothing but very respectful and wary of what West Virginia can potentially do. The Frogs know what’s at stake here. It’s a position they expected to be in when they committed to the Frogs, and now that they have it they aren’t going to spoil it by taking a nap today. There will be some bumps, but not enough to spoil the Frogs’ perfect start to the season. TCU 41, West Virginia 24.

Jamie Plunkett: TCU has gotten off to slow starts the past two weeks, falling behind both Oklahoma State and Kansas early before mounting comebacks. The Frogs don’t need to play with their food this week in Morgantown or give the rowdy West Virginia fans any reason to be loud. West Virginia’s secondary is in bad shape right now, consistently finding themselves out of position when the ball is snapped. That hurt the Mountaineers last week against Texas Tech, and it’s something the Frogs need to take full advantage of today. If Max Duggan and the offense can get rolling early, TCU should cover and move to 8-0. TCU 49, West Virginia 17.

Melissa Triebwasser: I’m in quite the conundrum here, having picked against the Horned Frogs each of the past four weeks, which has coincided with TCU beating four straight ranked opponents. But TCU is favored by more than a touchdown on the road, and by all intents and purposes is the better team. Weird things happen in Morgantown. Add in the specter of Halloween, homecoming and Neal Brown coaching for his job, and it certainly feels like the Frogs will get the Mountaineers’ best effort. But will it be enough? Injured, inconsistent and not executing at a high level, West Virginia is a different team than the one that shocked Baylor on a Thursday night two weeks back. Meanwhile, TCU is confident, playing at a high level, and seemingly more comfortable in both the offense and the defense weekly. The Mountaineers can score in bunches, but I think they’ll struggle to slow down the Frogs enough to pull off the upset. I imagine this one is far closer than TCU fans are comfortable with, but behind a big day from Max Duggan and Jared Wiley, the Horned Frogs prevail. TCU 45, West Virginia 27

David Beaudin: Brace yourself for some expert, groundbreaking, thorough and in-depth analysis that you’ll only find here. Ready? TCU is a much better football team than West Virginia right now. Yes, I said it.

Morgantown Magic is a realy thing, but generally that is reserved for night games —when the moonshine has been overpoured. However, I acknowledge that the pour starts early regardless. The 11 a.m. kickoff (noon EDT) is a godsend for the Frogs, who have lost by a total of 79 points in their past three trips to the Mountain State and have lost their past four meetings. However, this Frogs team has proven its worth in the Big 12, and the Mountaineers have struggled to find their identity. While they have shown flashes of solid play, they are ill-suited against the Frogs’ offense. West Virginia has shown it gets uncomfortable getting spread out against the run, gives up big plays (especially on play-action passes) and gets misaligned when an offense goes tempo.

TCU does all those things. This, combined with a Frogs defense that will welcome more of a pure pocket passer in Mountaineers quarterback JT Daniels, will allow TCU to run away with this one late after it being relatively close early. TCU 42, West Virginia 17