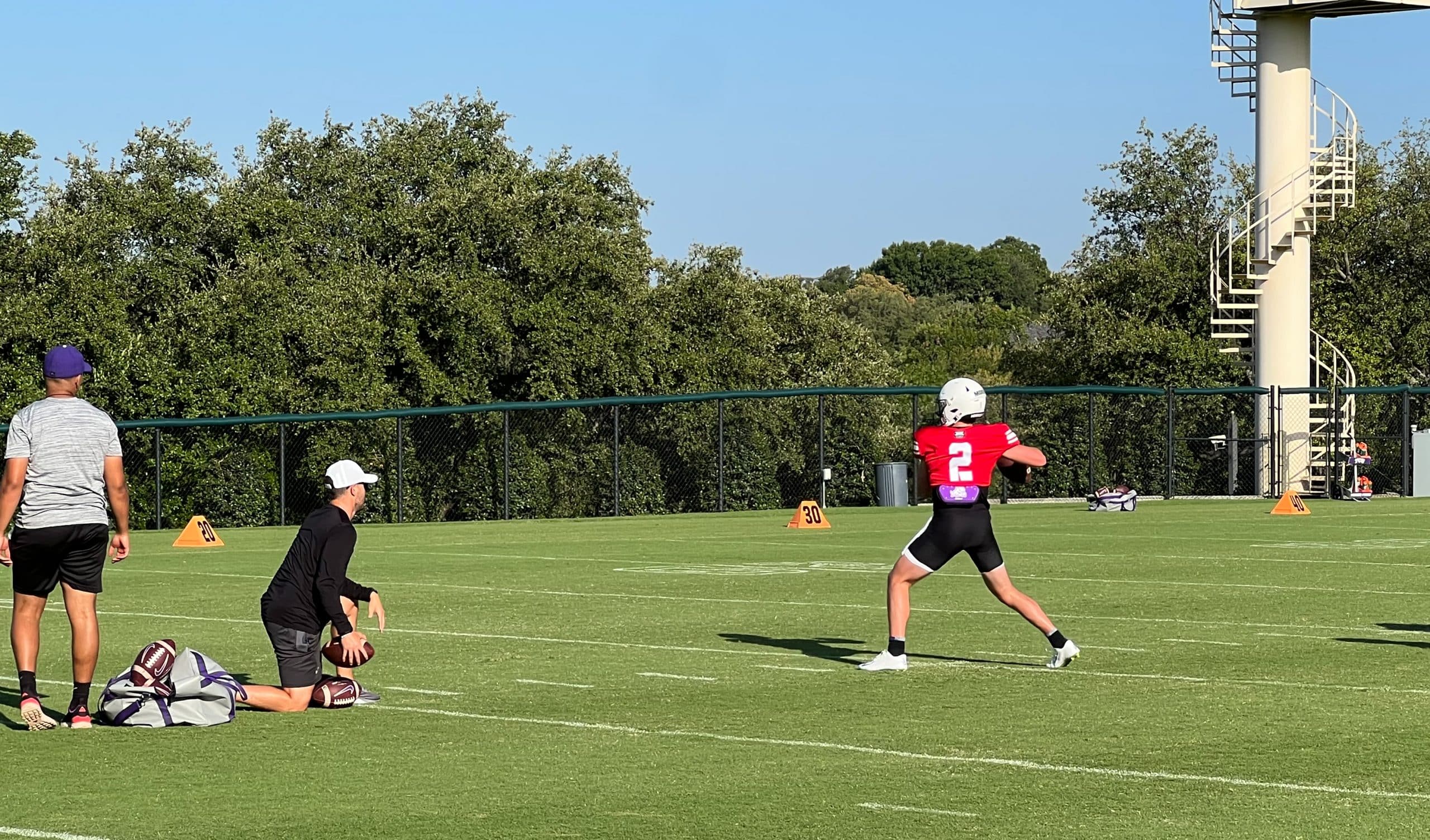 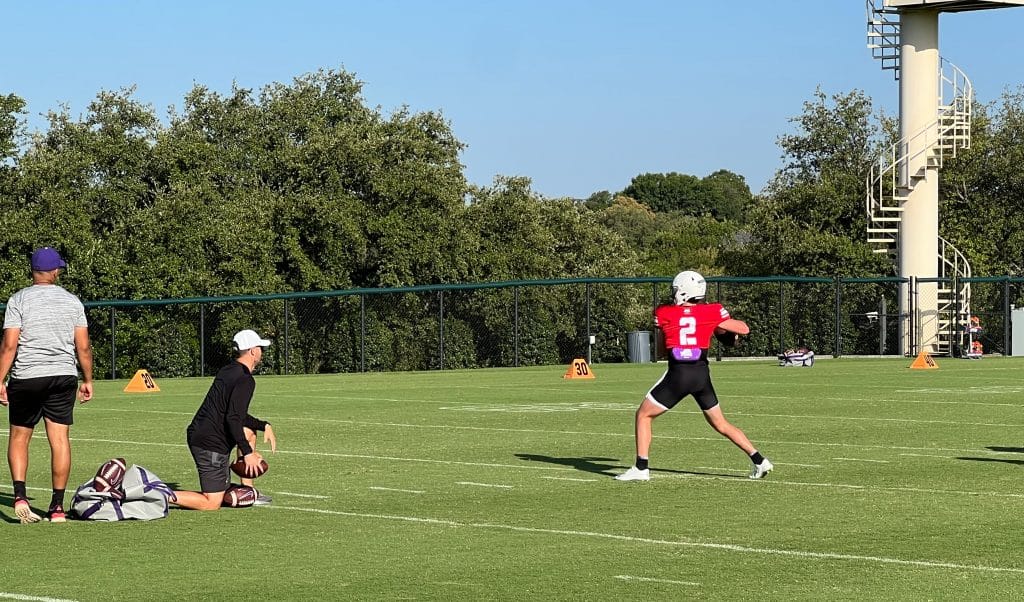 Chandler Morris remains in a competition with Max Duggan to be the starting quarterback, but both could play Sept. 2 against Colorado (Frogs Today/Jeff Wilson).

FORT WORTH — The latest from coach Sonny Dykes is that all three quarterbacks are going to play in the season opener at Colorado, even though the coaching staff is trending toward a QB who will likely take the initial snap Sept. 2 at Folsom Field.

That might be the only announcement Dykes is willing to make, by the way. As wide open to the media as Dykes has been, especially compared to former coach Gary Patterson, there’s still some gamesmanship at play here.

And there’s always the possibility that something goes haywire — injuries, COVID, food poisoning — in the practices leading to the first game of the Dykes era.

All that said, things seem to be pointing to Chandler Morris.

That’s not me making a judgment call. There are much keener observers of football at the Morris Practice Fields than this baseball writer, and they are darn near unanimous in believing that Morris has the edge in the competition over veteran Max Duggan and the intriguing Sam Jackson.

The good news for Frogs fans is that the media won’t be making the call. Dykes, who has coached up a pretty good roster of successful quarterbacks in his career, will be making the decision along with offensive coordinator/quarterbacks coach Garrett Riley.

Quarterback isn’t the only position that is up for grabs or has seen the pecking order change during fall camp. The depth chart will be put together by Wednesday, before the Frogs dive into game-planning for Colorado.

The coaches will have to do some massaging of the egos of those who land on the second team or the scout team, but the expectation is that as many as 60 players will see the field in the opener.

That might be the best development of fall camp.

The crew with Frogs Today Daily, presented by Dave’s Hot Chicken, has been setting up on the Schollmaier Arena concourse since Aug. 2. It’s been mostly quiet, but on Monday there were the unmistakable sounds of basketball revving up.

You guessed it: sneakers squeaking.

A few members of the women’s team were getting in some early-morning shooting. The men’s team was set to have a walk-through Monday before their first practice of the school year Tuesday.

• Mike Miles Jr., who opted to stay at TCU rather than enter the NBA Draft, “missed a lot of time this summer,” Dixon said. Miles still has room to improve, Dixon said, but lingering issues, including the wrists that were injured last season, kept Miles out of action.  “Availability is the best ability,” Dixon said. “It’s hard to get guys better when they aren’t practicing.”

• Eddie Lampkin Jr. also missed time over the summer. “That doesn’t help you,” Dixon said. “We’ve got to have him out there every day. He’s one of those guys that if he takes time off for whatever reason, he’s going to put on pounds.”

• Dixon said that another big man, Xavier Cork, was one of several players who had productive summers. He also mentioned that Damion Baugh focused on taking care of the ball and made strides there.

It goes without saying that you guys should keep watching Frogs Today Daily, which has only a few days left. Brian Estridge is still cranking out the weekly Frogs Today big show. Once football season starts, the Frogs Today lineup will look like this: Dissecting the Frogs with David Beaudin on Mondays, State of the Frogs with Sonny Dykes on Tuesdays, and 30-minute Frogs Today shows Wednesday-Friday.

As for what’s happening with TCU sports, well, things are cooking again.

Gross: One thing TCU football players are required to do after each practice is take a dip in cold tubs, just these big rubber tubs filled with ice water.

It’s part of taking care of their bodies, as the cold helps with inflammation and shocks the heat out of the body.

“I’m a big dude,” wide receiver Savion Williams said. “My body breaks down a lot, so I get down and get in there every day and take care of my body.”

But these are not individual tubs.

Sweaty player after sweaty player piles into the tubs like they’re at a public swimming pool. There are chemicals in the tubs to reduce bacteria, but, nevertheless, it disgusting.

The goal is to get in early and get out quickly.

“I’m kind of a germaphobe,” Morris said. “So, yeah, once I get off the practice field, I get my sprints in and I try and get in there as quick as I can. I don’t like to get in there with the O-line too much.” 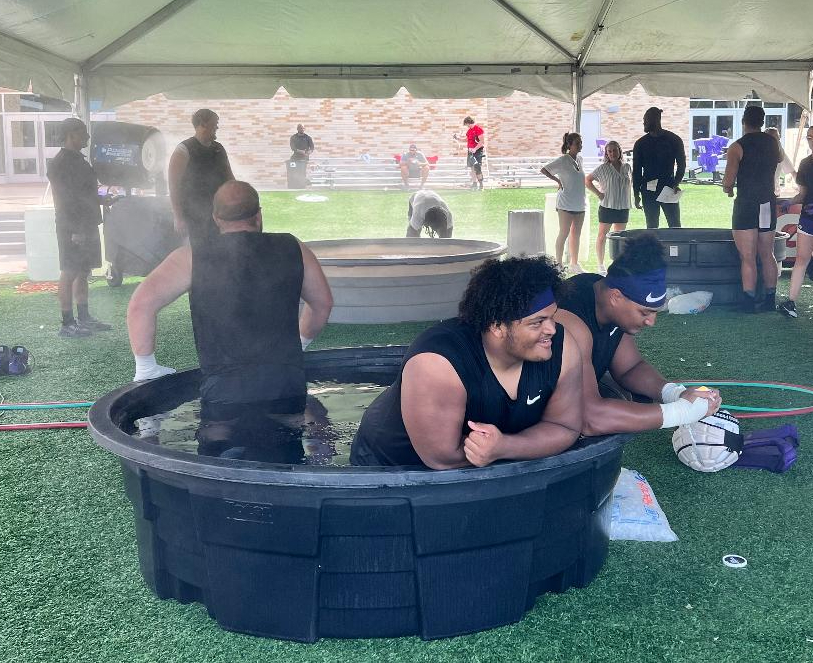 Great, A for effort, complete and total flop: Kids are great for moments like this.

Bad golf shots: Get up early, stand in line all day, and do this? This guy deserves a breakfast ball.