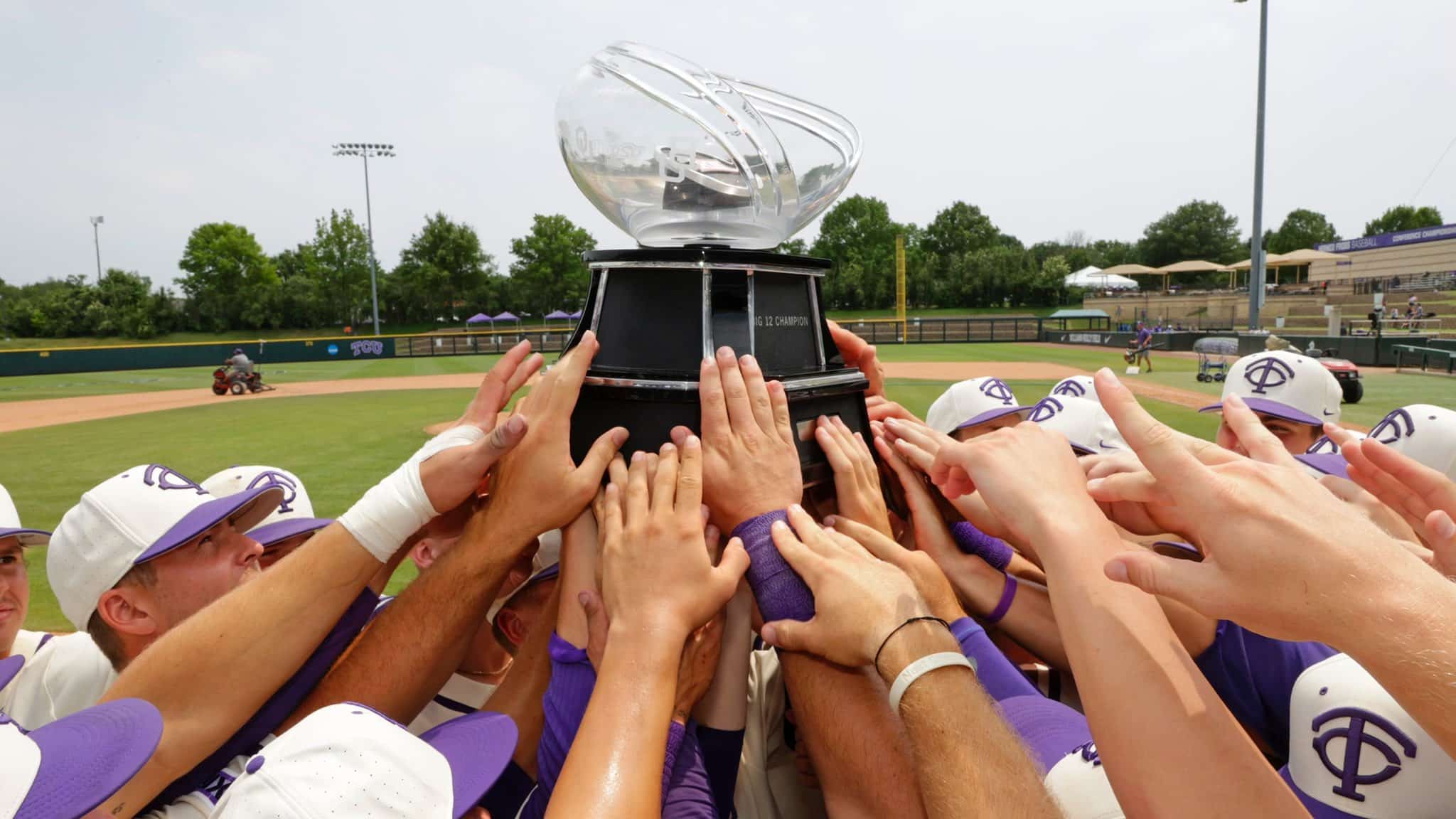 The 2022 regular season wasn’t the prettiest TCU has ever played, nor the most consistent.

Injuries hampered the starting rotation. Some dicey defense didn’t help. The Horned Frogs scored, as usual, but the bats seemed to go cold on occasion at inopportune times.

As recently as two weeks ago, the talk around the program was of disappointment.

Today, though, TCU is the Big 12 regular-season champion for the second straight season and on Wednesday will open the conference tournament as the No. 1 seed playing for the chance to host an NCAA regional.

The fact of the matter is that the Frogs know how to win. They have a track record of summoning their best baseball late in the season, and they could very well be playing their best now during a seven-game winning streak.

The competition hasn’t exactly been the ’27 Yankees. Incarnate Word, Kansas and Santa Clara are more like the ’21 Rangers.

But the Frogs didn’t play down to the level of that competition, which arguably they have done at times this year, and in the process saw things improve on the injury front as well as a few bats awakening just in time for the most important part of the season.

Now he needs to keep the train moving in the right direction. He doesn’t need to do anything different, and neither do the players.

They don’t need some writer to tell them that, though. The Frogs know how to win.

TCU headed to the National Championships last week in Champaign, Ill., as the No. 1 seed for a match against N0. 8 seed Kentucky in the Elite 8. The Frogs were three wins away from taking both the outdoor and indoor titles in the same year.

Kentucky, though, rallied to a narrow 4-3 win after TCU won the doubles point. The singles matches fell toward the Wildcats, and TCU was done earlier than they had expected.

“Full credit to Kentucky. They played unbelievably well,” coach David Roditi said. “At this level, in the NCAA quarterfinals, you have to play so well. We weren’t solid enough to get the win. We did a great job in doubles and 5 and 6, but it’s such a fine line between winning and losing at this level. That’s why winning a national championship is so special. You have to do so many things right for so many matches in a row, and we didn’t do that today.”

The loss, though, shouldn’t diminish one of the best seasons — if not the best — in program history, and three Frogs aren’t done.

Luc Fomba and Juan Carlos Aguilar, who dropped the deciding match vs. Kentucky in three sets, are in the singles field for the NCAA Individual National Championships, and Fomba and Jake Fearnley will open play Monday as the No. 1-seeded doubles team.

Former TCU golfer Tom Hoge finished tied for ninth Sunday in the PGA Championship in Tulsa, Okla., for his best finish in a major on the PGA Tour.

Hoge was one of only 12 golfers who finished under par, carding a 1-under 70 in the final round at Southern Hills Country Club to post a four-round score of 1-under 279.

He was four strokes behind winner Justin Thomas, who beat Will Zalatoris in a playoff.

Hoge’s top-10 finish added to his breakthrough season on the PGA Tour, which includes his first career victory in February at the AT&T Pebble Beach Pro-Am and $3,955,721 in earnings.

He will be in Fort Worth this week to play in the Charles Schwab Challenge at Colonial Country Club.

Most eyes will be on the baseball team, especially with the Frogs playing 20 minutes away in the wondeful air conditioning of Globe Life Field, but other sports are still competing at high levels of competition.

Track & field: at NCAA West Regional, Wednesday-Saturday, Fayetteville, Ark. Ten women and nine men are competing with a chance for the NCAA Championships next month.

Amazing video: A tornado certainly isn’t light. No one was laughing earlier this month in Andover, Kan., as an EF-3 tornado ripped through the town of only 14,000 east of Wichita. The good news is no serious injuries were reported.

This video, though, shows the destruction caused by the twister. Scary stuff, but I’m always mesmorized by the brute force of a tornado and can’t take my eyes off these kinds of videos.

Conway Twitty belted out some great country tunes during his career — personal favorite is Tight Fittin’ Jeans — but someone needed to step in and tell him to tone down his hair.

There are plenty of photos showing that his hair got taller and taller over the years, and then he went with the space helmet look. Take a look.

Bad golf shots: I really enjoy the slow-mo here. How hard is it to his fairway metal 8 feet?