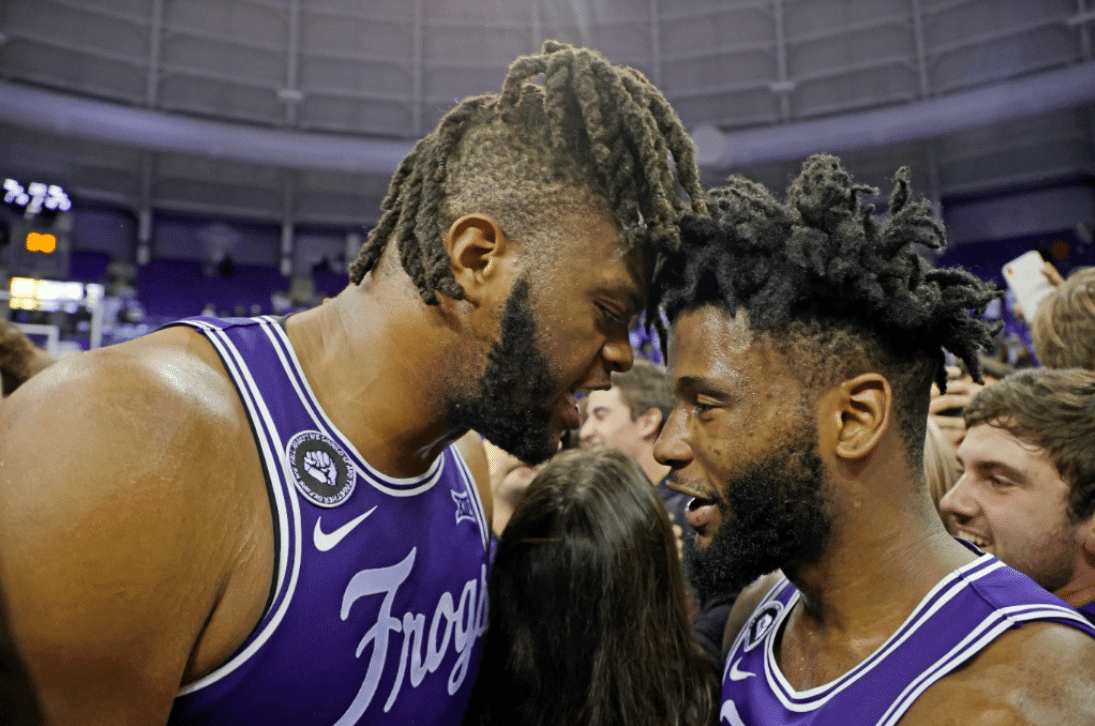 The Horned Frogs men took a big step forward this offseason when Eddie Lampkin Jr. did not enter the transfer portal and when Mike Miles Jr. announced last week he would not enter the NBA Draft (TCU athletics/Gregg Ellman).

FORT WORTH — Well, it looks like the TCU men’s basketball team has its hashtag and T-shirt motto all picked out for next season — #unfinishedbusiness.

That’s what Mike Miles Jr. said pulled him back to the Horned Frogs last week after what appeared to be a no-turning-back commitment to the NBA Draft. But it takes two to tango, and NBA teams might not have been as warm to Miles as he was to them.

So, he returns to the Frogs, where he was their best player en route to the second round of the NCAA Tournament and a controversial no-call against No. 1 Arizona that sent TCU home.

Center Eddie Lampkin Jr. also said he had unfinished business when saying he would not be entering the transfer portal. Chuck O’Bannon Jr. is also staying for his COVID season of eligibility.

The Frogs will be able to put their starting five on the floor from last season, assuming Damion Baugh is back. He declared his intention to explore the NBA Draft.

TCU has lost only Francisco Farabello from last season’s team. He entered the transfer portal and is off to Creighton, which makes sense with Miles’ return and a presumed healthy return of Shahada Wells from a knee injury.

The Frogs are also possibly in line for a reunion with Kendric Davis, the SMU guard who started his career at TCU and now is a graduate transfer looking for a place to play after coach Tim Jankovich left the Mustangs (or was pushed aside).

There is a need for a better 3-point shooter after a season in which the Frogs were one of the worst 3-point shooting teams in the Big 12.

Maybe the transfer portal will produce that player and help the Frogs with their #unfinishedbusiness.

Luke Savage pitched high-leverage innings in two games over the weekend as TCU got its season back on track against Texas Tech, but the sophomore left-hander still has life in the proper perspective as he continues to help kids in the Dominican Republic.

On the field, Savage closed out a 7-4 victory Friday that put the Frogs on the path to a weekend sweep of the country’s No. 4 team. TCU entered the weekend having lost 7 of 10 games, but arguably for the first time this season, all facets came together against the Red Raiders.

The sweep moved TCU into third place in the Big 12 standings at 24-12, 10-5, though tied with Texas Tech in the loss column.

It’s a relatively light week of home events, though a big one for tennis and football. Last week was plenty busy, and very successful. Men’s tennis, ranked No. 1 in the country, completed an defeated run through conference play; beach volleyball, ranked No. 2 in the country, had another perfect weekend ahead of the conference championships next week; and equestrian finished its season with loss of the semifinals of the national championships to top-seeded Oklahoma State.

Play-in champions: I’m not a particularly big fan of the NBA, though I am a big fan of the TNT studio show. The gang had some fun the how the Minnesota Timberwolves reacted after winning the play-in game into the playoffs as the No. 7 seed.

It was a fairly over-the-top celebration. There were tears shed and articles of clothing removed. Then again, the T’Wolves haven’t exactly been postseason regulars.

Nevertheless, Charles Barkley, Shaquille O’Neal and Kenny Smith had a good time with it.

Inside the NBA crew reacts to the Timberwolves' celebration after clinching the 7th seed. pic.twitter.com/kMkhQBhKkN

Who wants this job? 😂 pic.twitter.com/HU8gfbrEqv

Bad golf shots: This made me laugh. Enjoy.