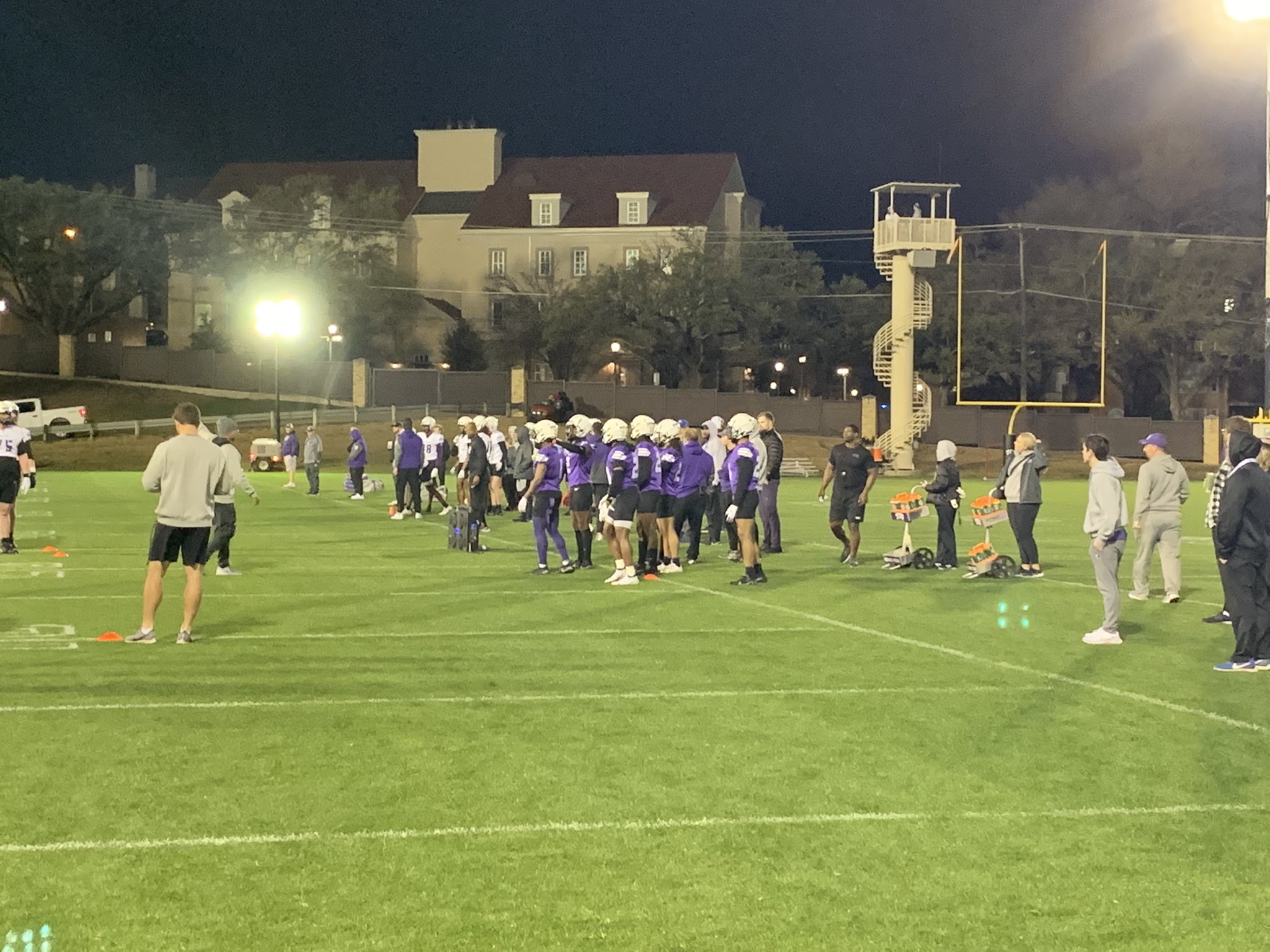 TCU spring practices during the week start before the sun comes up, and there’s some purpose behind that (Frogs Today/Jamie Plunkett).

FORT WORTH — The clocks probably looked really weird to scores of TCU football players when their alarms sounded at around 5 a.m. Tuesday for the first day of spring practices, especially if they went to bed when the clocks read 10 p.m., 11 p.m. or later.

The two practices during the week start at 6:45 a.m.

Part of the reason for the early start is spring classes were scheduled before Sonny Dykes was hired as coach. But from that scheduling conflict comes an opportunity for the coaching staff to evaluate players’ commitment.

Not only is it difficult to wake up, it’s difficult to perform. Those who can’t clear the crust from their eyes will stand out.

“The [three] most important abilities are dependability, availability and accountability,” Dykes said. “It’s a lot more important than how big or fast you are. It’s just, ‘Can we count on you?’ We want to make it hard on guys. It’s hard for me to get up. Any time there’s a 4 in front of that number, it’s hard to hard to wake up then.”

The early start also allows the players to put football behind them and focus on school the rest of the day. It also brings Ben Franklin into play — early to be and early to rise makes a player healthy, (potentially) wealthy and wise.

Practice are open to the public, as Dykes reminded the media Friday at TCU’s Pro Day. He said he wants the program to be as transparent as possible, which is a 180 from the previous regime.

Athletic director Jeremiah Donati won’t make a coaching change, though. Raegan Pebley will be back, but it took two meetings with Donati to ensure her return.

They initially met shortly after the regular season ended. Donati requested that Pebley create a plan showing how she planned to help TCU bounce back after their first back-to-back losing seasons since the late 1990s. The Frogs haven’t been to the NCAA Tournament since 2010.

Pebley will be entering her ninth season at TCU after replacing Jeff Mittie in 2014.

A light week this week, with Monday off and only four programs in action. That means there’s plenty of time to watch the second episode of the Frogs Today Show with Brian Estridge. Baseball and the unbeaten and No. 2-ranked beach volleyball team, though, play five times each.

Eddie’s world: Eddie Lampkin Jr. was already a big man on campus before the NCAA Tournament. Now that the Frogs’ season is over, the center has been even more visible. He was at a couple TCU baseball games, throwing out the first pitch Saturday, and also made an appearance Friday at TCU Pro Day and the Saturday practice.

On Wednesday, he stopped by the Roxo Media House studio for an appearance on the Frogs Today Show with Brian Estridge. View the episode on our YouTube channel and subscribe for free.

Lampkin also tweet that he has landed a crypto deal as part of being able to profit off his Name, Image, Likeness. That’s in addition to his Chicken Express deal. Lampkin is working with the Flying T Club on that end.

Brackets busted: How is your NCAA Tournament bracket doing with the field of 68 down to the Final Four — Kansas (Midwest No. 1), Villanova (South No. 2), Duke (West No. 2) and North Carolina (East No. 8)?

ESPN said that no perfect brackets were left after the second round. Some 17 million brackets were submitted. St. Peter’s, North Carolina, Richmond and Arkansas are mostly responsible for that, eliminating Kentucky, Baylor, Iowa and Gonzaga.

Not to brag here, but I picked three of the four, missing North Carolina. I had Purdue beating the Tar Heels. I have the lead in two contests and can finish no worse than second. If I do I should be able to buy an egg salad sandwich at Carshon’s. If I win both, new running shoes. My feet and checkbook are rooting for Duke.

Busted brackets mark another topsy-turvy NCAA Tournament that saw only a single No. 1 seed left even before the Elite Eight.

Bad golf shots: This one hurt, literally. Looks like he was hitting a wedge, too. Sheesh.