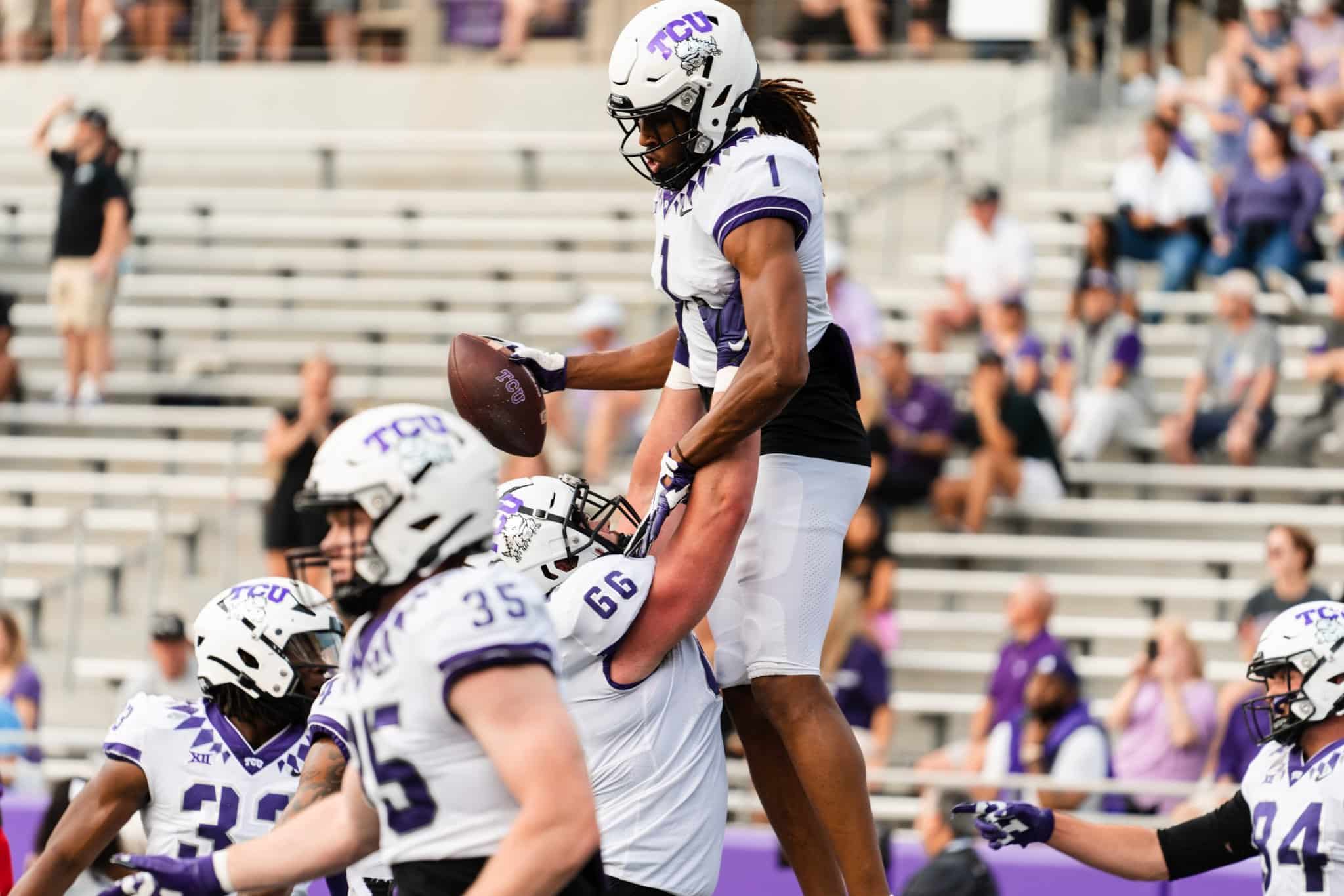 Frogs Today weekly newsletter: Spring game didn’t show much, but it was a show

Home » Frogs Today weekly newsletter: Spring game didn’t show much, but it was a show 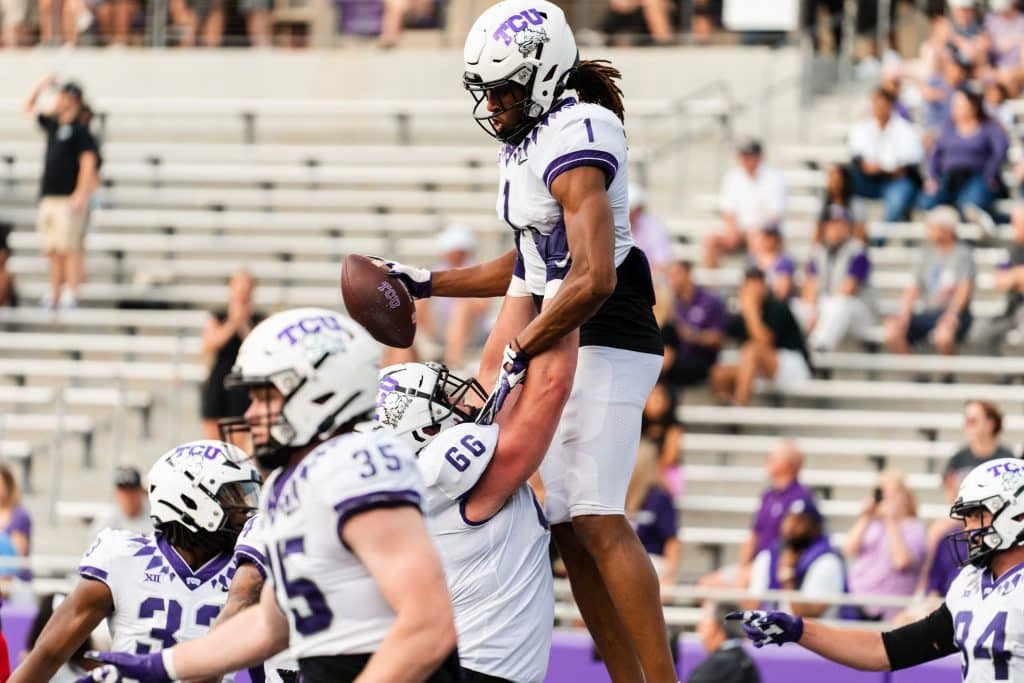 Quentin Johnston took a shovel pass from Max Duggan and raced into the end zone for a TD in the spring game (TCU football).

FORT WORTH — The Alabama spring game it was not.

ESPN isn’t going to slobber all over itself describing the scene, as it does for other programs.

But there was a vibe, and that was one of the goals all along.

Music played nonstop. The band and Showgirls and cheerleaders did their stuff.

Beers were only four bucks, and last season’s leftover hot dogs were only two.

The football lasted about an hour, and high winds disrupted some postgame plans.

It was also another step in coach Sonny Dykes’ campaign to make the Horned Frogs program an open book, or as open as a football coach can stand to make it.

The more people are talking about TCU football and how much fun the atmosphere is and how the new offense and defense look good, the more buzz that gets in put in recruits’ ears.

And, boy, there was no shortage of recruits on the sidelines. They might become Dykes’ most effective means of advertising. Dykes estimated that some 500 recruits have already been on campus since January.

The coaches will turn their attention to recruiting and the transfer portal now that spring practice has ended. They have to weed through which positions they believe must be addressed — though they knew that before the first snap Friday — and be targeted in who they pursue.

As Dykes said in December after the first signing period ended, he doesn’t just want a body to plug into the depth chart at a particular position. He wants upgrades.

The next couple weeks should be busy on that front. Friday was a busy recruiting day, too.

The recruits on the field saw a show. The spring game? Well, they saw that, too.

In the span of two weeks, TCU baseball has gone from leaking oil to the finest churning engine in the Big 12 Conference.

After dropping 7 of 10 games, the Frogs have won 6 of 7 and find themselves in a tie atop the conference standings following consecutive weekend series wins over the No. 4 and No. 3 teams in the country.

TCU went to Stillwater over the weekend and rebounded from a Friday whitewash to win the final two games over Oklahoma State. They were gutty victories, complete with enough starting pitching, solid relief work in the middle innings, timely hitting late and some bullpen maneuvering by coach Kirk Saarloos.

A team that looked like it would have to hustle just to be a No. 3 seed in an NCAA regional would now be in position to host a regional at Lupton Stadium should it repeat as regular-season champions or win the Big 12 tournament. Shoot, if they do both, as they did last season, don’t dismiss the idea of being national seed in the NCAA Tournament.

TCU has six conference games remaining, three at home vs. Oklahoma over Mother’s Day weekend and three May 13-15 at last-place Kansas.

That favorable remaining schedule should allow the Frogs to gain a high seed in the conference tournament May 25-29 at Globe Life Field, where they also have some semblance of a home-field advantage.

But the biggest advantage the Frogs have is the return of left-hander Austin Krob, who tossed two scoreless innings Sunday. He has time to get stretched out and possibly be a starter by the end of the season, but in the meantime he could be deployed as a multi-innings reliever who could protect a late lead.

How often would he be available to do that? Once a series? That’s fine. Saarloos could pick the ideal spot to use Krob, as he did Sunday.

It’s a heckuva luxury to be able to use Krob that way, now that the TCU ship has been righted, rather than possibly pushing for too much too soon as a starter.

Two weeks ago, the latter was probably under consideration, but the Frogs have resuscitated their season with consecutive series wins against the best in the Big 12.

This is a light week as regular seasons start to wind down for many spring sports. The baseball team will take a week off from conference play, but not from stiff competition.

Charge the mound!: The Phillies were trailing the Braves 14-3 in the eighth inning April 12, so in came utility man Dee Strange-Gordon to pitch. He was throwing, oh, about as hard as a 10-year-old and with roughly the same pinpoint control. Braves catcher Travis d’Arnaud took a “heater” to the shoulder, and the rest was gold.

Oddly, I did a search for baseball bloopers but the start of the Rangers’ season was deemed too long of a video. I kid. But that was a shameless way to bring up the Rangers and point everyone to RangersToday.com,  the leading source of Rangers news in Tarrant County. A paid subscription costs only $5.99 a month or $60 a year. If you’re Rangers fan, there isn’t a better, cheaper place to find Rangers coverage.

Anyhoo, back to d’Arnaud.

Baby goats are back: Look at this little son of a gun. Reminder: Baby goats are second in the Cute Twitter Animal rankings only to dogs.

You just never know what you'll find under your stove…😂😁🐐 pic.twitter.com/JExckurxwf

Bad golf shots: This is a couple years old, but it’s the first time I’ve seen it and it is amazing. Enjoy.