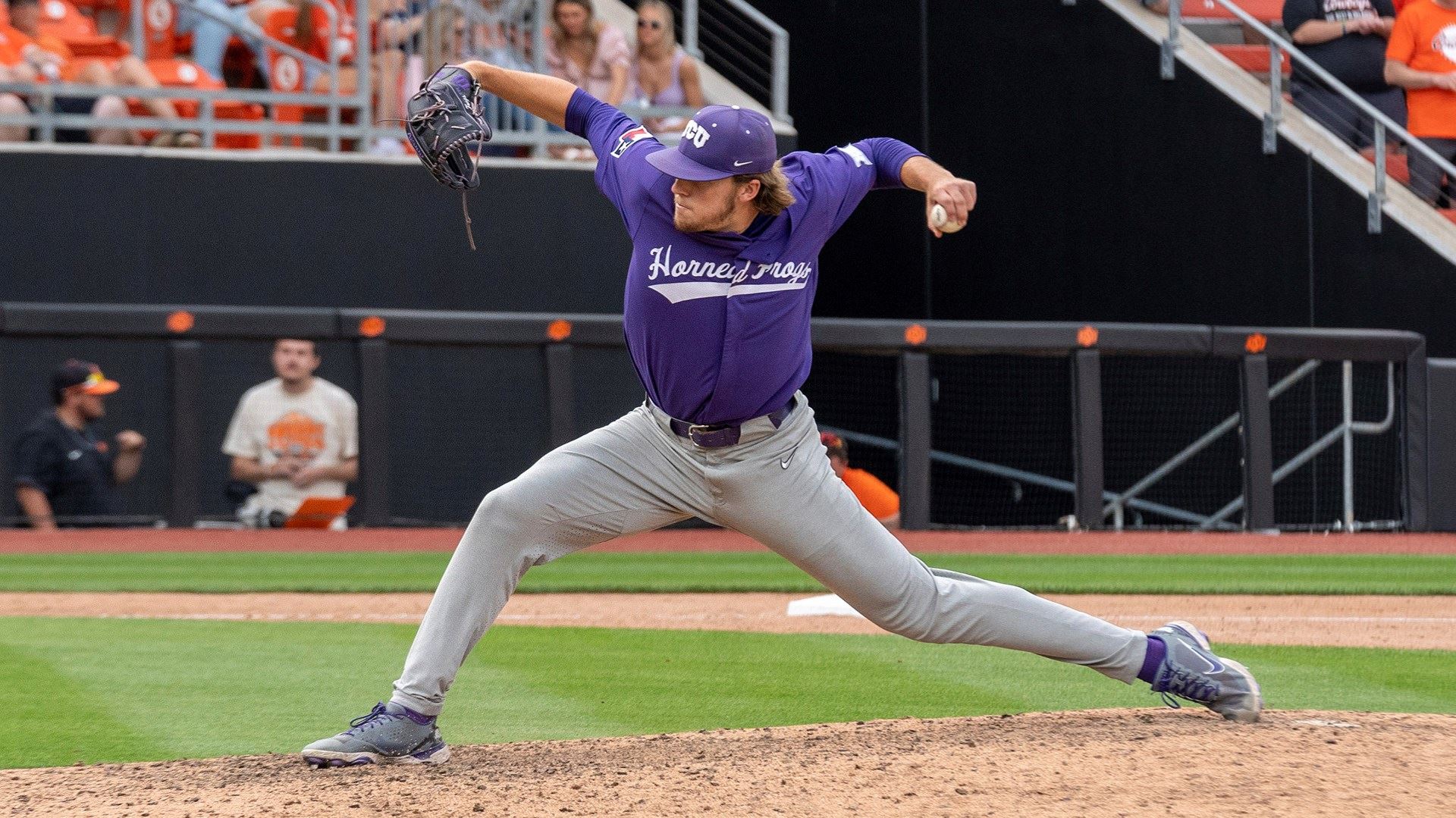 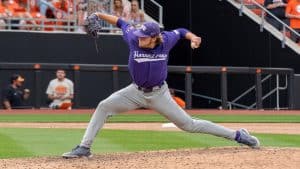 STILLWATER, Okla. – TCU took the series from No. 3 Oklahoma State with a back-and-forth 7-6 win on Sunday afternoon. Caleb Bolden earned his fourth win of the season in relief, while Garrett Wright notched his second save in as many days. The Frogs scored a run in each of the final four innings to build a lead, before holding on in the ninth to come away with the win.

David Bishop got the day off after taking a pitch on his left hand on Saturday. The freshman first baseman experienced tenderness in the hand during batting practice Sunday, so the coaching staff elected to rest him. Reed Spenrath got the start at first base, while Bobby Goodloe stepped in at designated hitter.

Oklahoma State took a 1-0 lead in the bottom of the second inning, when Ian Daugherty recorded his first RBI of the season with a two-out single.

TCU responded in the top of the third with a solid display of power. Sam Thompson led the inning off with his second home run of the season, a shot that completely cleared the stands in right field. After Elijah Nunez singled to left field, Tommy Sacco hit his eighth home run of the year, and second in as many days, to almost the exact same spot as Thompson.

Oklahoma State took the lead back and knocked Brett Walker out of the game in the fourth inning. After conceding four straight hits to start the inning, plating a run, Walker walked in the tying run.

With the bases loaded and no outs, Kirk Saarloos made a pitching change, calling on Augie Mihlbauer out of the bullpen. Mihlbauer indulged a 4-6-3 double play, which scored the go-ahead run for Oklahoma State, before getting another ground ball to Gray Rodgers to end the inning.

Mihlbauer gave way to Bolden with one out in the fifth, and the grad transfer from Arkansas pitched 1 1/3 innings of scoreless baseball, giving the Frogs an opportunity to come back.

The Frogs tied the game at four runs apiece in the top of the sixth, when Luke Boyers doubled down the right field line. Goodloe came around from first base to score, sliding in head first ahead of the tag at the plate.

Austin Krob made his first appearance for the Frogs since March 13th against Army, coming on in the bottom of the seventh in relief of Bolden. Krob retired the side in order, striking out Griffin Doersching to end the inning. Krob let out a scream as he ran off the mound, clearly excited to be back out there.

TCU added to their lead in the eighth inning thanks to their third home run of the day. This one came off the bat of Spenrath, who recorded his fourth home run of the season on a shot to right field to give TCU a 6-4 lead.

The most important insurance run of the day came in the ninth inning. Kurtis Byrne hit into a fielder’s choice, but advanced to second on an errant throw by the shortstop. Rodgers then singled up the middle, driving home Byrne and giving the Frogs a 7-4 lead.

The Frogs needed that run, as the bottom of the ninth inning was an adventure. Coming on to try and record his 11th save of the season, River Ridings hit the first batter he faced before giving up a double to right field. With runners on second and third and no outs, Ridings managed to get a ground ball to Rodgers for the first out.

A run came home to score on the out, cutting TCU’s lead to 7-5 and putting a runner on third base. For the second time in as many days, Kirk Saarloos pulled Ridings in favor of Garrett Wright.

Wright struck out the first batter he faced, and then induced a ground ball to Tommy Sacco. Sacco bobbled the ball and threw wide of first, extending the game and allowing another run to score.

Holding on to a one run lead, Saarloos journeyed back out to the mound to talk to Wright.

Wright struck out the next batter, hitting 98 miles per hour on the radar gun with his fastball, to clinch the game and the series for the Horned Frogs.

The Frogs now head home for a Tuesday matchup against Dallas Baptist, before once again hitting the road for a weekend series against Florida State.