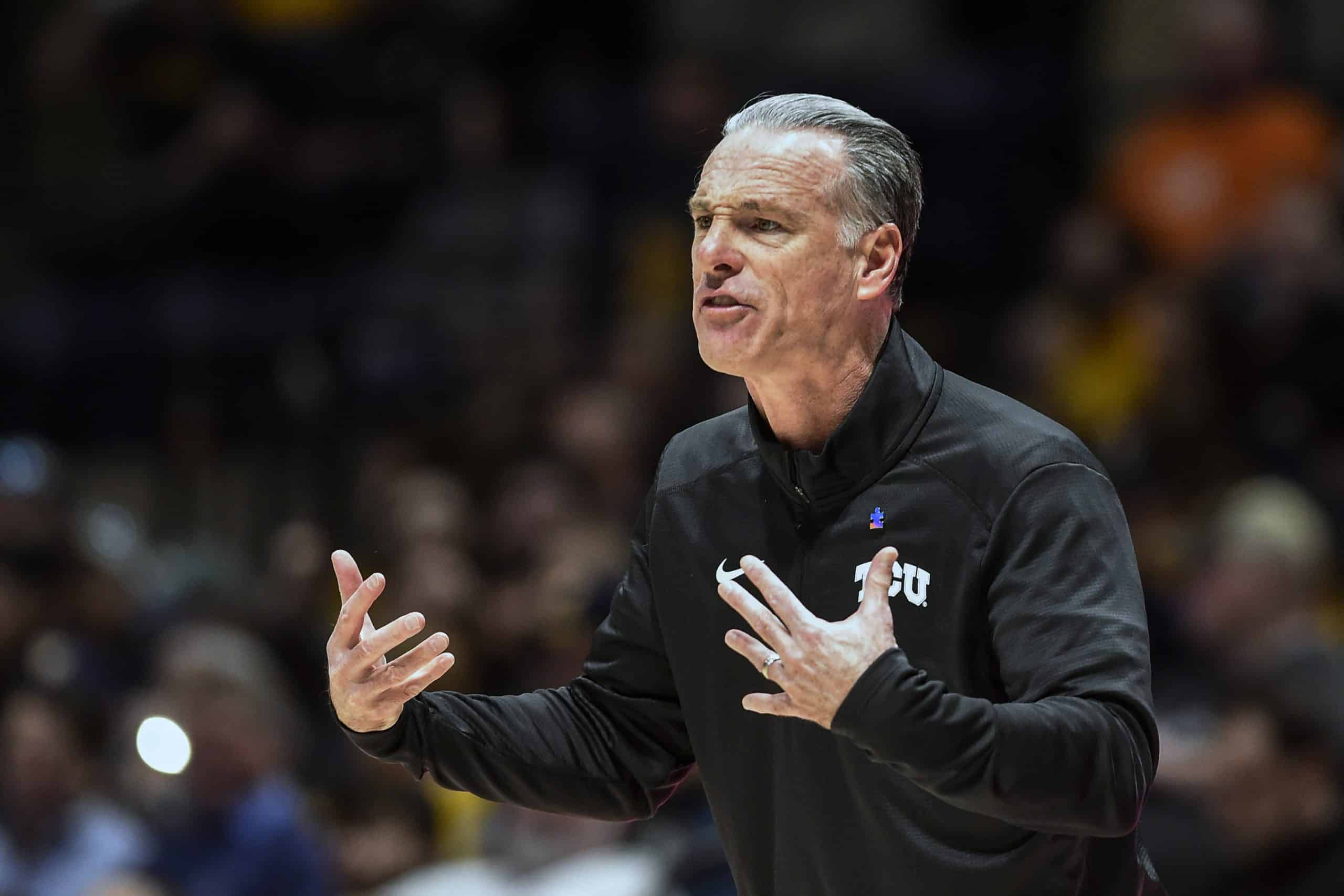 By Jeff WilsonApril 4, 2022No Comments 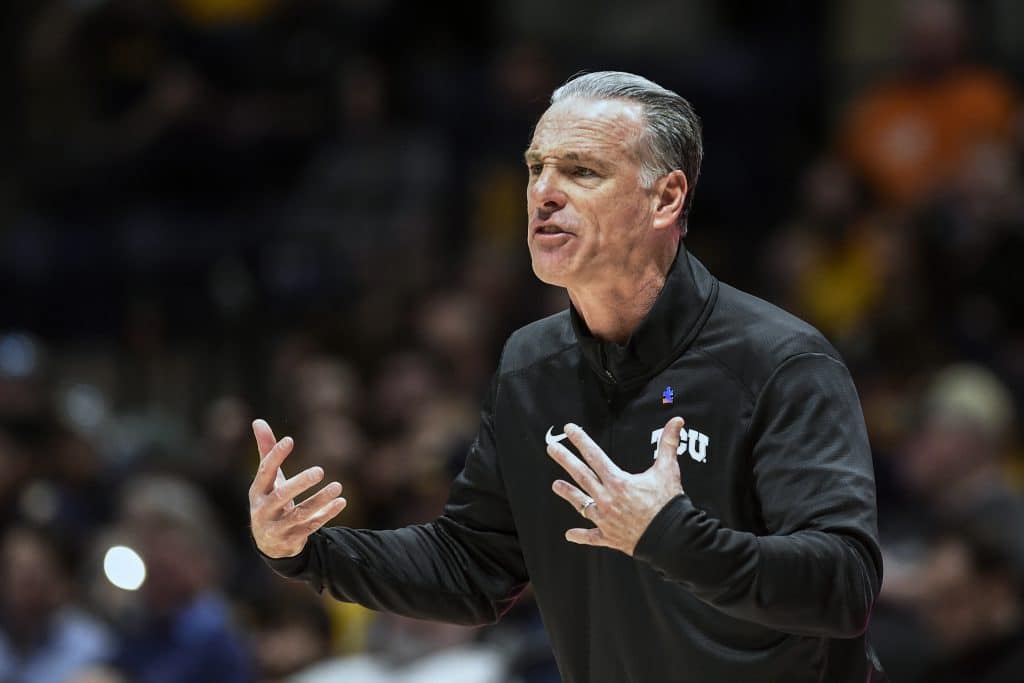 Jamie Dixon received a contract extension during a newsy week for the TCU men’s basketball team (The Associated Press/William Wotring).

SURPRISE, Ariz. — The TCU men’s basketball team had a topsy-turvy go at things last week, but ended it heading back in the right direction.

First up, the bad news: Sophomore guard Mike Miles Jr. declared for the NBA Draft with no intentions of just testing the waters. Miles was the Horned Frogs’ best player and helped lead them back to the NCAA Tournament, where a questionable call kept them from the first Sweet 16 in school history.

Francisco Farrabello won’t be Miles’ replacement after entering the transfer portal before Miles made his news.

Now for the good news: Coach Jamie Dixon had his contract extended through 2027-28, and so were the assistant coaches. Continuity with coaches staff will help in a sport in which there is very little continuity with players.

The Frogs could buck that trend, though, with the 10 other scholarship players expected to return. For now.

TCU has a commitment from Crosby guard PJ Haggerty, one of the top prep players in Texas. The Frogs are expected to dabble in the portal for a Miles replacement and a shooting guard.

But don’t sleep on Shahada Wells, who redshirted last season after transferring from UT Arlington. He has been a prolific scorer in high school, junior college and at UTA. At one point late in the season, Dixon said that Wells was making a case to be a starter before injuring his knee.

With what Dixon did last year in the portal and with his ability to get the team to quickly mesh and buy into the defense/rebounding-first mentality, the Frogs have a chance to improve next season even with Miles exiting.

For a guy who is touted as an offensive guru, TCU football coach Sonny Dykes spoke at length Saturday of the performance of multiple defensive players so far this spring.

Hodges and Williams are newcomers, but Hodges is a transfer from Navy. Williams is just a big pup, albeit a very large pup, as an early enrollee who was part of the December recruiting class.

“He’s 17 years old,” Dykes said. “He’s a big, strong guy that is very coachable and very conscientious. We had a sense of what we thought he could be, but you never really know. I think we all expected to see this.”

Dykes’ two focuses on offense are at quarterback and the offensive line. TCU has been moving offensive linemen to other positions, which Dykes views as one way to get the best players on the field.

Quarterbacks Max Duggan, Chandler Morris and Sam Jackson have impressed with their running ability, perhaps more so than Dykes and offensive coordinator Garrett Riley had seen on film.

The final version of this website, frogstoday.com, is live. That means we are requiring a subscription for most of our content, though the weekly newsletter will always be free.

Subscriptions are available monthly for $9.99 or annually for $99. That’s less than the legacy outlet in town that covers TCU, and Frogs Today offers a wider variety of content, covers more than just the revenue sports, and has the Lizard Lounge community with even more content and access to Brian Estridge and the rest of the staff.

While we’re talking about subscriptions, here’s one that doesn’t cost anything and should be worth a daily visit: the Frogs Today YouTube channel.

That’s where the weekly (and, eventually, daily) Frogs Today Show, hosted by Estridge, will be housed. Episodes can also be found at Frogs Today and directly below.

Most eyes will be on the baseball team as it tries to shake out of its funk. It won’t be easy, especially over the weekend. Considering I’m in Arizona, maybe I should go watch the men’s golf team. The soon-to-be-crowned No. 1 beach volleyball team goes back on the road this weekend.

$3.1 millon card: One of the few remaining Honus Wagner T-206 baseball cards, the most famous card in existence, sold at auction Thursday night for an eye-popping $3,136,500. This Wagner is a PSA 1, and the final price is a record for a card with just about the lowest grade possible.

This particular card has quite the backstory. It was once owned by actor Charlie Sheen, who loaned it to a New York restaurant in 1998. It was housed in an unsecured case, and four men attempted to steal it and replace it with a replica. Naturally, the plan was foiled.

The most expensive card ever sold is also a Wagner T-206 that fetched $6.6 million last year. It was graded a 3 by SGC.

The card is coveted because it is so rare. It was issued by the American Tobacco Company from 1909 to 1911, when Wagner demanded the company stop making them. Why he wanted the cards stopped is up for debate, either because he didn’t care for cigarettes or because he didn’t want people making money off his likeness.

College athletes would have his back on that theory.

The “All-Star Cafe” Honus Wagner, stolen from @charliesheen and recovered by the FBI in 1998 has been sold for $3.13 million in the @milehighcard auction.

This is … awkward: The Oakland A’s continued to dismantle their roster and payroll Sunday by trading left-handed pitcher Sean Manaea, who I’ve always thought isn’t as good as advertised, to the San Diego Padres.

And who did the A’s play Sunday afternoon? The Padres.

And who was the Padres’ starting pitcher? Manaea.