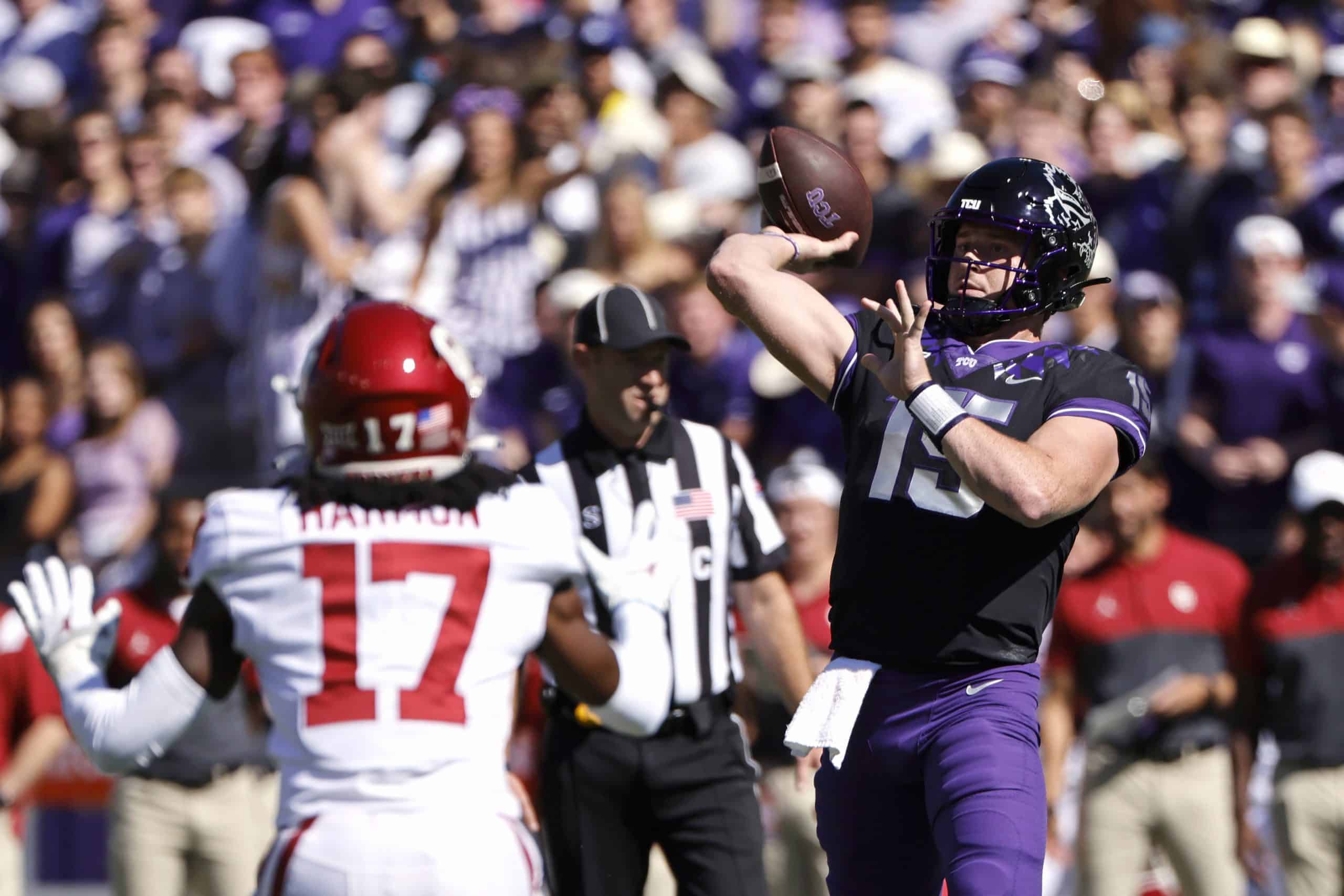 Frogs Today weekly newsletter: TCU must be wary of the aftershocks from destruction of Oklahoma

By Jeff WilsonOctober 3, 2022No Comments

Home » Frogs Today weekly newsletter: TCU must be wary of the aftershocks from destruction of Oklahoma 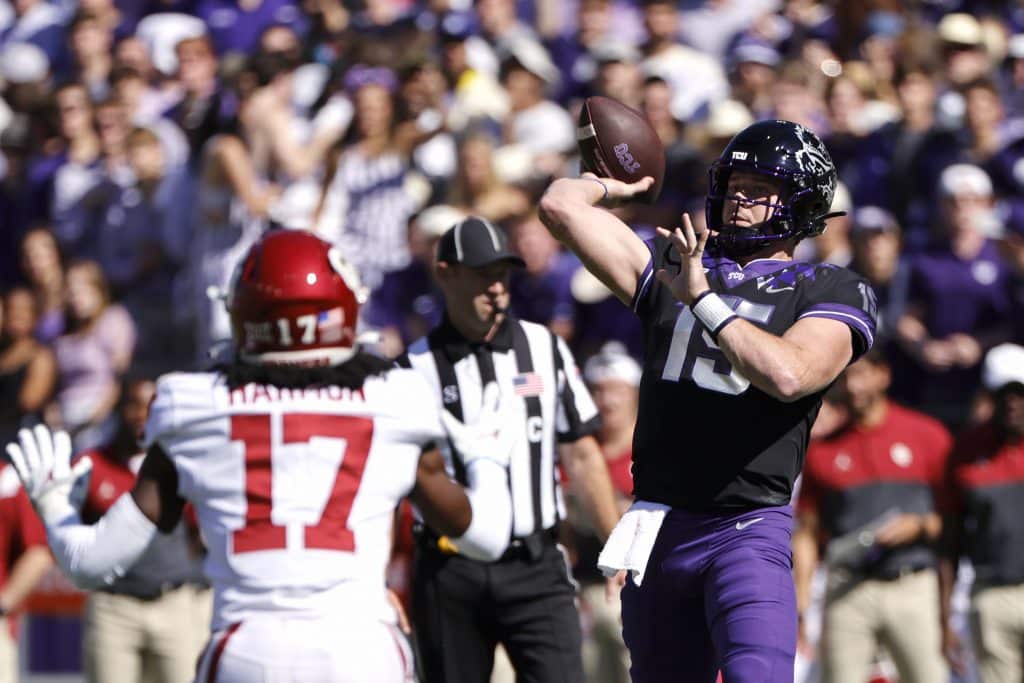 FORT WORTH — The aftershocks from the 55-24 rout of Oklahoma continued to be felt a few days after the eye-opening TCU triumph at Amon G. Carter Stadium.

The juiciest nugget is that ESPN College GameDay is headed to the Horned Frogs’ game this week at Kansas. The Jayhawks have done their part to bring attention to the game, but ESPN probably finds an SEC game to prop up if the Frogs don’t stick it to the Sooners.

The biggest news is that the Frogs have climbed back into the Associated Press top 25, at No. 17. It’s the first time TCU has been ranked since September 2019. Kansas also jumped into the poll at No. 19.

More news involves quarterback Max Duggan. He was selected as the Walter Camp National Player of the Week after carving up Oklahoma with his arm  (302 yards, three TDs) and his legs (116 yards, two TDs). The Big 12 recognized him as the conference’s Offensive Player of the Week.

A discussion was held late in the Oklahoma game among the Frogs Today staff and Jeremy Clark over at 247’s Horned Frogs Blitz. Another good week or two could have folks mentioning Duggan in Heisman Trophy talk. Seriously. He’s not there yet, though Kansas quarterback Jalon Daniels is getting mentioned. We’ll see about that after this week.

TCU has to avoid getting knocked down by the aftershocks. Just about everyone brought into the postgame interview room Saturday talked about the need to quickly put the Oklahoma rout behind them.

“We understand what we have in front of us is going to be a dogfight and just making sure that we do exactly what we’ve done for the first four weeks of preparing, of staying eyes down, nose down,” Duggan said. “You’re not worried about the outside world and just focus on us. Because once you start letting everybody tell you how good you are is usually when you get beat.”

Andy Dalton and Jake Arrieta highlighted the 2022 class of  TCU Athletics Hall of Fame, which was inducted Thursday night. Dalton was a little busy prepping for his Sunday start for the New Orleans Saints and couldn’t attend the ceremony hosted by the Block T Association.

The other seven new members did make it. Arrieta and fellow baseball inductee Bryan Holaday spent part of their afternoon at fall practice, where they addressed and advised players. That’s something Arrieta, the Cy Young-winning right-hander who retired before this season, wants to do more often now that he has more time on his hands.

But it’s not a ton of time, with two kids keeping him busy in the Austin area. They had him busy Thursday after leaving Lupton Stadium.

Somehow, his son didn’t have a belt and his daughter was in the midst of a makeup emergency. Arrieta swooped in, but didn’t have enough time to get back to the hotel to change into his formal attire.

So, he did it at the store where he bought his son’s belt.

Arrieta was the first inductee to sit down with master of ceremonies John Denton for a Q&A. Among those in the crowd was former TCU baseball coach Jim Schlossnagle, who found Arrieta and Holaday at junior colleges and wooed them to TCU.

However, the inductee who received the warmest applause was former associate athletic direct Jack Hesselbrock. As Denton mentioned, many in attendance were either kept eligible or guided back in the right direction by Hesselbrock, who spent more than 30 years in the athletic department administration.

Saturday worked out really well for the football team, which welcomed several recruits and commitments in for the thrashing of Oklahoma. The baseball team had many of the players in its upcoming recruiting class in town for the big game, too. They saw a TCU win unlike any other the past four seasons. It was a good day on offense and defense. Take a look at the links below, in case you missed it.

Monday Morning Quarterback: Frogs are back

State of the Frogs with Sonny Dykes: Breaking down SMU win

It’s a long wait until kickoff Saturday morning at Kansas. The good news is there is plenty on the TCU sports docket to keep fans dialed in. As always, don’t forget about Frogs Today TV, which brings unprecedented Frogs coverage Monday through Friday and on some Saturdays, too.

TCU or Aaron Judge?: Football fans across the country weren’t thrilled with the networks’ decision to show at-bats of Yankees outfielder Aaron Judge, as he attempted to hit his record 62nd homer of the season, during the telecast of their favorite teams’ games. That includes those watching the TCU-Oklahoma game.

Shortly after halftime, a joke started to circulate on Twitter:

Who will get to 62 first: Aaron Judge or TCU?

After Duggan’s second TD run made it 55-24, things got really interesting.

The Frogs, though, took their foot off the gas pedal and never threatened again. The Orioles, meanwhile, didn’t give Judge much to hit and he left Yankee Stadium stuck on 61. He’s at Globe Life Field for a season-ending four-game series against the Rangers.

History in Arlington not involving the Rangers, yet again.

Dogs 100, Cats 0: I say this even though the newest hound to our family is constantly bouncing off the walls.

And, to be honest, I don’t have a problem with cats — other than the fact that I’m terribly allergic to them and really shouldn’t touch them.

This is just funny and plays into the cat stereotype that they’re all a-holes.

Bad golf shots: Must have been a rough night. Also, if I’m in the crowd I’m out of there after the first one. Enjoy.