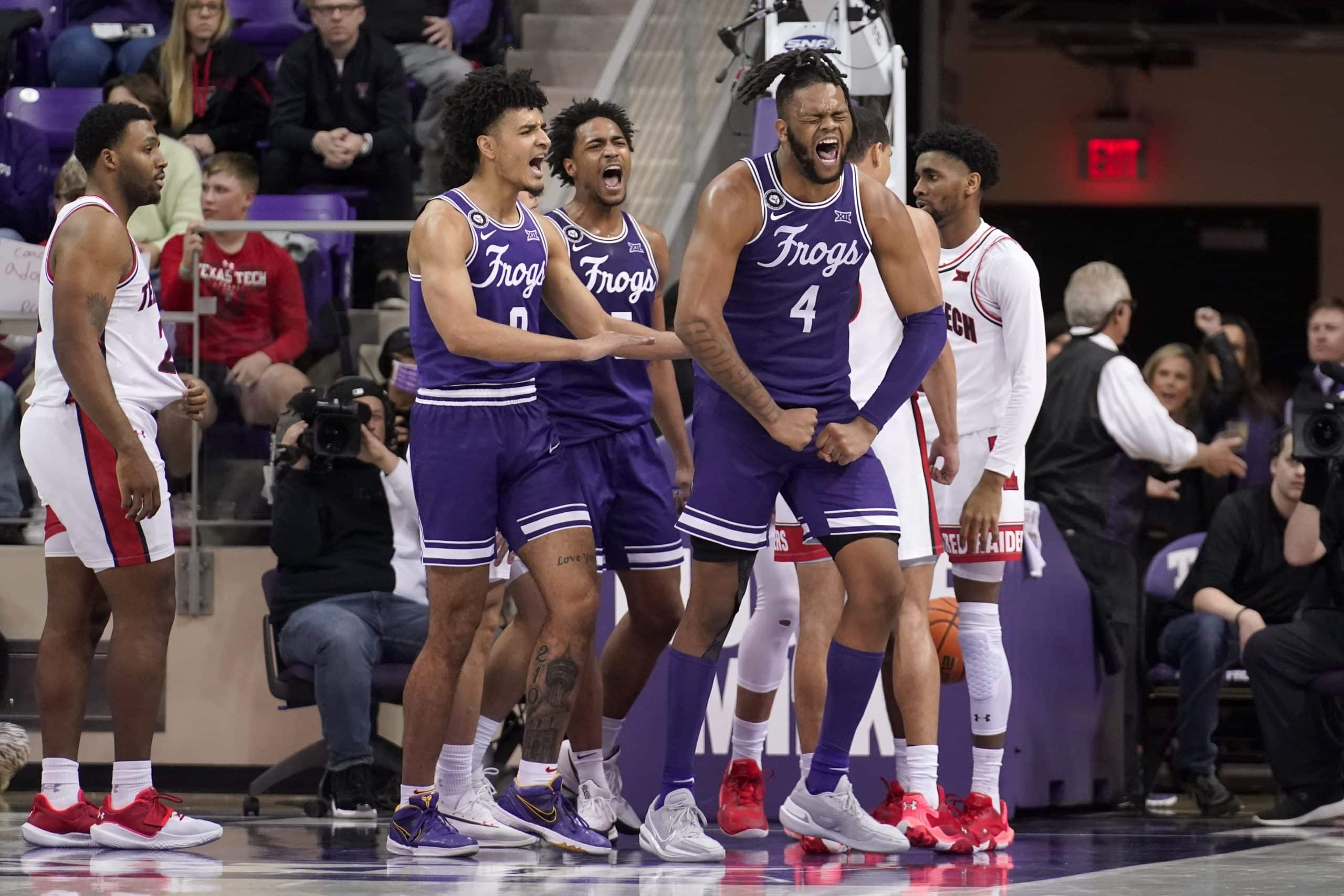 Frogs Today weekly newsletter: Will a banner season for TCU men catapult them to new heights?

Multiple top-25 upsets, 21 wins and the first NCAA Tournament win since 1987 are seasons for TCU to celebrate its 2021-22 season (The Associated Press/Tony Gutierrez).

SAN DIEGO — Amid the uproar of the no-call that helped put an end to TCU’s season came an outpouring of support for the Horned Frogs.

They should be proud of their performance Sunday in the second round of the NCAA Tournament, albeit in an 85-80 loss to top-seeded Arizona, and many took to social media to express just that.

It’s not much of a consolation prize, though, and does very little to soothe the sting the players and coaches were feeling back at their team hotel.

The Frogs were scheduled to depart for Fort Worth this morning, and eventually the time will arrive to discuss next season.

Every player who logged meaningful minutes this season can return. There are no guarantees in the age of the transfer portal that all 10 will, but a large nucleus should be intact when practices start in June.

Aside from any potential transfers, TCU might also be waiting to hear if Mike Miles Jr. plans to enter the NBA Draft. He probably shouldn’t. Maybe he can test the waters without hiring an agent and return if the waters are choppy.

But the players often talk about how well they get along and how strong the chemistry is. Coach Jamie Dixon said he has seen it since last summer.

“They became a team, a unit that was unbelievably close,” Dixon said. “They do everything together, and it’s just a fun team to be around.”

Assume that Miles does return, and add in guards Shadada Wells and Maxwell Evans coming off of injury-related redshirt seasons, and TCU could be one of the best teams in the Big 12.

The Frogs will be older and more seasoned, have more depth, and have the chance to get better in the offseason. There’s something to be said for continuity in a sport that is seriously lacking in it..

Once the hurt from Sunday wears off, the drive to do more next season should motivate the Frogs to stay together.

For those of you who might have missed it, the long-awaited Frogs Today show with Brian Estridge launched Thursday afternoon on our YouTube channel.

Another episode will be filmed this week.

Also new at Frogs Today, we have opened our Lizard Lounge community and are now requiring subscriptions for much of our content.

This newsletter will always be free to all readers. Other items, like my column Sunday night from San Diego, are considered premium content.

If you’re a TCU fan, you will want to be a part of this community. Check us out.

One sport may have ended, but the spring sports are getting after it. Seven of them are in action this week. Follow along, or, better yet, show up and support them. The men’s tennis match Friday should be a doozy.

Indiana’s one shining moment: The first-round game between Saint Mary’s and Indiana was not good, at least not for the Hoosiers. In fact, their lone highlight happened on the sidelines following a shot that bounded off the back of the rim, went over the backboard, and got stuck between some support bars.

Officials were unable to get the ball down by themselves, even when jamming a broom handle at the ball. So, Indiana cheerleader Nathan Paris hoisted Cassidy Cerney above his shoulders, and she reached up and freed the ball.

The Hoosiers, who lost 82-53, probably wish she hadn’t freed it.

This Indiana cheerleader is a legend for this 😭 pic.twitter.com/qP3X5ZHBex

Controversy in the water: Frogs Today tries to stay away from anything controversial — and what follows certainly isn’t funny — but this is an issue that could come to a head. Some NCAA women’s swimmers have come forward in opposition to Lia Thomas, the first transgender athlete to win a national title. She won the 500 freestyle by less than a second.

One swimmer saw her career finish after finishing 17th in qualifying, denying her a spot to advance to the finals. The swimmer who finished ninth, the first spot out of the finals, was denied All-America recognition. The second- and third-place finishers posed for a photo with the fourth-place swimmer as recognition of what the podium would/should have looked like.

The swimmer who finished 17th, Reka Gyorgy of Virginia Tech, wrote to the NCAA claiming it is wrong to allow swimmers born as biological males to compete with biological women.

Bad golf shots: This was his breaking point on what surely, judging by the swing, was an already lousy round.