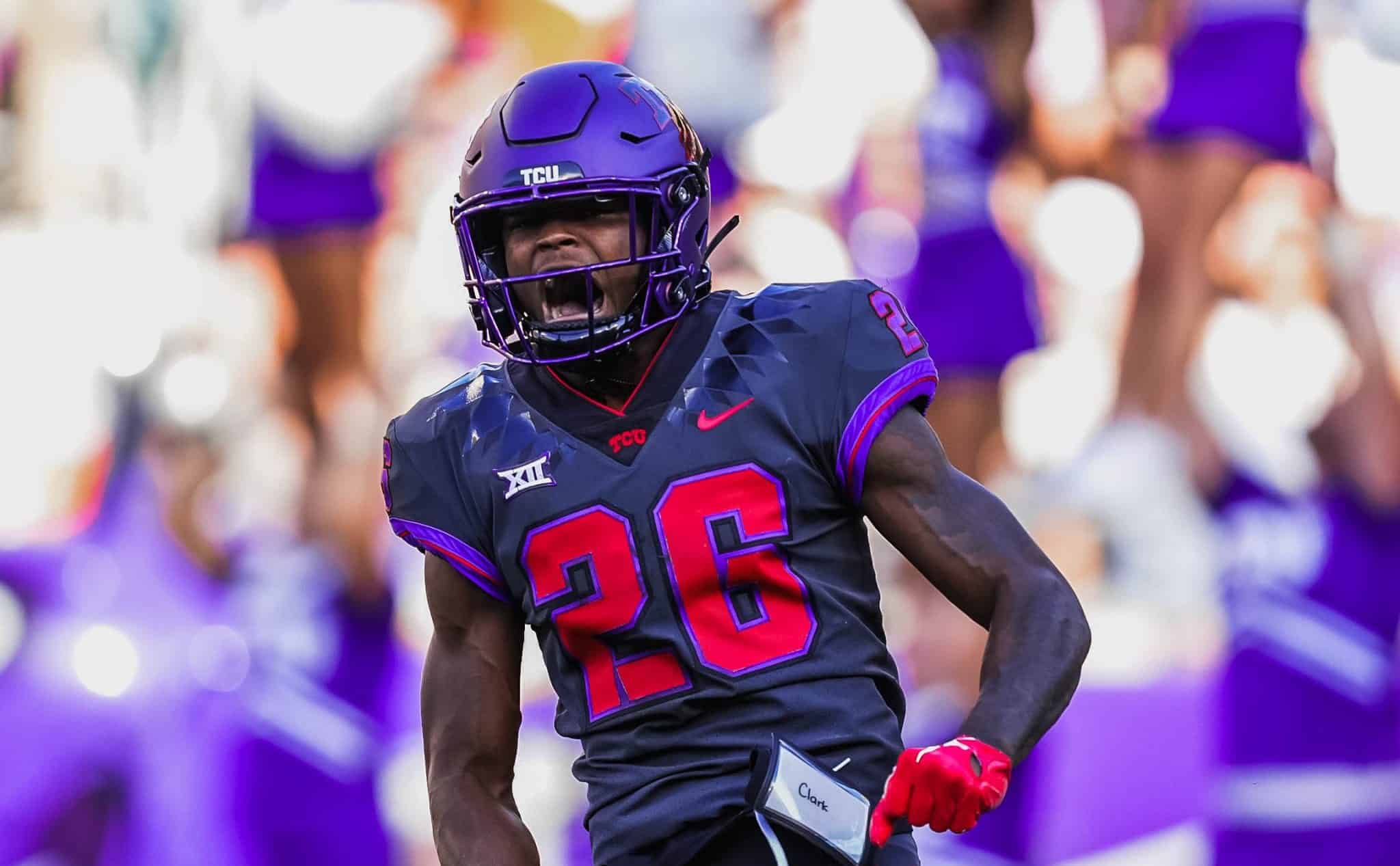 By Jamie PlunkettOctober 15, 2022No Comments

FORT WORTH – TCU came from 24-7 down to upset No. 8 Oklahoma State on Saturday afternoon, in front of a sold out crowd at Amon G. Carter Stadium.

TCU dug a hole for themselves early, falling down 14-0 before they could get things rolling on offense.

For the first time this season, TCU didn’t score the first touchdown of the game. After a quick three-and-out for the Frogs’ offense, Spencer Sanders and Oklahoma State marched down the field, using a little bit of trickery to get into scoring position.

A double reverse flea flicker created confusion in TCU’s secondary, allowing tight end Braden Cassity to get open for a 38 yard gain. Two plays later, Sanders kept it himself and scampered 29 yards for the opening score.

Sanders kept it on Oklahoma State’s next drive too, rushing in from eight yards out after the Cowboys had marched down the field.

Safety Millard Bradford’s absence was noticeable for TCU’s secondary. Not only is he the longest tenured started of the safeties group, but he’s also typically the one that gets the play call in from the coaching staff and distributes it to the rest of the secondary.

After two punts on their first two possessions, TCU’s offense got rolling. Strong runs from Kendre Miller and Emari Demercado put the Frogs across the 50, where Max Duggan found Quentin Johnston for a 48 yard gain, down to Oklahoma State’s one yard line. Two plays later, Duggan kept it himself and dove in the endzone for a touchdown.

The defense stepped up following the Frogs’ first touchdown of the game, forcing a three-and-out and seemingly shifting the momentum. Oklahoma State grabbed the momentum right back when they recovered a Derius Davis muffed punt and extended their lead to 17-7 with a field goal.

Oklahoma State continued to add to their lead as the second quarter got underway. After a TCU penalty on an Oklahoma State punt return put the Cowboys in TCU territory, Sanders marched the offense down the field and connected with John Paul Richardson for a 22-yard touchdown pass. The score came with 10:04 remaining in the second quarter.

It was the last touchdown either team scored for a long time.

The Cowboys, leading 24-7 at that point, seemed content to run the ball, drain the clock, and trust their defense.

What ensued were more than 30 minutes of game time where both teams traded field goals, after which the Cowboys led 30-16.

The streak of field goals was finally broken by the Frogs with 9:22 remaining in the contest. After Duggan and the Frogs marched down the field for a first and goal, Kendre Miller punched it in from two yards out to bring the Frogs within one score, 30-23.

TCU’s defense took that momentum and ran with it, forcing Oklahoma State’s first turnover of the day on the following Cowboys possession. Sanders dropped back to pass, looking downfield, but under threw his receiver. Safety Bud Clark made the most of the opportunity, intercepting the ball.

The Frogs would punt on the ensuing drive, but TCU’s defense once again came up big. The Frogs forced a three-and-out, getting the ball back on their own 6 yard line with just over five minutes of game time remaining.

Eight plays and 94 yards later, a little trickeration put the ball in the endzone for the Frogs. From 10 yards out, TCU ran a direct snap play to Demercado. He handed the ball to Duggan, who then threw it out in the flat to Jared Wiley. Wiley did the rest, plowing forward across the goal line for a touchdown, tying the game at 30 apiece.

Neither team could muster enough offense on their final drives to put the game away, so instead we headed to overtime. It was the first overtime game for TCU since 2019, a three overtime, 29-23 loss to Baylor.

TCU opened on offense in the first overtime, and Duggan found Johnston from 25 yards out to put TCU up 37-30. Oklahoma State battled back, converting on a 4th and 9 before scoring from one yard out to even the game at 37.

TCU elected to start on defense for the second overtime and managed to hold the Cowboys to a field goal, which put Oklahoma State up 40-37.

TCU committed to the ground game, using Miller to pound the ball inside the Oklahoma State 12. From there, Duggan kept it and took it all the way down to the one. Kendre Miller ended it with a touchdown run.