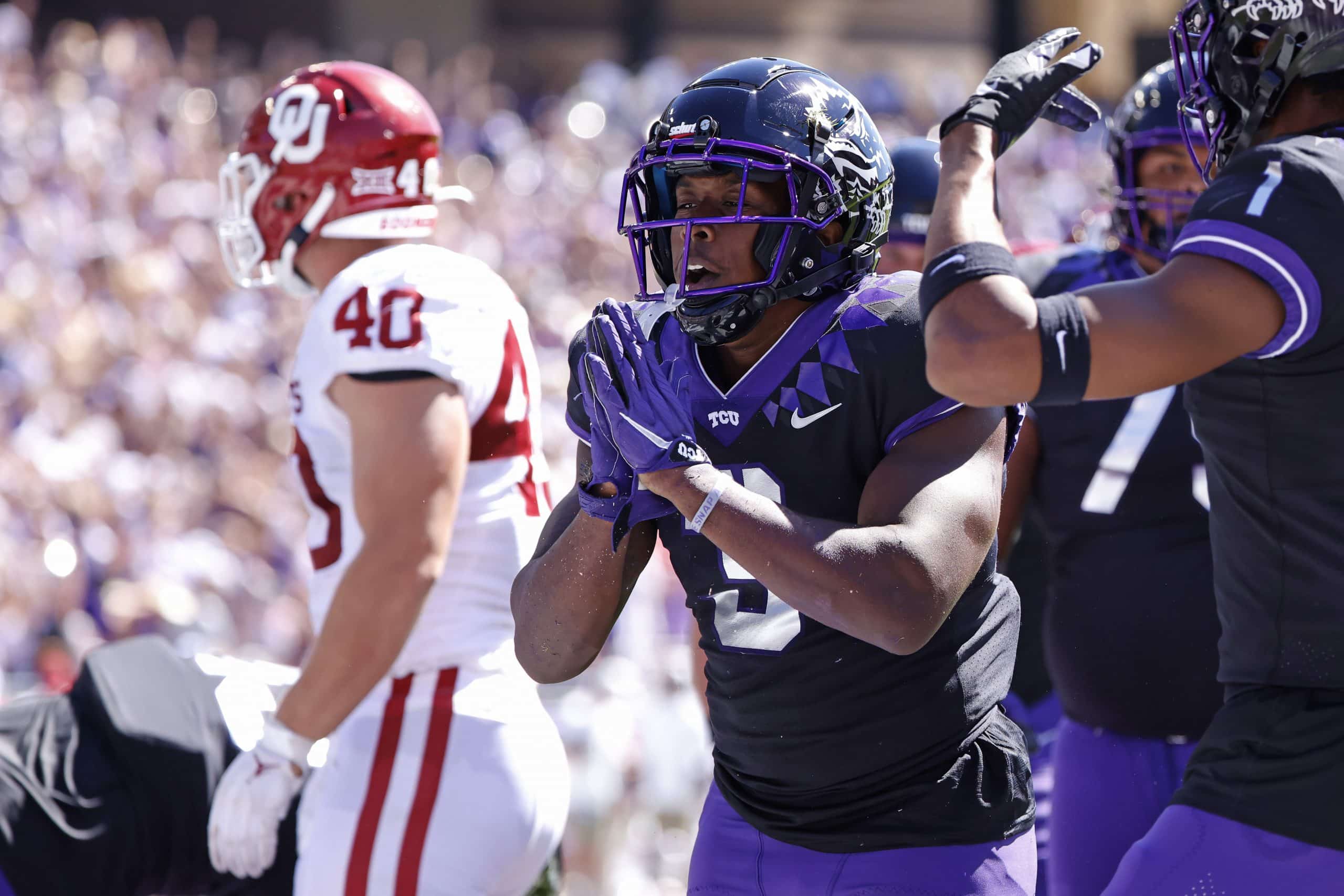 By Melissa TriebwasserOctober 15, 2022No Comments

Emari Demarcado has been part of a TCU offense that leads the country in yards per play (The Associated Press/Ron Jenkins).

FORT WORTH — Thanks to the Big 12 TV partners for giving us our mornings back.

After three straight 11 a.m. kicks, TCU and Oklahoma State and their fans got to sleep in a little. Today’s 2:30 p.m. game at Amon G. Carter Stadium was deemed worthy enough of a later time slot, and the ABC broadcast crew is actually recognizable.

That’s what winning does for a team, and the Horned Frogs are winning.

So is Oklahoma State, who enters ranked No. 8 with a matching 5-0 record. TCU is ranked 13th and is favored by the guys in Las Vegas.

Who does the Frogs Today staff favor? Here are our predictions:

Melissa Triebwasser: TCU returns to the friendly confines this weekend after braving the GameDay atmosphere at Kansas and coming out victorious. In front of a sold out Amon G Carter Stadium, the Frogs will be looking to take advantage of a vulnerable Oklahoma State secondary and put up points early and often.

But the Cowsboys’ defensive line is the best TCU has seen thus far, and may well be a top-10 unit in the country. Protecting quarterback Max Duggan, something that has been an issue this season, is priority one when the Frogs have the ball. On the other side, Oklahoma State is thriving behind a more mature Spencer Sanders at quarterback, but is lacking in the run game. Containing the explosive Sanders in both the pass and quarterback run game will go a long way toward getting stops on defense for TCU.

I’m absolutely terrified of the Cowboys’ defensive front, and TCU is 2-0 in games I’ve picked against them. Oklahoma State 42, TCU 38.

David Beaudin: TCU has beaten two … umm, one (sorry, SMU) quality opponent this year, with the victory last week at Kansas. While you can’t hold that against the Frogs, this Oklahoma State team is on a different level than the previous five on the schedule.

The experienced and older (average age is 24) defensive line creates problems for any offensive line, as the linemen are big strong, and use their hands really well in pass rush.  This is particularly true for the interior of that defensive front.

New-to-Oklahoma State defensive coordinator Derek Mason will play a lot more man coverage than we have seen from the Cowboys in the past.  He utilizes man-free coverage most often, playing man underneath and protecting against the post with their free safety.  However, this still leaves their cornerbacks vulnerable in one-on-one on the outside.

We all know the talent TCU has on the outside at receive,r and this is certainly an area Frogs offensive coordinator Garrett Riley will look to exploit, taking shots down the field on the perimeter.  I think the Horned Frogs will connect on some of these to survive and remain unbeaten. TCU 38, Oklahoma State 31.

Jamie Plunkett: Is this the biggest game at Amon G. Carter since 2015? Definitely. Oklahoma State is the best team TCU has seen to this point in the season. It’s also possible that the Cowboys are the best team the Frogs will see all year.

As Beaudin mentioned above, Oklahoma State’s defensive front is tough, experienced and extremely capable. But how do you counter that? With a big, tough, mobile quarterback.

Max Duggan has inserted himself ever so peripherally in the Heisman conversation through five games. Today, he cements himself squarely in the middle of it.

Duggan and TCU have the most explosive offense in the Big 12, and the Frogs lead the country in yards per play. Oklahoma State’s secondary is average at best, and they’ll be missing at least one starter for the first half. That will be enough for TCU to get a lead and stay ahead for the rest of the game. TCU 42, Oklahoma State 38.

Jeff Wilson: The safest bet in college football this week is the over today at Amon G. Carter Stadium. Both defenses have been porous, and Kansas might have given other clubs the formula for solving the TCU defense. Lots of motion seemed to confuse the Frogs, who were outgained last week but benefited from two turnovers, a fourth-down stop and a missed field-goal try.

But the offense continued to churn out big plays, and TCU survived on the road (and covered). Oklahoma State’s grown-a— men on the defensive line will be a problem, so quarterback Max Duggan will need to get rid of the ball quickly and accurately against a Cowboys defense that was on the field for more than 100 plays last weekend.

TCU’s offense will be the difference here, especially if Quentin Johnston exploits the man coverage he is likely to face. TCU 48, Oklahoma State 41.