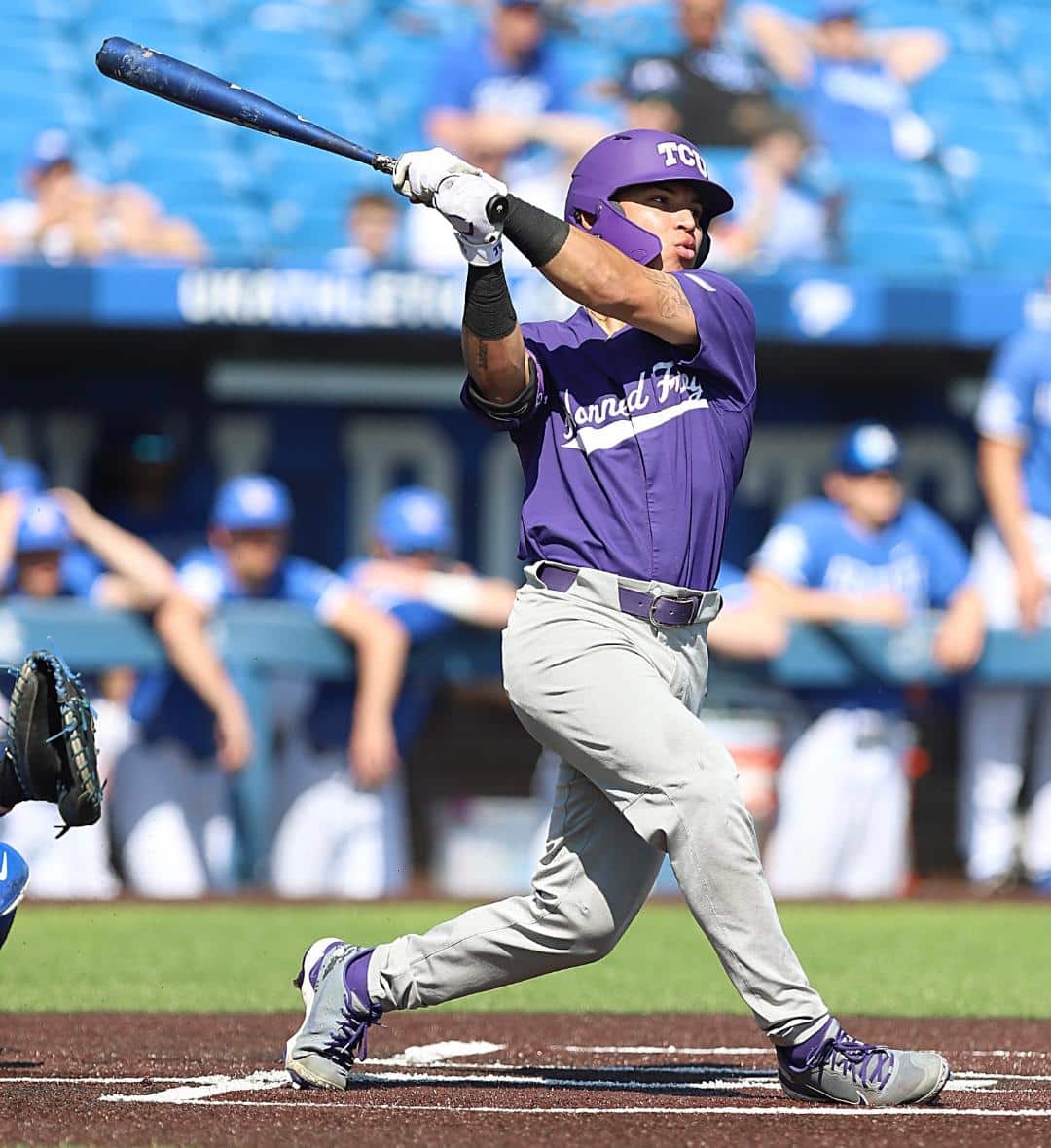 By Jeff WilsonMarch 8, 2022No Comments

Elijah Nunez stayed hot at the plate for TCU, but the Frogs couldn’t climb out of a 9-0 hole Tuesday at Louisville (TCU Athletics).

Every baseball game is unique, and that’s one of the beauties of the fledgling national pastime.

But one thing about the game doesn’t change: It’s hard to win when you spot your opponent a nine-run lead.

That was the case Tuesday for TCU, which scored four runs in the seventh and eighth innings but couldn’t break through again in the ninth in a 9-8 loss to Louisville  at Patterson Stadium.

The loss was the Horned Frogs’ third on the four-game road trip to Kentucky. They lost 2 of 3 to Kentucky over the weekend.

In a game that ultimately came down the bullpens, TCU relievers allowed six runs in the fifth and sixth innings behind starter Cam Brown, and Louisville had just enough arms left to stop the Frogs’ late rally.

Brown wasn’t great but wasn’t terrible over four innings, allowing three runs. But he threw 80 pitches and had some stressful innings, so coach Kirk Saarloos went to the bullpen to start the fifth.

That was the start of TCU’s troubles.

Louisville scored five times in the fifth, with all five runs charged to Storm Hierholzer. He recorded only one out.

Connor Oliver got the Frogs out of the inning and allowed a run in the sixth to stake the Cardinals to a 9-0 lead.

The Frogs (8-4) finally found some success at the plate after Louisville starter Jared Poland exited after six scoreless inning in which he allowed only two hits and two walks while striking out seven.

The white-hot Elijah Nunez and Brayden Taylor drove in three of the four Frogs runs in the seventh, and Louisville used five pitchers in a marathon eighth inning but escaped up 9-8. The final out of the inning was at the plate, where Luke Boyers was thrown out trying to score the tying run on a single by freshman David Bishop.

Boyers had brought the Frogs within two with a two-out, two-run single.

TCU returns to Lupton Stadium this weekend for a three-game series against Army. First pitch Friday is scheduled for 6 p.m.