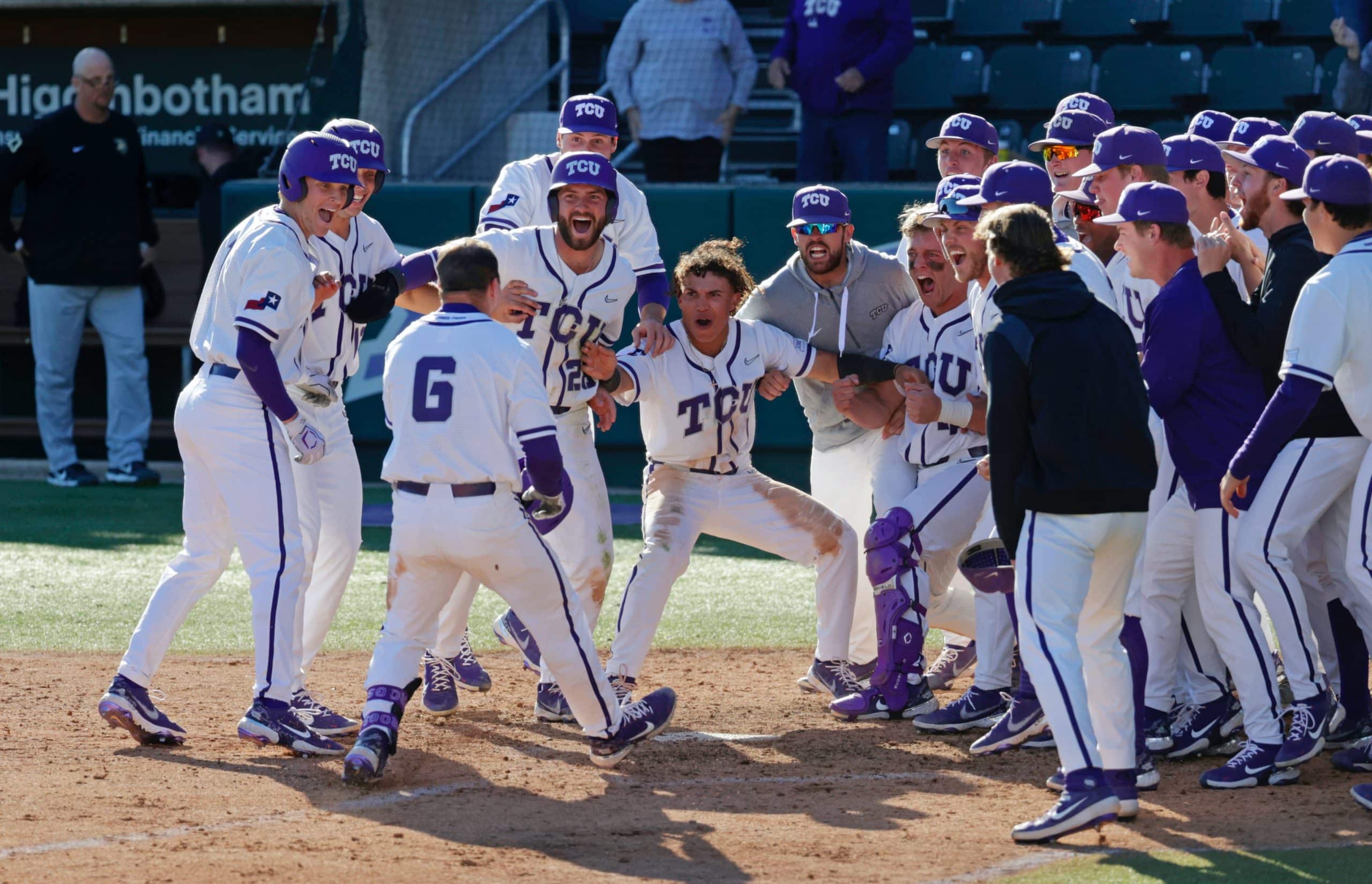 By Jamie PlunkettMarch 13, 2022No Comments 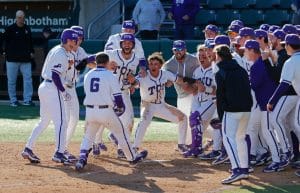 TCU took both ends of a doubleheader against Army on Saturday, clinching a series win in their first home weekend series of the 2022 season. Power finally made an appearance for the Frogs, who hit three home runs between the two games after hitting just five in their first 12 games.

With the series in hand, TCU will go for the sweep at 1 p.m. Sunday. Austin Krob will make the start.

Luke Boyers stepped up to the plate in the bottom of the ninth with runners on first and third, two outs, and TCU trailing 4-3. With one swing of the bat he gave TCU a Game 1 victory, ripping a walk-off home run down the left-field line.

TCU hit the ball hard all game, but had little to show for it before Boyers stepped to the plate. The Frogs stranded 11 runners, including five in scoring position, as they struggled to string hits together for most of the game.

Two of the runs allowed were self-inflicted, as the sophomore made two throwing errors on pickoff attempts.

In the first inning, Cornelio attempted to pick off Hunter Meade at first, but threw the ball past David Bishop. Meade advanced to second, and a sacrifice bunt moved him to third. A single from Nick Manesis drove Meade home, giving Army a 1-0 lead.

One inning later Cornelio attempted a pickoff at second base. It should have worked, as Kevin Dubrule was attempting to steal, but neither Tommy Sacco nor Gray Rodgers covered the base, and Cornelio’s throw ended up in center field. Dubrule came around to score for a 2-0 Army lead.

Army added to its lead again in the third inning, this time as Sam Ruta turned on a pitch from Cornelio for a two-run home run to right field.

Kurtis Byrne brought TCU back in the bottom of the third with his first home run of the season. Byrne took an 0-1 pitch over the left-field wall, scoring Gray Rodgers and Tommy Sacco.

Cornelio settled down after allowing at least one run in each of the first three innings, shutting out the Black Knights over the next two innings. While his pitches were effective most of the day, Cornelio needed a lot of them to get through five. His 101st pitch of the day induced an inning-ending groundout to Sacco, and Cornelio’s day was finished.

Freshman Cohen Feser has been called upon in a variety of situations early this season, and he was summoned in the sixth to keep things close. Feser gave the Frogs four strong innings of work, striking out four, walking none and allowing just two hits.

Feser’s efforts were supported by some stellar glove work from the Frogs’ defense. Sacco and Brayden Taylor both made plays that showed off their range on the right side of the infield, while Logan Maxwell and Elijah Nunez both made diving catches in the outfield to end innings.

All those efforts combined to give TCU a chance to take the win in the ninth inning, and Boyers delivered.

The Black Knights struck first, just as they did in game one.  A one out single from Derek Berg in the top of the second put Army on the board 1-0. One batter later, Cullen Horowitz hit a soft grounder to Taylor at third. Taylor, charging, only had a play at first as a second run came across to score.

Army added to its lead in the top the fourth by stringing several well placed hits together. Two singles to left field, followed by a double down the left-field line, brought three runs across.

Brett Walker gave way to Caleb Bolden with one out in the fifth. Saturday’s start was the first this season in which Walker failed to make it through the fifth inning.

TCU erased Army’s lead in the eighth. With two on and no out, Bishop singled to right field, scoring Nunez from second and moving Taylor to third. Rodgers followed with a double to deep left-center, bringing Taylor home and moving Bishop to third.

A groundout from Byrne brought Bishop home, and the Frogs tied it Luke Boyers reached on an error.

River Ridings came on to pitch in the ninth and worked around a two-out walk, giving the Frogs a chance at more Lupton Magic.

It looked like things were headed that direction when Reed Spenrath led off the Frogs’ the ninth with a double. Nunez worked a walk, and after a Taylor fly out to left, Bishop singled to left to load the bases.

Rodgers, who doubled the previous inning, grounded into an inning-ending double play to end the threat to force extra innings.

The Frogs didn’t miss their chance in the 10th. Porter Brown worked a two-out walk to load the bases for Nunez, who worked a walk-off walk to seal TCU’s victory.

Taylor hit from the No. 2 spot in the lineup while Bishop moved up into the No. 3 spot. Luke Boyers, who had been hitting in the two-hole, dropped down to the seventh spot in the order.

The Frogs worked 18 walks in the doubleheader, bringing their season total to 89 through the first 14 games. Nunez and Taylor were responsible for nine of those walks.

Watch the postgame conversations with Kirk Saarloos and Luke Boyers.