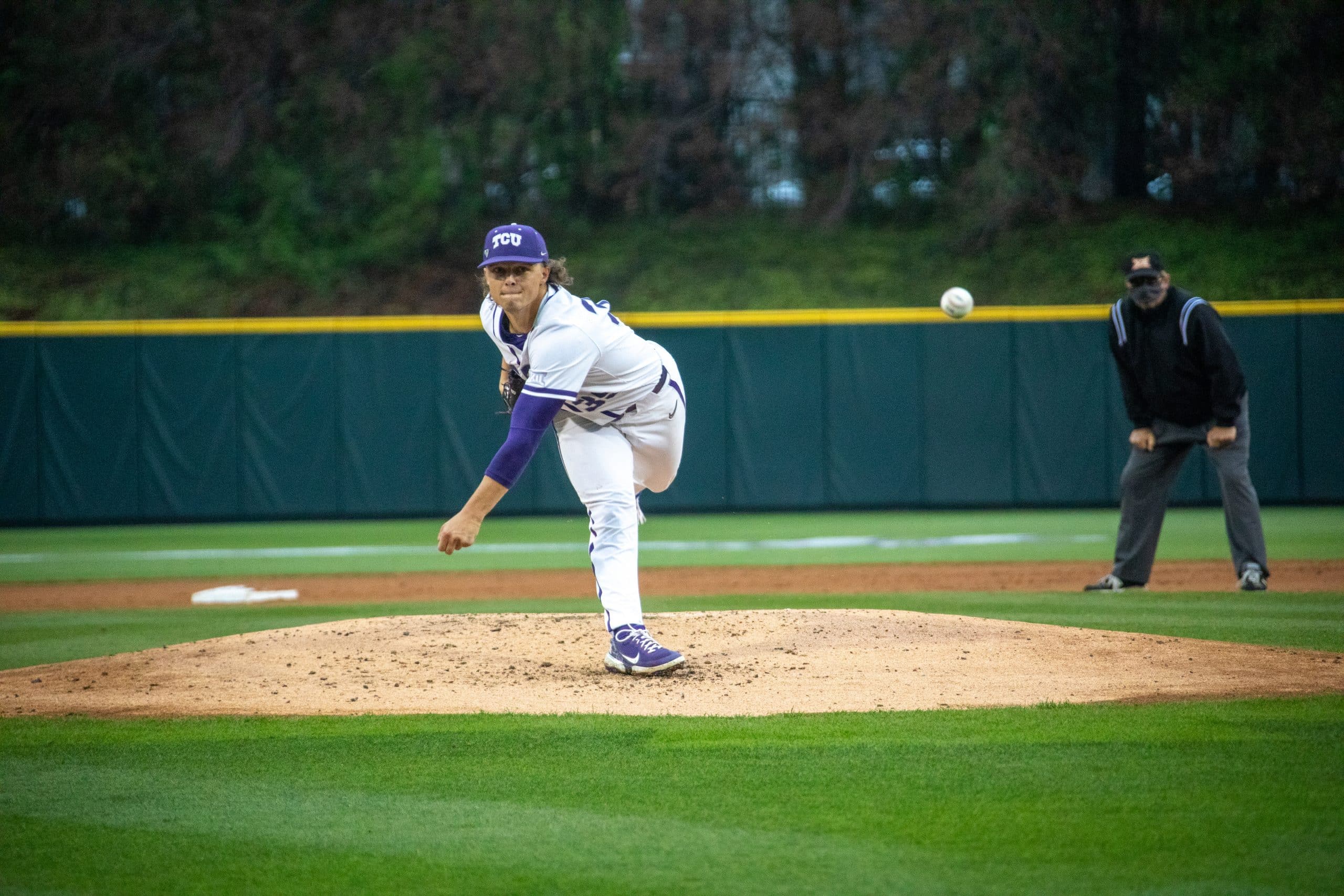 No magic needed as TCU Baseball completes sweep of Army

By Melissa TriebwasserMarch 13, 2022No Comments

Austin Krob settled in nicely after a slow start Sunday afternoon in Fort Worth. | Melissa Triebwasser for Frogs Today

TCU Baseball needed a double dose of Lupton Magic to secure a series win over the Army Black Knights this weekend, but the sweep was earned with considerably less drama, as the Frogs cruised to a 5-2 victory Sunday in Fort Worth.

Once again, the Horned Frogs fell behind their counterparts, as the Black Knights jumped out to a quick 2-0 lead after touching Austin Krob up for four hits in the first, including three straight singles. But unlike the previous two outings, TCU bounced back quickly, tying things up with the help of four consecutive walks and taking a 3-2 lead on a David Bishop sac fly.

That would about do it for the drama in this one.

Krob set the side down in order in the top of the third and worked around a base hit and a walk in the fourth. A double play in the fifth helped keep the scoreboard clean despite two more Army hits, and the Frogs added an insurance run in the bottom of the frame when Brayden Taylor singled, stole second, advanced to third on a sac fly off of Bishop’s bat, scoring on a Gray Rodgers groundout.

Luke Savage took over in the sixth, retiring the first five batters he faced as part of a really nice three inning outing. A pleasant surprise as a freshman, Savage’s start in 2022 had been slow, but his last two outings, including Sunday’s one hit, one walk, one strikeout performance is a positive sign going forward. Krob’s final line was solid if not spectacular, as he went five full innings, allowing two runs on seven hits with two walks and six strikeouts. Normally the Friday starter and expected to be the ace this season, Krob looked relaxed after the first inning and was confident even when up against some sticky situations, working out of a couple of jams. Whether he will remain the Sunday starter going forward remains to be seen.

Logan Maxwell picked up an RBI in the bottom of the eighth, singling home Tommy Sacco who led off the frame with a base hit. That gave way to Marcelo Perez, who allowed just one batter to reach base safely on a base hit in earning the save for TCU.

This was TCU Baseball’s first home series of the season, and winning is always better than losing. But there are questions for both the starting rotation (10 runs on 18 hits allowed) and the bullpen after the last few outings. Who will take the Friday night spot going forward? Will Krob staying as the Sunday starter? Kirk Saarloos has some decisions to make.

Kentucky did not treat Taylor well, but while he didn’t get a ton of hits this weekend (two on Sunday), he did manage to reach base safely seven times, including five walks. In all, TCU drew 25 walks against the Black Knights, including the winning run Saturday night and the first run of the ball game Sunday.

Luke Boyers dropped from second to seventh in the lineup for the series, and the changed seemed to do all kinds of good for the sophomore. Boyers blasted a walk-off three run home run in the series opener and finished the weekend with three RBIs, three hits, and two runs scored. But the best sign? He had just one strikeout on the weekend.

Boyers told our Jamie Plunkett that he definitely felt less pressure batting seventh, and it showed in his performance overall.

Ducks on the pond

Though there are so pitching questions, the most concerning thing to come out of the weekend might be the amount of players left on base. Across the three games, the Frogs stranded 27 runners, leaving a metric ton of runs on the board. Sure, Lupton Magic is fun, but needing two miracle comebacks against a three win team because you couldn’t push runs across early is not ideal.

You can’t say that TCU doesn’t get clutch hits when you need it, but maybe try getting them a little earlier in the game?

TCU completes in preseason with a home game against TAMU CC Tuesday before opening Big 12 play with Baylor in Waco Friday. The Bears are 8-6 on the season but hold impressive wins over UCLA, LSU, and a series win over a ranked Duke squad.