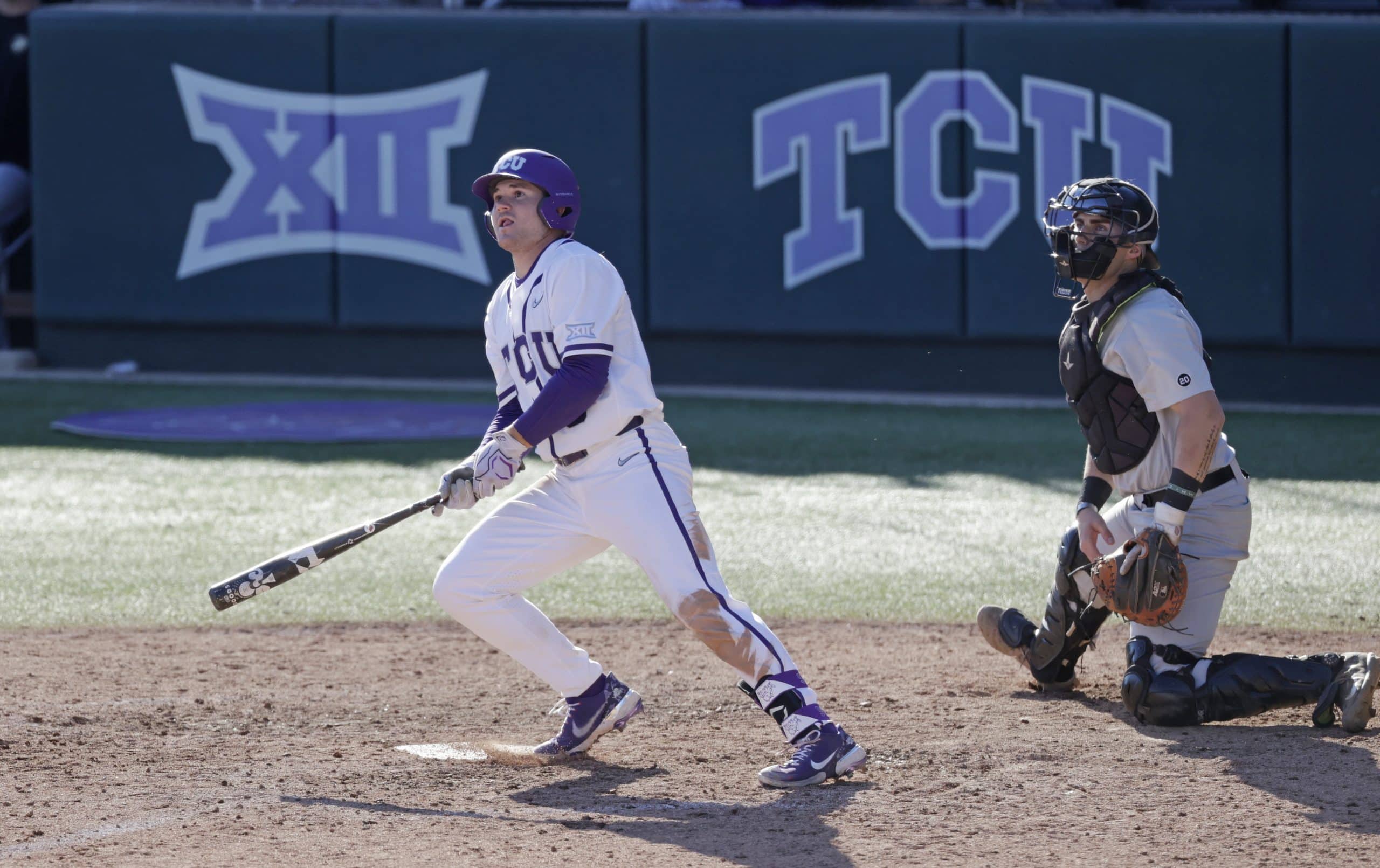 Luke Boyers was one of just two Horned Frogs to collect a hit Friday night in Tallahassee. (Photo by/Gregg Ellman)

TCU ran into a buzzsaw Friday evening, or maybe more accurately a spear, when they took on the Florida State Seminoles in Tallahassee in a non-conference matchup. Parker Messick was dominant for the Seminoles in leading his team to a 10-0 victory over no. 20 TCU.

The Frogs, coming off their best stretch of the season – one that included five wins in six games against top five opponents – fell flat against the Seminoles, watching as FSU built an early lead and never looked back.

Facing ace Messick, who came into the night 5-2 with a 2.93 ERA, the Frogs looked helpless at the plate early, as the lefty mowed down batter after batter. TCU went in order the first 4.1 frames, striking out seven straight times during a stretch that spanned the third through first out of the fifth. Reed Spenrath finally broke up with perfect game with a one out, full count, hit by pitch, but was eliminated a batter later when Kurtis Byrne grounded into an inning-ending double play.

Messick would get all the help he needed early in the first, as the Noles chased TCU starter Riley Cornelio before he had recorded an out. The first five batters reached safely, three via extra base hits, as FSU jumped out to a quick 4-0 lead. Cam Brown came on with two on and no outs and held the Seminoles to just one run on a groundout to minimize the damage. Brown was charged with two runs in the second as FSU tacked on three more hits, but worked around a lead-off walk in the third to hold the 6-0 score.

Florida State added two in the fifth on a home run to left center off the bat of Alex Toral, who had the opportunity to hit after Brown issued a two-out walk. Down 8-0, the Frogs got their first hit of the night when Luke Boyers led off the top of the sixth with a double that snuck just inside the third base line. Messick responded by striking out the side, finishing with a filthy breaking ball to Elijah Nunez.

TCU went to the pen in the bottom of the sixth, calling on Drew Hill. Hill recorded two quick outs before issuing back-to-back free passes, and a two out double off the bat of red-hot Reese Albert made it 10-0. The Frogs got a runner in scoring position for the second time when Tommy Sacco singled and was balked over to second, but Messick got Brayden Taylor to line out and struck out David Bishop and Spenrath to end the threat. The seventh would be a final frame, giving him a final line of 7.0 innings of shutout baseball, allowing just two hits, walking none (one HBP), and striking out 14.

Freshman Trip Banta pitched a 1-2-3 bottom of the seventh, his third appearance of the season. Storm Hierholzer made his sixth appearance in the bottom of the eighth and struck out one while allowing just one hit. Ross Dunn came on for the Noles in the top of the eighth and set the side down in order himself, notching two more strikeouts for FSU; he would strike out the side in the ninth. In all, the Frogs would strike out 19 times on the evening.

It’s the second straight Friday night blowout for TCU, who dropped the opener at Oklahoma State 13-2 a week ago. But much like they did in Stillwater, the Frogs have the chance to bounce back and win a series at FSU this weekend. They will turn to Marcelo Perez Saturday to try and turn the tide.