By Jamie PlunkettNovember 7, 2022No Comments 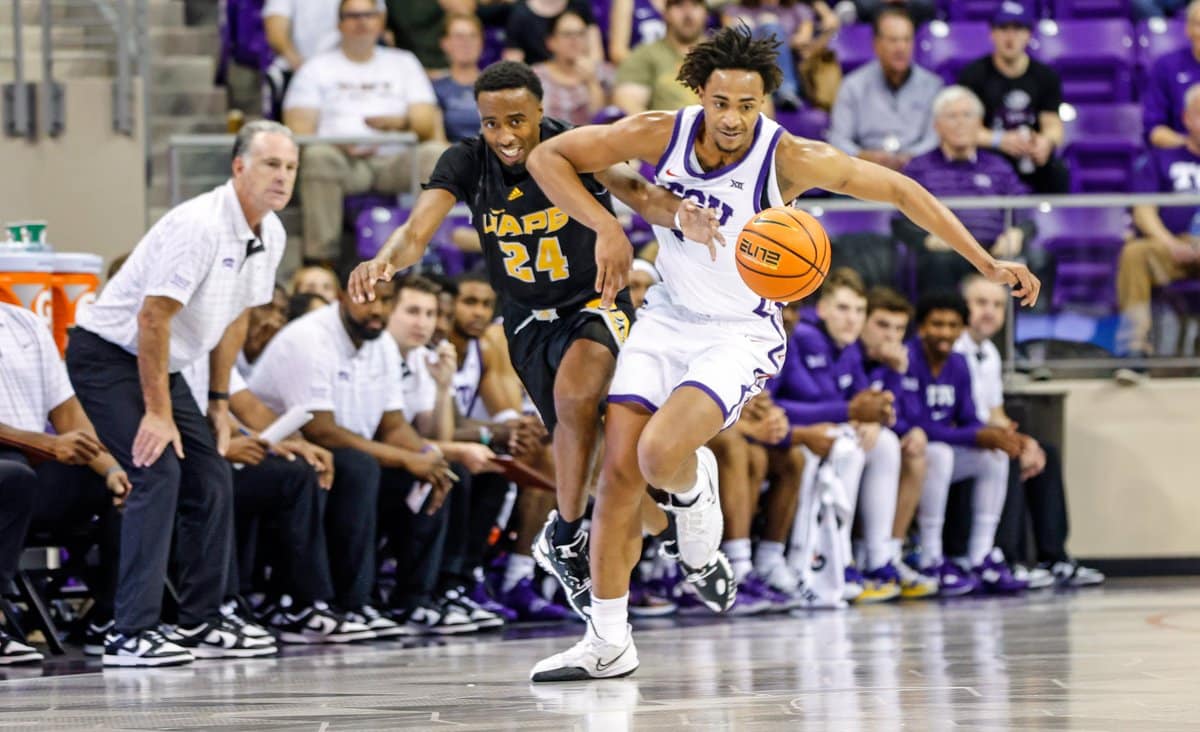 Chuck O’Bannon battles for a loose ball in a closer-than-expected win over Arkasnas-Pine Bluff (TCU Basketball).

FORT WORTH — Trejone Ware’s shot at the buzzer had hope, but it rattled off the rim. As the ball fell harmlessly to the ground, so did Arkansas-Pine Bluff’s upset bid. It would have been an inexcusable loss for TCU to open the season, but the No. 14 Horned Frogs found a way to survive against a Golden Lions squad that never looked or felt outmatched.

Emanuel Miller led the Frogs with 19 points, including 15 in the second half, while pulling down five rebounds in the 73-72 victory. Mike Miles Jr. scored 15 points, including the go-ahead 3-pointer with 51 seconds left in the game, to go with six rebounds and three assists.

Chuck O’Bannon led the Frogs with seven rebounds, contributing 11 points as well. Eddie Lampkin Jr., who everyone heralded for his performance during the NCAA Tournament, finished the game with two points and two rebounds in 27 minutes.

All of the expectations and preseason accolades seemed to weigh heavy on the Horned Frogs’ shoulders early on, as they started just 2-of-16 from the floor and looked out of sync on both ends of the court.

TCU was picked to finish fourth in the Big 12 preseason poll and was ranked No. 14 in the Associated Press preseason poll following an NCAA Tournament berth back in March. With all five starters returning, the Frogs were expected to be good again this season, but a game like this is an indicator of something, according to coach Jamie Dixon.

“Everybody’s been telling us how good we are,” Dixon said. “To come out and play like this was an indicator of a lack of maturity, and not handling being talked about a little bit.”

The Frogs began a slow climb out of the hole thanks to some foul trouble for Arkansas-Pine Bluff. TCU shot 16-of-21 from the charity stripe in the first half, while the defense clamped down slightly on the perimeter shooting and allowed the Frogs to cut into the deficit.

O’Bannon hit TCU’s first 3-pointer with 25 seconds remaining in the first half, cutting the deficit to 46-35. That’s where the score would stay at the break.

The Frogs came out of halftime without much time to warm up, as the coaches clearly had a lot to say to the team after such an abysmal start.

Whatever was said worked, as the Frogs came out more focused in the second half.

Miller scored the first eight points of the half for the Frogs as they continued to climb out of the hole they dug. Pine Bluff couldn’t find its hot shooting touch, starting the half just 2-for-7 from the floor and making only two 3s the rest of the way.

Meanwhile, the Frogs locked down defensively, forcing six turnovers in the first seven minutes of the half as they reclaimed the lead.

Lampkin was quiet most of the night, but he was there when the Frogs needed him. With 12:57 left in the game, he made his first and only basket of the night to give the Frogs a 52-50 lead. It was TCU’s first lead since the 18:12 mark of the first half.

Lampkin was fouled and did his patented “small man” celebration following the basket, but missed the free throw.

Arkansas-Pine Bluff refused to fold, though, simply outworking the Horned Frogs for loose balls and rebounds. After a back-and-forth final 10 minutes, the Golden Lions moved ahead 70-68 with 1:45 to play in the game.

Miles, who had gone to the bench with a calf cramp minutes earlier, hit a 3 to put the Frogs ahead 71-70 with 51 seconds remaining. TCU then forced a shot clock violation on the defensive end to get the ball back.

Two O’Bannon free throws seemed to put the game away, but Pine Bluff went down to the other end and scored, making it a one-point game. O’Bannon then missed the front end of a 1-and-1, giving Pine Bluff their final opportunity to come away with an improbably victory.

Fortunately for the Frogs, that didn’t happen, and they can allow this one to serve as a wake-up call while also marking it in the win column.

“We have to know that everyone moving forward is going to give us our best shot,” Miller said.

The Frogs have a chance to bounce back and start a winning streak Friday, when they host Lamar at 7 p.m at Schollmaier Arena.