LAWRENCE, Kan. — Kansas’ fans began filtering out of historic Allen Fieldhouse with just under five minutes remaining, stunned after watching TCU blow out the Jayhawks 83-60 on Saturday afternoon. It was arguably the biggest-regular season win in TCU program history, and the Frogs’ first win against the Jayhawks on their home court.

Shahada Wells led the way for the Frogs in what was easily his best performance in purple. The UT-Arlington transfer scored 17 points while notching five rebounds and four steals. Mike Miles Jr. added 15 points and four assists, while Damion Baugh contributed 11 points.

After a disappointing loss Wednesday at West Virginia, the Frogs needed a bounce-back game. That’s hard to get at Allen Fieldhouse, where the No. 2 Jayhawks were a perfect 10-0.

The Jayhawks’ ranking, a sellout crowd and an historic arena didn’t seem to intimidate the Frogs, however, as they built a double-digit lead early. Damion Baugh was key to the Frogs’ early run, scoring nine points in the first three minutes of the game.

The Frogs grew their lead to as many as 22 in the first half, forcing Kansas coach Bill Self to call three early timeouts to try and energize his team. Self earned a technical foul at the 9-minute mark of the first half for arguing about a traveling violation. Miles made the free throws, pushing TCU’s lead to 37-15.

Kansas responded following the technical foul, putting together an 11-0 run. Gradey Dick made two 3-pointers to help the Jayhawks back to within 11, 37-26, as the crowd rediscovered their voice.

TCU grew the lead back to 19 before Kansas closed the half on an 11-2 run.

Eddie Lampkin suffered a high-ankle sprain late in the first half. TCU’s center went down after a layup attempt, and stayed down on the baseline for several minutes. Eventually, Lampkin was helped back to the locker room to be evaluated.

Lampkin attempted to play in the second half but was clearly hobbled.

Meanwhile, the Frogs worked their lead back out to 15 points over the first nine minutes of the second half. Emanuel Miller and Xavier Cork both made good post moves to get baskets as the Frogs’ continued to move the ball well on that side of the court.

The pace of the game slowed tremendously, though. After the teams combined for 37 points nine minutes into the first half, TCU and Kansas totaled just 18 over the same amount of time in the second half.

TCU’s objective in the second half was clear — slow things down on offense and clamp down defensively. The Frogs managed that all the way down to the 7:22 mark of the second half, as they held a 66-50 lead with the Jayhawks shooting just 5-of-23 after the break.

The Frogs’ methodical offense and lock-down defense slowly squeezed Kansas into submission as the clock continued to tick toward zero. Cork, playing more with Lampkin injured, and Wells continued to shine as TCU extended its lead to 79-54 with under four minutes to go.

The Frogs were once again without guard Micah Peavy, who continues to deal with a back issue. TCU reiterated after the game that Peavy continues to be day-to-day.

TCU has a quick turnaround to get ready for a home matchup Tuesday, when Oklahoma visits Schollmaier Arena. 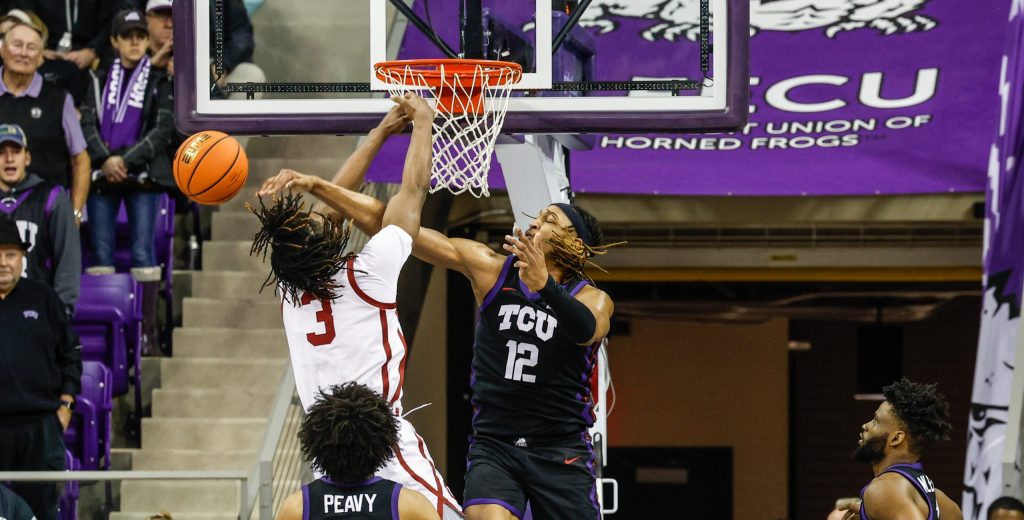